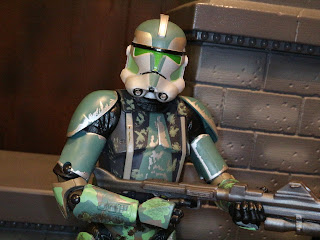 I've been on vacation for a week or so, meaning that there haven't been any new reviews lately. That's going to change starting now because I have a ton of good stuff lined up to show off, starting with the Toys 'R Us exclusive Clone Commander Gree from Star Wars: The Black Series.  Gree was released as an exclusive during SDCC but he's going to be available in Toys 'R Us stores everywhere, similar to the R2-A3, R5-K6, and R2-F2 three pack from last year. Like many Star Wars fans I love collecting different Clone Troopers, especially the named troopers who appeared in The Clone Wars. While Gree first appeared in Revenge of the Sith, TCW gave the character a personality, making his death in ROTS tragic upon rewatching it. I'm still amazed by how TCW makes the prequels so much better! Anyways, we're not here today to talk about the prequels and TCW, though, are we? We're here to talk about Clone Commander Gree! Toys 'R Us has had a few exclusive Black Series figures over the years, but I do believe that Gree is the most desirable. One thing that's worth nothing is that he retails for $25 dollars, $5 dollars more than your average. Apparently, Hasbro has stated that this is because of his more intricate paint job. Do you think CC-1004 looks better than your average Star Wars: The Black Series figure? Let's take a closer look at this figure after the break... 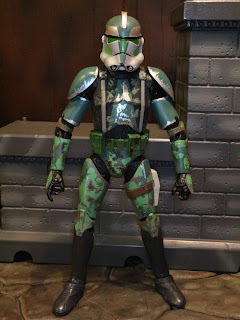 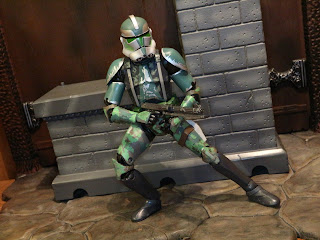 * To start things off, I will point out that Commander Gree is largely the same as the other Phase II Clone Troopers that have been released in the various exclusive sets. Most of the figure (except for the torso and left hip) are reused, so the articulation is the same, too. Check out that review for the full scoop as I'm mostly going to point out what's new here. 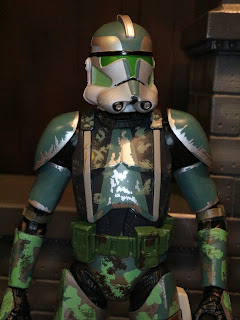 
* The torso is new and it looks pretty cool. It's not very different, but it does have the addition of extra sculpted shoulder straps. I really do appreciate that Hasbro doesn't use paint work to create costume elements on these figures; if it's an actual part of the costume, the character tends to get a newly sculpted item. 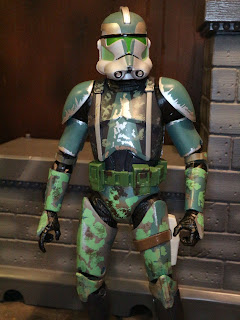 * The paintwork is really cool on Commander Gree. I'm not sure that I buy Hasbro's claims that the figure costs $5 more because of the paint job (many NECA figures have more intricate paint jobs at lower prices) but I do like the overall look. Gree is wearing camouflaged armor that features lots of wear and tear and weathering, so there is a lot going on here and it looks pretty impressive. Not anything that's going to make non-fans take notice, but still cool. 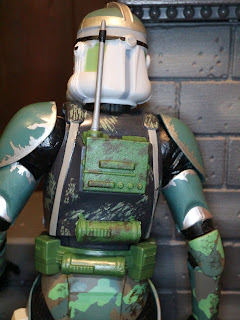 * Gree's back armor also features some unique tooling. He has a more sophisticated panel on his back with a removable antenna (it's very small, so be careful not to lose it!) and an extra explosive charge on his lower back. The mixture of the newly sculpted parts and the intricate paint job really makes for an impressive figure. 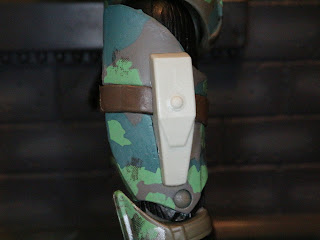 * This is a pretty small detail, but it's cool to see that Hasbro didn't neglect this little pouch on Gree's left hip. It's all a newly sculpted piece and it looks quite authentic. 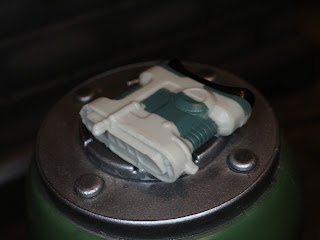 * Commander Gree includes a set of macrobnoculars. This is a new accessory and it looks pretty solid. I do wish it featured a green paint application for the viewscreen, but overall it's a nice accessory. We don't always see unique accessories with exclusives, so this is definitely a cool extra. 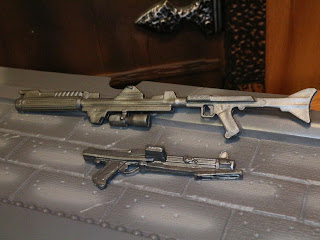 * Gree comes with the same weapons as nearly every other Clone Trooper in the Black Series: The DC-15A (short blaster) and the DC-15 Blaster Rifle. They're cool and I like the gunmetal plastic they're molded in, but it's odd that they don't have any paint applications considering some of the earlier troopers have had paint applications on their blasters. 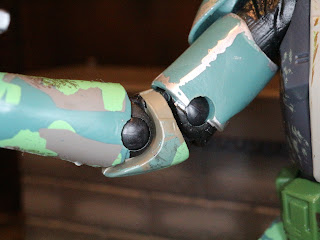 
* Rubbery joints have returned! Unlike some of the more recent Clones and Stormtroopers, Commander Gree's elbows feel a but too rubbery. Sometimes you are moving the joint while other times you're just bending the elbows. 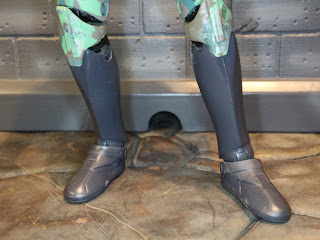 * Considering the weathering the rest of the figure has, Gree's squeaky clean boots just look out of place. Having plain boots is definitely accurate, but a few scuffs or some authentic Kashyyyk dirt paint applications would have improved their appearance. 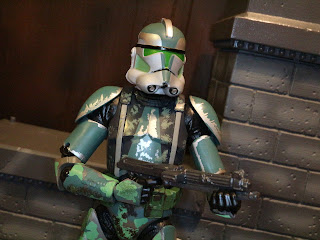 Commander Gree certainly looks pretty cool, although it is safe to say that he has all of the strengths and all of the weaknesses of the previously released Phase II Clone Troopers: Good sculpting, good articulation marred by the shoulder pads and the neck, and two nice blasters that are missing paint applications. I like what's new here, though but, with the little faults here and there and the $5 price jump for "premium" paint applications, he's not as satisfying as he could have been. Clone Commander Gree is a Good figure; you won't be disappointed in him but you may not be wowed, either.

I haven't reviewed any other action figures of  Clone Commander Gree but I have reviewed plenty of other figures from Star Wars: The Black Series Phase III: