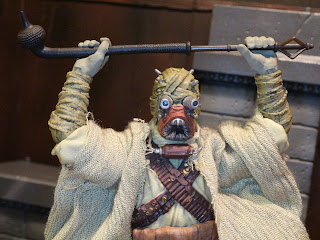 It's been a month since I last reviewed a figure from Hasbro's Star Wars: The Black Series, but guess what? I've found quite a few more! These figures, both the 40th Anniversary Series and the regular Black Series releases, have been pretty tough to find. The Tusken Raider was simultaneously released in series 2 of the 40th Anniversary series and in the most recent Black Series set alongside of Lando Calrissian and the Royal Guard (reviews are coming!) but I managed to find the standard boxed Black Series version on Amazon for MSRP, so I picked him up. I really like this guy, and it isn't just because he has a precedent as both a vintage Kenner figure and a POTF2 release. The Tusken Raider really feels like a Black Series release that gets back to the heart of what the Black Series originally felt like: A fairly definitive action figure release. Since he includes a gaderffii stick with three interchangeable heads and a rifle, this very well feels like the only male Tusken Raider figure you would ever need. I like that "deluxe" feel, even on a army builder (although this very well might be URoRRuR'R'R), and it makes the line feel like it's really doing something special in the same way that the earliest Phase 1 releases did. Let's take a closer look at this Tusken Raider after the break... 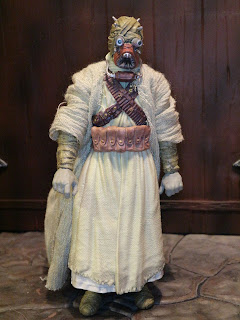 Accessories: Gaffi stick base, three staff heads, and a rifle. 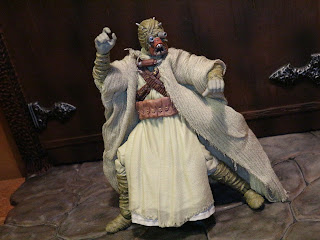 * The Tusken Raider has all of the articulation you'd expect from a black series figure and it's all pretty useful, too. Even with his inner robe being made of a heavier but pliable plastic, the slits on the side still allow for lateral leg movement. He has a tough time with rifle poses, but any gaffi stick battling poses look incredible.


*The use of an actual soft goods outer cloak here was a great choice. I love the material and the fit. It captures the rough, nomadic vibe of the Sand People. 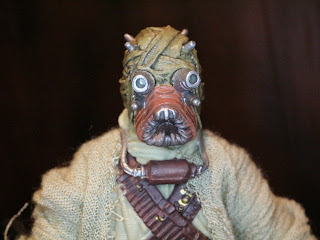 * Overall I'm really happy with this headsculpt. I have one issue, but I'll get to that in a moment. let me just present that the sculpting and the paintwork look incredible here, especially the work on the wraps around the head and the small metal parts. The breathing apparatus below the head is also really cool, and it appears to be a separate piece to give a more three dimensional vibe to the Tusken Raider's outfit. 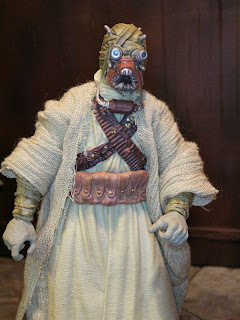 * The overall sculpt of the body is also excellent. The mixture of the soft outer cloak and the sculpted inner robe meshes really well, much better than I expected. The sculpted bandolier and belt also look pretty solid.

* The paintwork adds a bit to the dirty feel of the figure, as do the visible parts of the inner outfit such as the wrapped wrists and feat. Great sculpting and great paintwork are features on both of those parts. The color choices and execution on the paint really sells the worn, lived in appearance of the costume. 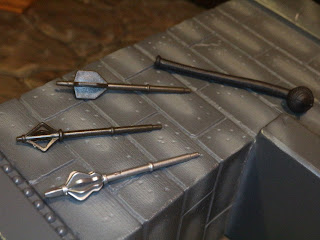 * Not only does the Tusken Raider come with a gaderffii (gaffi) stick, but he also includes three alternate heads. The heads slip into the base of the staff quite easily and give you the option to add some variety to your figure if you're planning on army building these guys. They swap easily and feel pretty secure when on display. 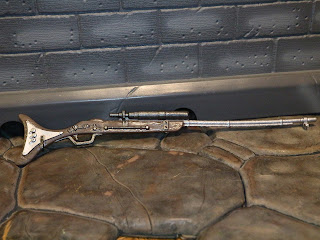 * The rifle included with this guy might be one of the nicest accessories in the Black Series. The sculpt is killer and the paintwork appears very, very intricate. I'm loving the look of this piece! 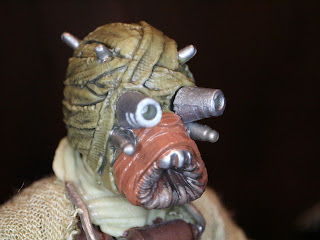 * I do have a few complaints, however, and the first is that the eye tubes do appear to be a bit too long. It's not as noticeable from the front but from the side the eye tubes look a bit strange. Is it just me or is this really film accurate? I don't think it looks accurate, but I could be wrong. 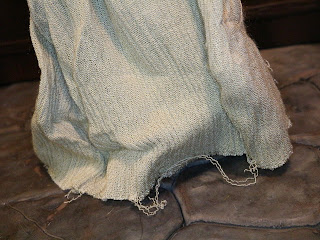 * My second complaint is with the outer robe. I love the look, color, and fit of the cloth outer robe, but I'm definitely not digging the fact that the robe already appears to be unraveling a bit. I'm totally cool with a rougher, frayed appearance (the Sand People don't seem like the type to go to a tailor or a dry cleaners) but the dragging strings definitely seem problematic. I'll probably try to just trim them up. 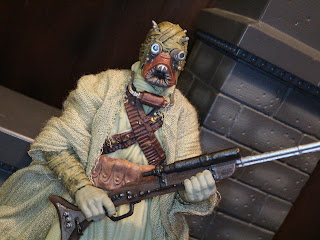 I really think the Tusken Raider is one of the nicest figures in the Black Series. I love his appearance, the sculpting and paint, and the mixture of fabric goods with sculpted details. Toss in some incredible accessories and the Tusken Raider feels like a very worthwhile release. I do wish his robe wasn't fraying (and that his eye tubes were a bit shorter), but overall I feel like this is a pretty strong release. This is a Great figure and well worth picking up. Heck, buy multiples and you can even have Anakin slaughter them all!

I haven't reviewed any other Tusken Raider action figures on the site before, but I have reviewed plenty of other Star Wars: The Black Series Phase III releases, including: