Road to The Rise of Skywalker: Cal Kestis from Star Wars: The Black Series Phase III by Hasbro 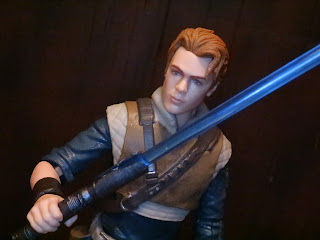 The next few months are going to be crazy for Star Wars fans: Besides the massive amount of new action figures (well, at least The Black Series figures as the traditional 3 3/4th line has gotten the short end of the vibrostaff) and books that are being released there is the premiere of The Mandalorian on Disney+ on the 12th of November, the release of Star Wars Jedi: Fallen Order on the 15th of November, and The Rise of Skywalker on December 20th. Today I'm checking out Cal Kestis, the protagonist of the video game Jedi: Fallen Order. Cal Kestis was one of the initial Triple Force Friday offerings and was one of the figures I most wanted from the initial batch (I still haven't found my most wanted figure, the Mandalorian himself). Kind of like Kanan Jarrus/ Caleb Dume, Cal Kestis is a Padawan who survived Order 66 and is hunted by the Empire. I have high hopes for the game as it's been awhile since we had a Star Wars game designed as a single player story and it's always fun to lose yourself in a playable version of the Star Wars galaxy (I liked the campaign in Star Wars: Battlefront 2, but it was clearly designed as a multiplayer game first). Let's see how Cal Kestis turned out after the break... 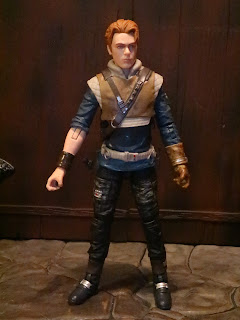 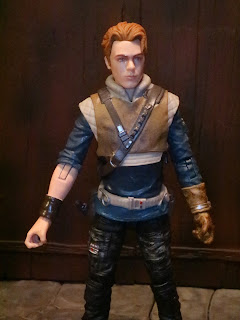 * Cal Kestis definitely has a very "Star Wars" look to him. He looks more like a smuggler or a mercenary than a Jedi, which is probably much to his benefit since he's trying to avoid the Empire. Cal's vest isn't removable bit it is a separate piece over his torso which gives a more realistic, layered look to his outfit. Working as a scrapper, Cal carries quite a bit of gear on him. For some reason whenever I look at his outfit I think of Kyle Katarn from Dark Forces. I don't know why, either. There's just something simple and understated about it that makes me think of Kyle's basic duds. I loved Dark Forces as a kid and I was thrilled when Kenner finally released a Kyle Katarn figure. I'm kind of upset we never got an Iden Versio from Battlefront II's campaign. 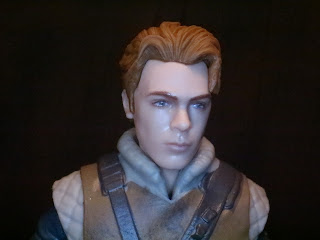 * Like Iden Version, who was voiced by and modeled after Janina Gavankar, Cal Kestis is voiced by and modeled after Cameron Monaghan. The likeness is very good and, like the rest of the Black Series line, the figure is presented in a realistic style that fits right alongside the movie based figures. Cal uses the faceprinting technology to great effect and has some seriously excellent hair as well. 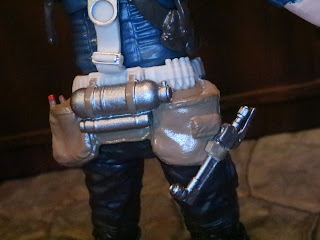 * Cal is toting around a number of tools and gadgets, all of which are sculpted and painted on the figure. They're hanging from various hooks and pouches off of the back of his belt. 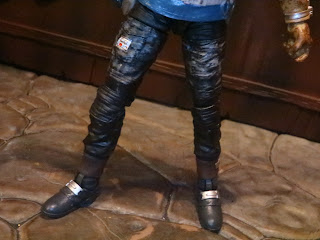 * Hasbro actually gave Cal's legs a very interesting drybrush effect which adds a lot of detail and texture. These definitely look like the pants of someone who collects scrap all of the time. 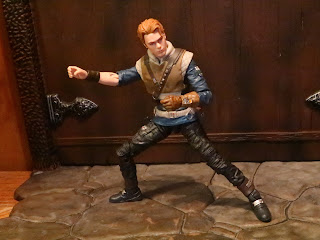 * As has become standard with this line, the articulation is pretty darn near perfect. Hasbro has a great articulation model for the Black Series and it feels like just the right mixture of form and function to make these figures fun to pose while looking great on display. The double balljointed heads Hasbro has been using lately are just fantastic, too, and it looks great with Cal here. 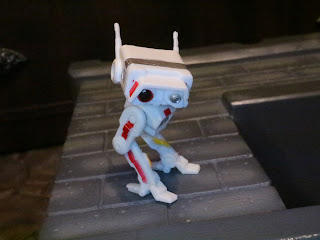 * Cal Kestis comes with his droid buddy BD-1. Designed to help aid in exploration, BD-1 accompanies Cal and appears to often ride on his shoulder. Interestingly enough, apparently both Snoopy and Woodstock were inspiration for this droid. He's a cool little guy with great paint applications and a unique look. He kind of reminds me of a pair of macrobinouclars combined with an AT-ST. 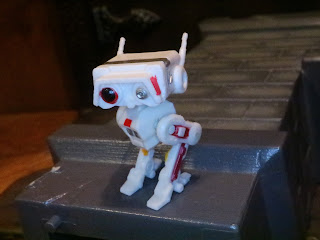 * Not only is BD-1 a cool looking droid but he also has quite a bit of articulation for a figure only 1 3/8ths inches tall. He's got swivel knees, swivel and balljointed hips, and a balljointed head. 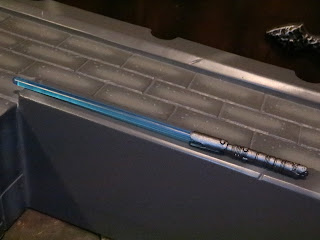 * Cal Kestis comes with his lightsaber. Build-wise it's not much different than any other Black Series lightsaber although the hilt is a unique design. It's very long, nearly twice the length of a standard lightsaber hilt. I'm curious if there's anything unique about it or if it's just a design choice that Cal went with. 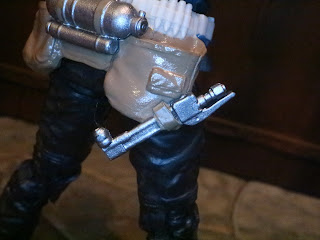 * I really wish a few of the tools Cal toted around were removable. This tool definitely looks like it should have been a separate piece that could be removed from Cal's belt, right? 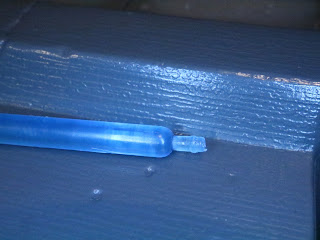 * Be careful with removing the blade! The pegs on the blades seem so fragile, and I really wish Hasbro would just offer up an extra hilt in the package alongside of the standard lightsaber. That would be a much better option with less risk of breakage. 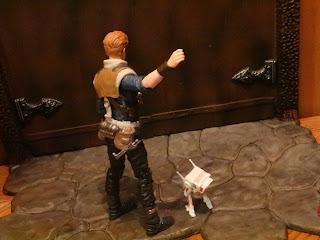 * Even the front of Cal Kestis' package shows BD-1 riding on his shoulder. It's too bad, then, that the droid can't attach to the figure in any way. This would have been a really cool feature and a fun way to display Cal with the droid. You can kind of fudge things by slipping BD-1's legs between the straps of Cal's vest, but it doesn't stay on well and looks kind of weird. 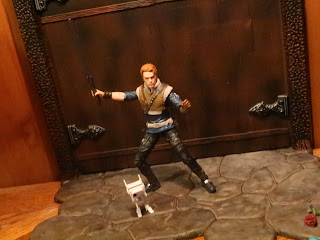 While Cal Kestis is largely unknown to us until next Friday (although GameStop has a Thursay launch event at some stores), the figure turned out pretty nice. It's always interesting to pick up figures of Star Wars characters we haven't been introduced to yet. I have high hopes for Jedi: Fallen Order and hopefully will be a solid protagonist for the adventure. This is a Great figure that really only takes some hits because Hasbro could have added more functionality. I really wanted BD-1 to be able to attach to the figure! Still, this is a cool figure from a non-move source, which makes him feel a bit me unique.