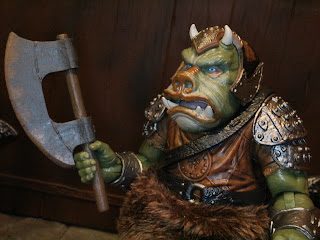 I was very, very excited to find the Target exclusive Gamorrean Guard on a Target run this past Thursday. While I love the Black Series it definitely has a severe shortage of aliens, particularly aliens from the Original Trilogy. The Gamorrean Guards are some of my favorites and I'm pretty excited to finally get them. We've had Jabba the Hutt for quite some time now so it's nice to finally have some other characters to pal around with him. The Gamorrean Guard is a portly figure and, unusually, costs $30 bucks at Target. Usually exclusives cost a few bucks extra but the Gamorrean Guard is about $10 bucks more. He's definitely heftier than most figures, so maybe that's the reason why? To be honest, I wanted him so bad that I didn't care; I just bought him. Let's check him out after the break... 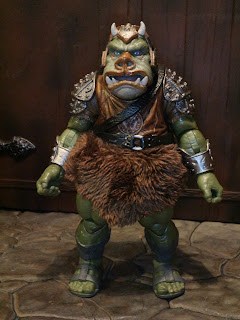 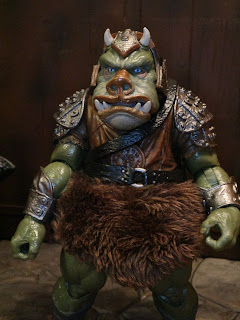 * The Gamorrean Guard looks fantastic. He has some excellent paint work, an incredible sculpt, a thicker than normal size, and the inclusion of soft goods for his loincloth. He is very well done and definitely stands out as one of the coolest figures Hasbro has made yet. 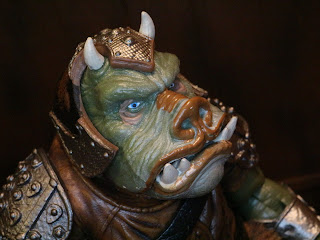 * The headsculpt is also quite good. I love the work on the eyes, the helmet, and the wrinkles on the Gammorean's porcine face. The paint on the nose and mouth might seem a but too heavy but I think it actually matches the film costumes from Return of the Jedi rather well. 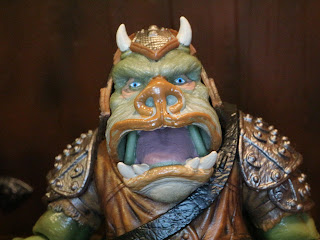 * Like Admiral Ackbar, the Gamorrean Guard also features a hinged mouth. He looks rather silly with the mouth fully open but the hinge does allow you to give him some smaller, open mouthed expressions that do improve the look of the figure and might help each figure to stand out if you decide to army build these. 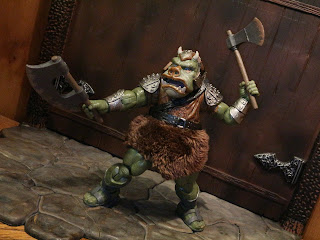 * Due to his shape, the Gamorrean doesn't initially feel as well articulated as your standard Black Series figure. That's not true, though, as the Gamorrean actually has as many joints than your standard figure (more if you count the mouth) and, with a little effort, you can get some very battle ready poses out of him. He isn't as havy as you may think, though, as his stomach/ waist is actually an overlay over a more standard body, just FYI. 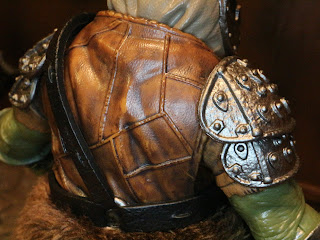 * There is some rather impressive sculpting and detailing on the Gamorrean Guard's armor. His leather tunic has a nice dark dry-brushing effect while the metal elements, such as the shoulder pads, look incredible. Also, the bandolier the Gamorrean Guard wears his a separate piece that can shift around a bit. It might be removable with some effort, but I don't really want to mess with it. 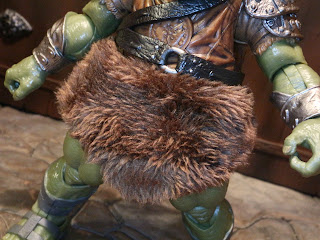 * The Gamorrean Guard features a soft goods loincloth to cover his nether regions and it actually works quite well. I like the shaggy look of the loincloth and the color matches up pretty nicely with the tunic. It helps make him feel a bit more "deluxe" than he would if the loincloth were just made of plastic. 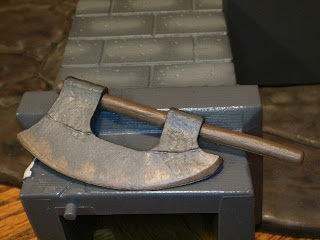 * The Gamorrean Guard includes three weapons, the first being the vibroaxe that I most associate with the vintage Kenner. Gamorrean Guard figure. It's my favorite and I love the paintwork here. It's excellent with nice, rusty dry-brushing. 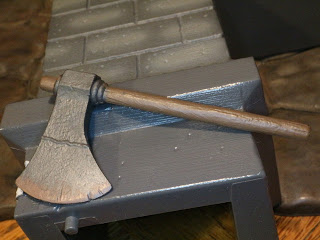 * The second weapon is a simpler looking ax. It has the same rusty looking blade paintwork as the first one but it has a smaller blade. This is the style of ax that came with the Power of the Force II Gamorrean Guard, so that's what I always associate it with. 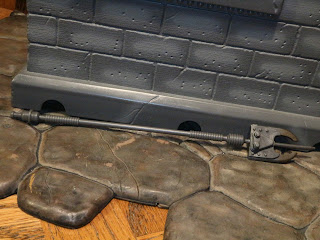 * Last, but not least, is a vibro-staff. It features some minor paintwork on the head but it otherwise just cast in a darker grey plastic. It's still a very cool accessory, though, and the presence of three axes gives you a few cool options to display your figures with. 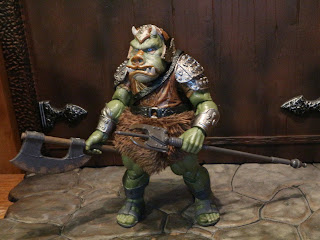 He might be a few bucks more than a standard figure in the line but  think the Gamorrean Guard is definitely worth it. Excellent sculpting, a fabric loincloth, three nicely done weapons, and an articulated jaw definitely makes the figure feel fairly deluxe. Maybe not as deluxe as I might expect (Bubo would have been a great inclusion here) but still worthwhile purchase. He's still an Epic figure and one that gives me hope that Hasbro may soon dive more into the creatures and aliens from the Original Trilogy and Prequels.