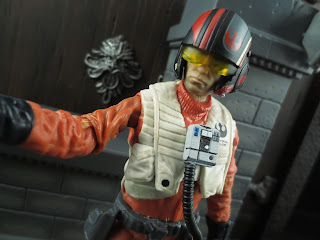 Here's another figure I recently acquired in a trade: Poe Dameron from Star Wars: The Black Series Phase III! While I reviewed Poe in the more casual jacket he eventually gives to Finn back in December, this figure represents Poe in his pilot's gear. While Poe might have more screen time while wearing the more casual jacket, the pilot outfit is definitely more recognizable from publicity materials and other sources, such as Before the Awakening. While Poe gets the least amount of screen time of the three new lead heroes, he still strikes a chord for me and I'm really curious to see his character get more fleshed out. I love his relationship with BB-8 and I'm considering going to Charlotte HeroesCon this summer as Poe in the more casual jacket, particularly since my little one loves her BB-8 costume so much! I think we'd be an awesome team, just like the real Poe and BB-8. Anyways, ready for a closer look at the man referred to as "one helluva pilot" by Finn? Then join me after the break... 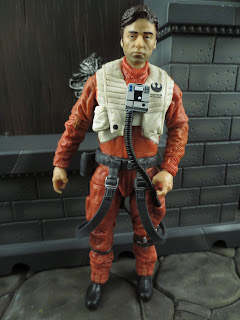 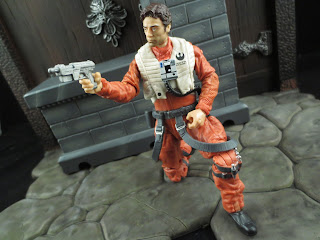 * Considering that Poe is wearing a somewhat baggy outfit with some excess straps and harnesses, his articulation is really well done and quite functional. He's a fun figure to play with as Poe always juts looks and feels ready for action. He's really sturdy too. That's always a plus. 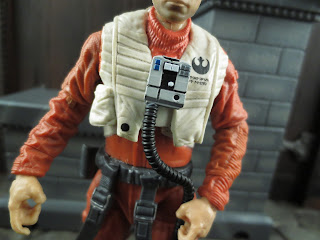 * I really think that Poe Dameron has some of the best sculpting and paintwork of any figure in the Black Series. His flight suit and life vest just look incredible as the paintwork and wash really bring out the excellent detail. His FreiTek life support unit (which apparently is kind of a good luck charm for Poe) also has some incredible detail. The work on Poe's outfit is absolutely what I want and expect from the Black Series. 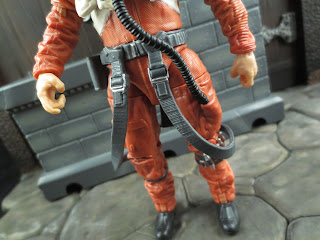 * Here's a closer look at the straps hanging off of Poe's belt and the black tube entering into a pocket on his left thigh. All of these extra components are fairly flexible but feel nicely durable, so I'm not to worried about breakage. They look awesome and really add to the busy but functional appearance of the uniform. Also, you can see more of the flight suit's really pleasing reddish orange color. I love this outfit! 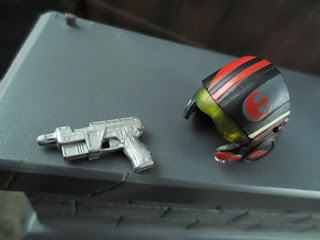 * Poe comes with two accessories: His helmet and a Glie-44 pistol. I'll talk more about the helmet in a minute but for now I'll just say that it has a very detailed paint job, fits perfectly on Poe's head, and has very nice looking translucent goggles on the front. The Glie-44 pistol (based on a SIG Sauer P226) has a very satisfying bulk to it and fits really well in Poe's right hand. 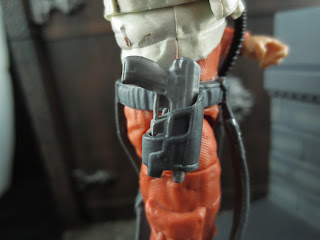 * The Glie-44 blaster pistol tucks nicely into the holster on Poe's right hip. I love that he has a place to store this, especially since Luke in his pilot gear didn't. 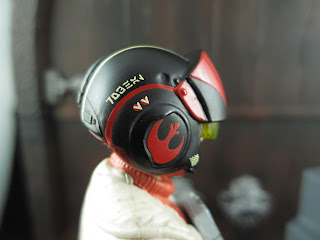 * Since Poe has the designation of Black Leader and commands both Red Squadron and Blue Squadron for the Resistance, it makes sense that he'd have a pretty wicked looking helmet to show that he's the top dog. Well, he does and it looks incredible. I love the detailing on the side of Poe's helmet! His unique helmet nicely pairs with his customized black and orange T-70 X-Wing, Black One. This is really a gorgeous accessory. 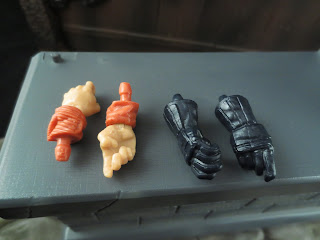 * To give Poe the option of wearing gloves if he needs to, Hasbro included an extra set of hands. They swap out at the forearm and allow Poe to either have nice, toasty fingers or increased dexterity. I really love this feature and I wish more Star Wars Black figures used it. 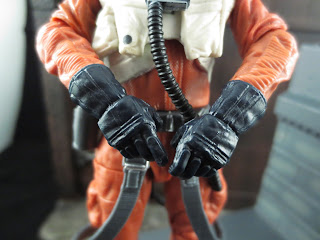 * And here is Poe wearing his gloves. They look pretty good, don't they? While they are missing the swivel/hinge joint that the regular wrists have they look nicely oversized, like actual gloves rather than hands painted black. I love the sculpt on these and they swap pretty easily. 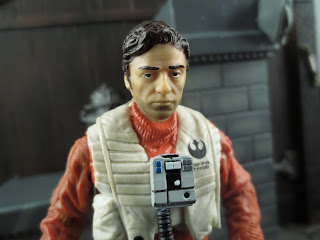 * Overall POe really is a pretty exceptional figure. Except for his face. Honestly, this Poe is one of the better ones I've seen but still the paint work on the eyes just doesn't look that great, Remeber that Family Guy clip where Vince Vaughn and Susan Sarandon starred in a movie called "People Who Look Like They Need Sleep?" Poe here looks like he needs sleep. When I first saw this figure, I thought he looked more like Benicio del Toro (who has now been cast in Episode VIII) than Oscar Isaac. 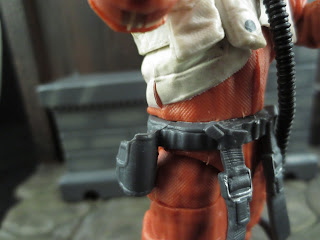 * This is kind of a weird problem that I didn't notice at first: If you look closely, you can see that the two halves of Poe's torso don't fit together perfectly. What's the deal there? It's not that noticeable nor is it really problematic, but it is a bit odd and once you see it, you can't ignore it. I haven't seen anything like this on a figure in a long time. 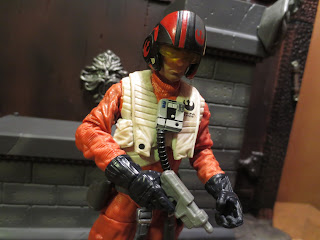 Let me go ahead and address that the paintwork on the headsculpt is not at all good. Honestly, it caused me to pass this guy up quite a few times. That being said, Poe Dameron might be one of the best Black Series figures that has been released. He's excellent because with one figure you can really make every version of Poe in this particular costume. With or without a helmet? Check! With or without gloves? Double check! I wish Hasbro would give more figures the options they need. Some figures don't need much, but some figures need more options. I'm really glad that Hasbro really went all out with Poe as he is truly a Great figure. Now I just wish they would give us a more definitive Rey figure to capture her other looks from the film as well. Other than Finn not coming with a lightsaber they've done a pretty good job with him, so it's time to start working on Rey.

I have reviewed one other Poe Dameron Figure: The Target Exclusive: Poe Dameron and First Order Riot Control Stormtrooper. I've reviewed plenty of other Star Wars: The Black Series figures, including: