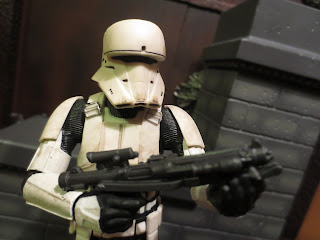 Today on the Road to Rogue One I'm checking out another figure from Phase III of Hasbro's Star Wars: The Black Series: The Imperial Hovertank Pilot. This guy isn't your average Black Series figure, though; he's a Toys 'R Us exclusive that was just released last Friday. On my Force Friday excursion to my nearest Toys 'R Us this was the only new Black Series figure they had. That was kind of disappointing in and of itself, but at least I nabbed this guy up. I'm really getting pumped for Rogue One: A Star Wars Story and I cannot wait to see how all of these cool new Imperial troops come to life on the silver screen. Want to take a look at this exclusive figure? Then join me after the break... 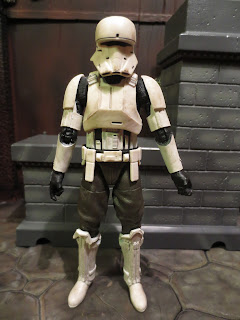 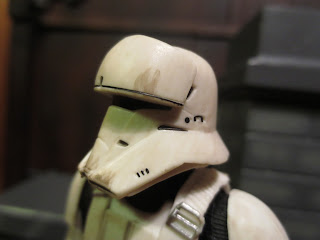 * I'm a huge fan of the various armored troops we see in the Star Wars Universe and I love how you can look at the armor and see so many similarities with an infinite number of varieties. This guy reminds me of a Phase II Clone Trooper from Revenge of the Sith, perhaps one of the tank drivers. I love the armored visor and the various grills and details on helmet. I'm also digging the weathering. This one looks really, really good. 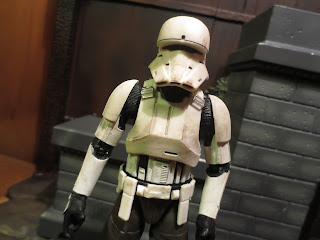 * Here's a look at the main torso. This guy just rocks, right? I love the armor on his torso. He's actually not wearing any armor on his legs, but that certainly must make piloting a Hovertank much easier. If he needs to peak out of the top or man a turret, the armored upper torso must surely come in handy, though. 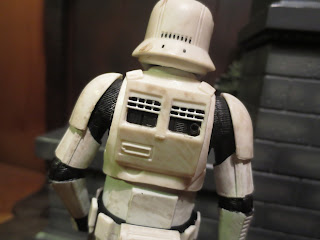 * I'm really looking forward to the Rogue One visual dictionary to find out what this cool device is on the back of the Hovertank Pilot's back. It's much more sophisticated than what we see on the back of most Imperial Troopers, so I'm curious if it's an advanced life support system or something that helps to sustain the Hovertank Pilots during longer campaigns. It's awesome looking, though, and has some more great paint applications to give the once white armor a weathered, worn look. 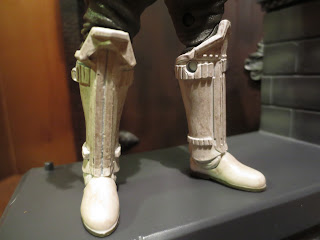 * The Hovertank Pilot is wearing some pretty slick boots. I love the details on them (the knee pads are also asymmetrical, just like a standard Stormtrooper's footwear) and the paint weathering continues down here. Hasbro really has done an amazing job with the paintwork here. It's a huge improvement over many other figures in the line. 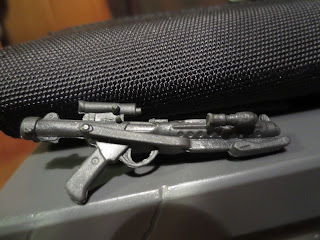 * The Hovertank Pilot comes equipped a little bit lightly, but I'm never one to turn down a BlasTech E-11. What's cool is that not only is this a new sculpt but it features some sort of sensor or target designator on the barrel. Lots of the Rogue One figures have these designators, so I'm wondering if this is a feature we'll see on the weapons in Rogue One. 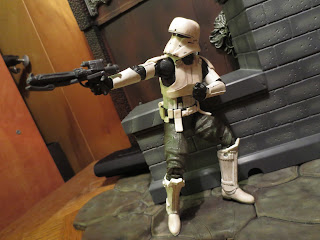 * You know, usually I talk about articulation first but this guy is so darn cool looking that I kind of focused on that aspect of the toy. Just know that this guy is as well articulated as any other Black Series figure. He's sturdy and quite fun to play with. I love sitting around and putting this guy in cool battle poses and I'm pretty sure you'll dig him, too. 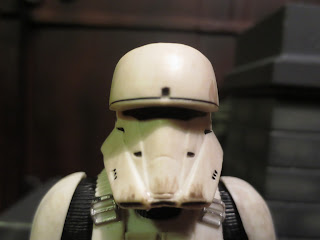 * If I have a complaint about this figure, it's really just that I would have liked to have seen his armored visor have the ability to rotate up and down. That seems like it might have been a cool feature. 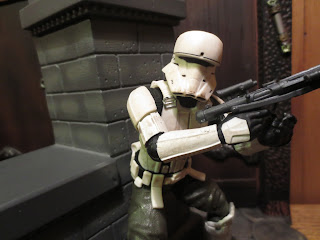 This was the first figure I picked up on Force Friday this year and I'm sure glad I snagged him. He's an incredibly impressive figure with some great paint applications. Maybe these guys will have big roles in Rogue One or maybe they'll be like the First Order Snowtroopers and essentially get cut from the film. Whatever the case, a cool toy is a cool toy and the Hovertank Pilot is a cool toy. He's exclusive to Toys 'R Us so you'll have to scout around their to find him. He's a Great and a 1/2 figure, though, and well worth picking up.

Interested in more Star Wars: The Black Series action figures? Then check out these other reviews: