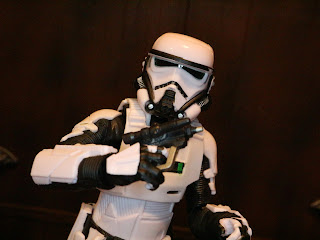 The first time I saw Solo I immediately pointed out the Patrol Trooper in the film and leaned over to my wife to tell her "I hope Hasbro makes that guy." Guess what? They did! Now, I cannot began to reason why Hasbro didn't release the Patrol Trooper with his C-PH patrol speeder bike, but they didn't. That would have been like getting a Scout Trooper without a speeder bike. Still, at least we got the troop and he makes for another nice addition to the ever growing Imperial legions that Hasbro has been cranking out. This guy is part of the newest series of Black Series figures, so he comes shipped along with some really amazing figures. Is he up to par? Let's check him out after the break... 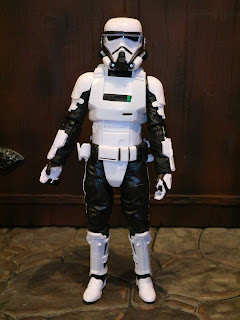 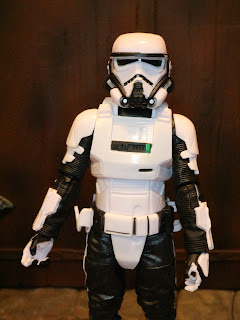 * The Patrol Trooper has a cool suit that certainly hits all of the classic Stormtrooper beats while also borrowing from the Scout Troopers, who have always had one of my favorite designs. The Patrol Troopers seem to be the Empire's version of a patrol officer. They have some armor but they're really designed to get around quickly and travel light in urban environments. The black bodysuit is much more prominently on display here than on most armored troops but there definitely seems to be lots of equipment built into the suit. 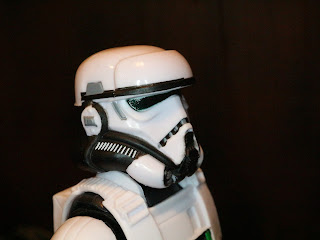 * The helmet has the larger forehead, like many of the troopers from the newer films, but also uses more black and grey than your standard Stormtrooper helmet. It's an interesting look that reminds me just a little bit more of a Clone Trooper helmet. 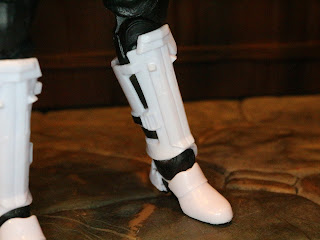 * The greaves are cool. They're sculpted to look like pieces of armor over the trooper's legs and they seem nice and protective while still being light and mobile. 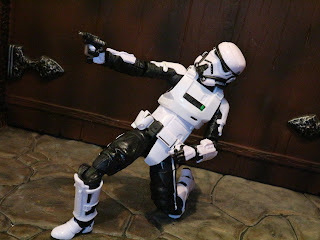 * Overall, the Patrol Trooper is another well articulated and highly durable Black Series figure. Hasbro continues to do a great job with this line and has made for some very fun, very poseable toys. 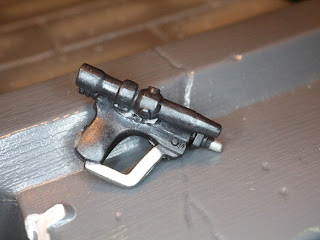 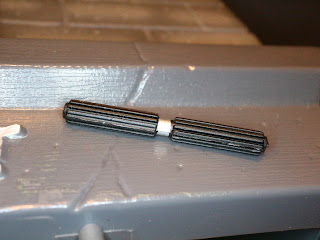 * The Patrol Trooper also comes with what looks like a stun baton of some kind. It kind of looks like the weapon that the Luke Skywalker  in Imperial Guard Disguise figure from Shadows of the Empire wielded, only miniaturized. 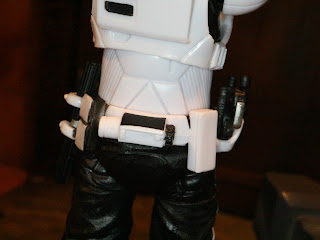 * Both weapons fit into holsters on the Patrol Troopers belt (the taser on his left and the pistol on his right) and look pretty cool when in place. The trooper's utility belt has lots of pouches and useful looking stuff on it, which I just really dig. 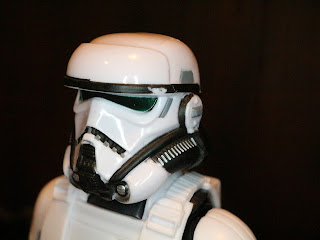 * The helmet looks great overall but mine has too paint mishaps. First, the black line across the front of the helmet isn't even. Second, there is a missing chip of paint on the left side. Oops! 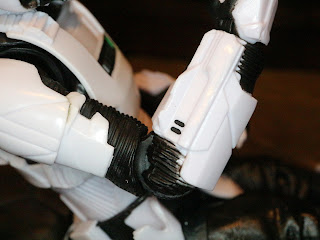 * The elbows on this guy are kind of tough to manipulate. They are really, really tight when they're posed straight and it can be really difficult to get them back into a "bent" position. I'm not sure what happened, but this seems like a design/ engineering flaw rather than a quality control issue. 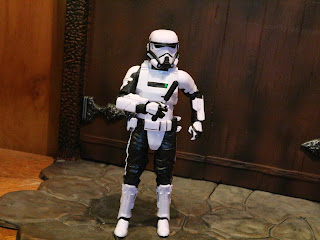 I do like the Patrol Trooper quite a bit, although I wish he had come packed with his distinctive speeder bike. He's not bad on his own, though, and the fact that his utility belt actually functions with removable weapons is just too cool. I do wish we would see more Stormtrooper variants that look even more distinctive from what we've seen before but I think the Imperial Patrol Trooper is a step closer to where we need to be. He's a solid figure of a cool design from a criminally underrated Star Wars film. That's a Great in my book, right?

This is the first toy of the Imperial Patrol Trooper I've reviewed. For more Star Wars: The Black Series reviewed check out the following: