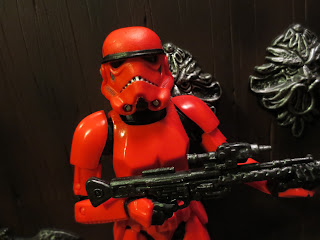 Today is December 16th, 2015, so guess what everyone in the US will be doing tomorrow? Probably going to one of the early screenings of Star Wars: The Force Awakens, that's what! To help get you through one more day I'm giving you a review of not one, not two, not three, but four new figures in the Star Wars Black Series! Today I'm looking at the new Entertainment Earth exclusive boxed set that contains four Imperial figures: Sandtrooper Sergeant, Crimson Stormtrooper, Lieutenant Oxixo, and R2-Q5. While the Amazon exclusive 4 pack featured some troopers we needed to fill out our rosters, this one has some real oddballs (including a guy based on some poster artwork). If you're looking for four of the most odd and random Imperial troops you can find, you've come to the right place. Since this set features no new sculpting at all (everything in here is a repaint of figures I've already reviewed) I'm doing what I did on the last 4 pack and simply pointing out the differences between these figures and their predecessors and the strengths and weaknesses. If you want full coverage of the base figures here, check out my reviews of the Sandtrooper, Stormtrooper, Tie Pilot, and R2-D2. If you're ready to take a look at these new figures, though, then join me after the break... 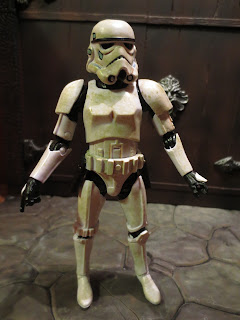 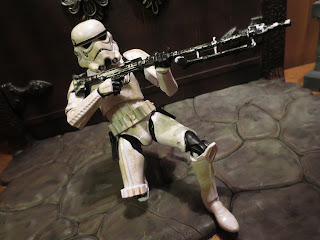 * I've always loved the awesome articulation on the Sandtrooper base body but there has always been one little problem: The double hinged elbow and knee joints have always been very rubbery. That's been fixed on this release and it's a wonderful thing. This guy is solid, study, and tons of fun to play with. You'll have tons of fun putting this guy in cool poses while contemplating why Hasbro removed the double hinge joints on the First Order troopers. 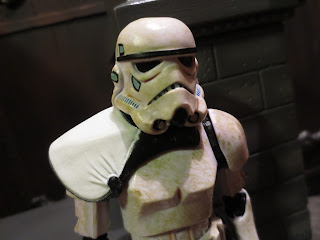 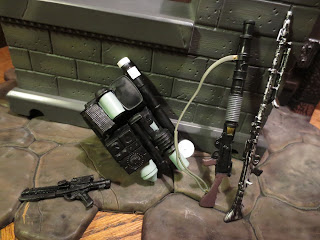 * No only is the Sandtrooper loaded down with the same large complement of weapons as his companion Sandtroopers but his are actually much sturdier than theirs. These guns have a better plastic quality than the more rubbery weapons of the Phase 1 and Phase 2 Sandtrooper figures. The only thing I'm disappointed about is that now that we've had all three Sandtroopers released, it now seems unlikely we'll see a figure including the RT-97C heavy blaster or the Mark IV Sentry Droid as accessories.Considering this set has a premium mark-up, that probably should have happened. 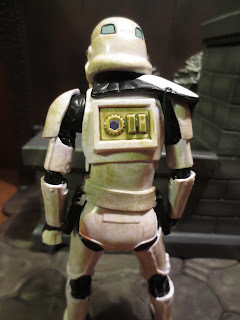 * The paint scheme on the Sandtrooper Sergeant is awesome. He looks as worn and weathered as the other Sandtroopers in this series which is a good thing. 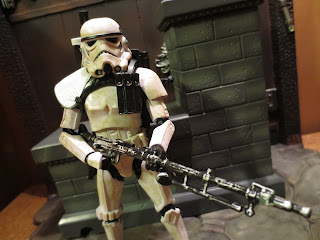 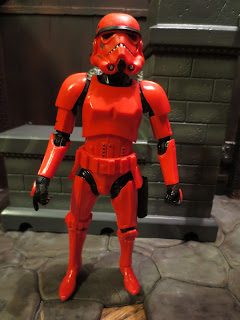 * If there's a highlight in this set other than completing the Sandtrooper trio, it's the bright red color of the Crimson Stromtrooper! This guy looks like a Christmas decoration and I love him for it. He comes from a 1995 image from Star Wars Galaxy magazine (definitely my favorite reading material back in 1995 as I always preferred it over Star Wars Insider) where two of these guys were helping out Lumiya from the old Marvel Star Wars comics series. This is a really random and strange figure but the bright paint really sells it, although I wish it were a more metallic red. 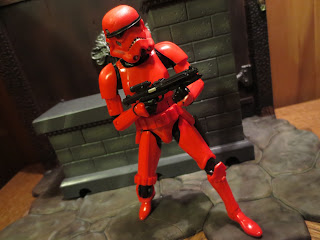 * I really liked the articulation on the basic Stormtrooper and I love this guy's even more because his joints are much more solid. Some of the figures in this line have suffered from rubbery joints on their double hinged knees and elbows, but not this guy! Like on the Stromtrooper sculpt in the Amazon 4-pack set, the joints are much sturdier. He's excellent! This guy is pure hand candy, plain and simple. 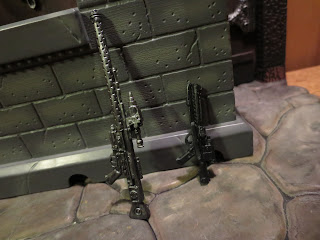 * The Crimson Stromtrooper comes with the same two weapons that the previous Stromtroopr figures have come with: A BlasTech E-11 blaster rifle and the BlasTech DLT-20A, (the longer rifle). They're but nice looking weapons and I lovr the weathered look of the DLT-20A as it has a great silver dry-brush effect but where's the paint apps for the E-11? It has one silver paint app (not shown here) but no dry-brushing. I guess it has been kept in better shape by its owner. 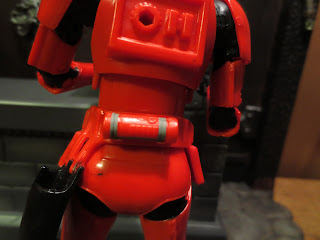 * Take note that there are some unsightly black scuff marks on the back of the Crimson Stormtrooper's armor. I'm not sure what caused these (perhaps some errant paint applications on the nearby joints or holster?) but they're there. 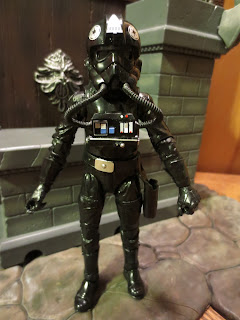 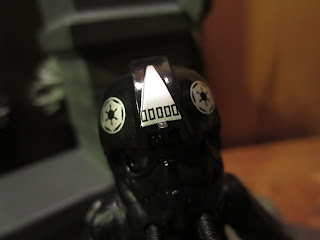 * I'll be honest and admit that I didn't know who Lt. Oxixo was when this set was first announced. Turns out he's a Tie Pilot who has a silver crest painted on his helmet with "OXIXO" on it. He was made into an action figure a few years back, too. So he's a TIE Pilot who's sole distinctive is that his helmet says OXIXO. Too bad Hasbro completely failed and this guy's helmet says "OOOOO." That's a major fail right there. I mean, cripes. You had one job to turn the basic figure into Lt. Oxixo, Hasbro, and you failed it. 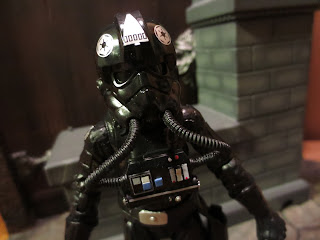 * On the positive side, the chest panel is a bit more detailed. It features more paint apps than the standard TIE Pilot and looks even more movie accurate. 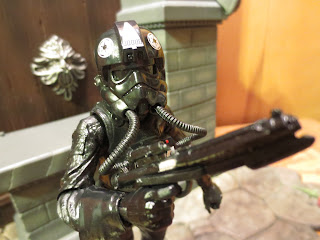 * Lt. Oxixo comes with the standard E-11 Blaster rifle. It's no different than other version of that rifle out there and gives him something to store in his holster or keep in his right hand. 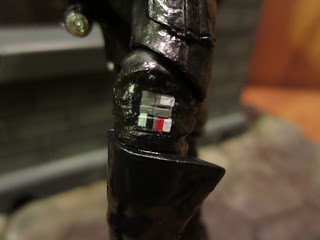 * Another difference between this figure and the basic Tie Pilot is that the communications pad is much more accurate. It has far more paint colors on the buttons on the row nearest to the gloves. Cool little extra detail! 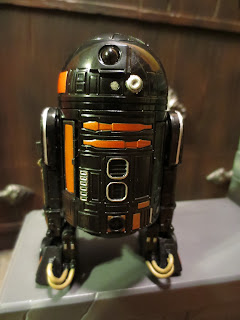 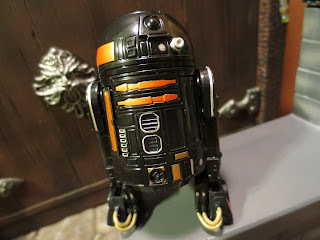 * Who exactly is R2-Q5? He's an R2 unit who appeared aboard the second Death Star in Return of the Jedi. He's also a simple repaint of R2-D2. I've already reviewed that figure, so I'm really just commenting on the paint job here. I was working with some bad lighting for this set but I want to point out that his highlights are not orange; they're actually bronze. It's a slick look and it's quite well done. 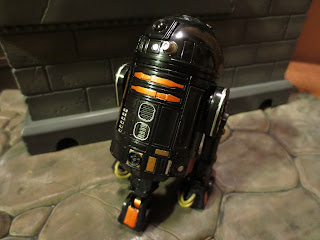 * Since R2-Q5 is just a simple repaint of R2-D2, that does mean that he kept the action features of that original series 1 figure. The first feature he has is a retractable third leg. The third leg descends when R2's dome is spun counter clockwise and retracts when spun in the opposite direction. It works just fine although I'm not sure why a simple sliding joint wouldn't have worked (since it worked on the POTF2 version in 1995). 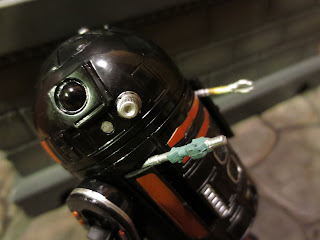 * The second "action feature" R2-Q5 possesses are the opening ports and fold out gadgets of the Phase 1 R2-D2. Both compartments open easily and the gadget arms are on simple hinge joints. I'm glad Hasbro did keep these with this figure rather than leaving the interior components out as it does make the figure a bit more fun. 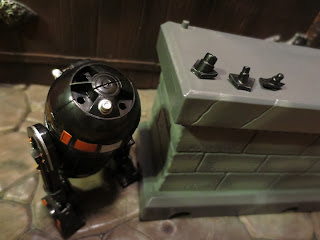 * Just a heads up: R2-Q5 has the same removable plugs on his dome that R2-D2 had, so I guess you can count them as accessories. If you don't have any use for them then just leave them on. If you're interested, though, you could always put some of R2-D2's spare accessories in there to spice R2-Q5 up a bit. The panels on the sides of his legs are also removable, just like on R2-D2. 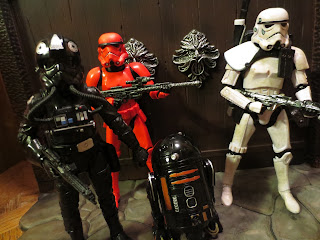 I'll be honest: There are a few things I like about this set (finishing the Sandtrooper trio and the Crimson Stormtrooper) but overall this set is kind of boring and not as well executed as it could have been. Why couldn't R2-Q5 have come with R2-D2's accessories? Why didn't Hasbro get Lt. Oxixo's helmet right, as it's literally the one thing that separates him from everyone else? Why is this set $100 instead of the $80 that the Amazon 4-pack was? Yeah, this set actually ends up costing $25 a figure, five bucks more than a Black Series figure on it's own. So far no exclusives have cost any more money than an average figure unless they came with extras like the Starkiller Base Kylo Ren or the SDCC exclusives, so why is Entertainment Earth charging more than everyone else for simple repaints? Seems kind of odd to me. At that price and factoring in some of the odd choice, this set gets an Eh and a 1/2 from me. If you're a completest or really love Imperial troops this is worth getting. Otherwise, just steer clear: The artificial up-charge and Lt. Ooooo definitely will make you feel like you're not getting your credit's worth.


I've reviewed plenty of other figures in the 6 inch Star Wars Black Series, including: