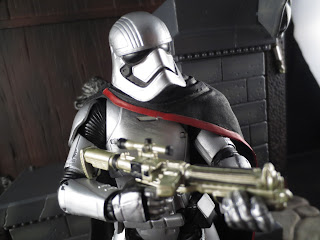 I can report that it is indeed true: I have found Captain Phasma! I know that everyone's talking about #Where'sRey but I ran across Rey many times. Captain Phasma though? I finally tracked her down as the repack in a case of 2016's Series 1 figures. I've been looking for her since Force Friday back on September 4th, 2015! It took me over 4 months to find this figure! I knew it was just a waiting game, though, because Captain Phasma was definitely one of the three most heavily merchandised characters in The Force Awakens alongside Kylo Ren and BB-8. While she didn't have a huge role in the movie (although she was still incredibly cool) she did have the look and, sometimes, that's all you need. Apparently named Phasma in tribute to the Don Coscarelli film Phantasm which features these weird, flying chrome orbs and creepy mortician named The Tall Man (played by the late Angus Scrimm, who just passed away on January 16th), Phasma is an incredibly tall Captain of the First Order who wears unique chrome armor. Played by Gwendoline Christie, Phasma's a cool character with an important role who has some room to develop further in future media. Let's take a closer look at the shiny and sinister Captain Phasma, after the break... 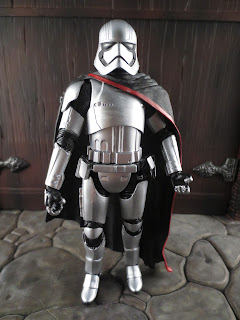 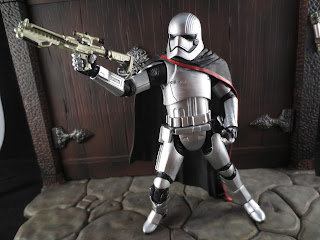 * Captain Phasma is built like the rest of the First Order Stormtrooper figures but just a bit larger. Hasbro has done a pretty nice job with most of the Black Series figures and Captain Phasma is another sturdy toy with useful articulation. While she (and the rest of the First Order troopers) is missing the double hinged elbows which the Clones and Imperials had, you'll still be able to get most poses you want from her. She does an excellent job of standing around looking menacing. 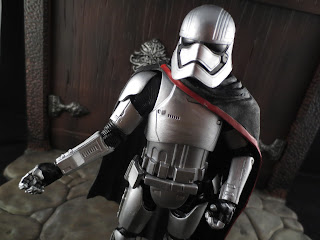 * Hasbro always does a stellar job with armored characters in the Black Series. I love how Phasma's armor takes the basic Stormtrooper armor but adds the chromium plating and cape to create something completely unique. All of the details are here and the mesh together perfectly. She's an incredibly intimidating figure, even in the 6 inch scale! 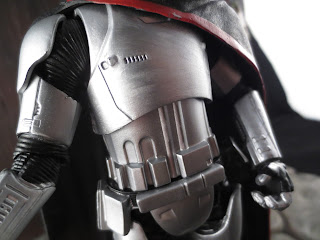 *I'm not a fan of vac-metal on most figures so I'm glad Hasbro didn't attempt that here. While she's not as shiny as her on screen counterpart, Captain Phasma's brushed chromium is represented very well with some nice dry-brushing techniques to give a richer level of detail. Did you know that Captain Phasma's armor is coated from chromium that was salvaged from a Naboo yacht that once belonged to Emperor Palpatine? Now you do! BTW, check out the Visual Dictionary for The Force Awakens for more awesome insights. It's a killer book. 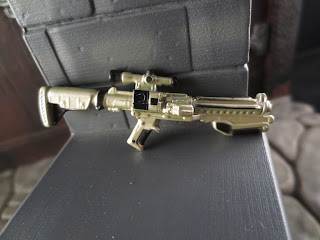 * Like her armor, Phasma's blaster rifle stands out too with a chrome finish. While at a glance it doesn't look too different from the F-11D blaster rifles the standard First Order Stormtroopers carry, the front stabling grip, the trigger, and the macroscope are quite different. The design actually reminds me a bit of the E-11s which the Imperials used. Phasma can hold it quite nicely, even in a two-handed grip. 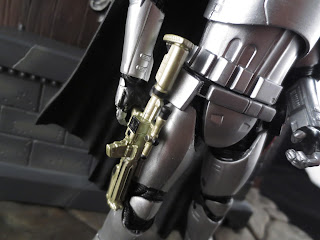 * I can't remember if Phasma actually stows her blaster on her right hip during the film or not but this figure allows for you to "holster" her blaster when she's doing stuff other than shooting Resistance members. This is a cool feature for the First Order troops and I'm glad that Phasma has it too. Even with the stock on her blaster, it can still rest on her hip without impeding her motion. BTW, there's a little thing that looks like a card reader or something on her left calf. Anyone know what that is for? 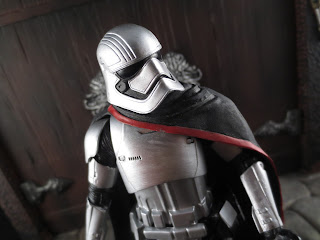 *I'm really not sure why Hasbro decided to start making the heads on the Black Series not so easily removable but Phasma's definitely a figure where this is truly a loss. I'd love to be able to easily remove the cape and swap things around as desired but it is really tough to get the head off. I managed to get it off once with some real effort and I don't think I'll be doing that again. I loved how easily the earlier figures' heads came off. 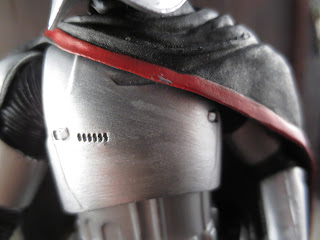 * I have to say that this little scratch on the edge of Phasma's cape is driving me nuts. I noticed it in the package in the store but considering it took me four months to snag a Phasma, I wasn't letting this stop me. It's not the end of the world but the fact that it's prominent and a bit sloppy does irk me a bit. Just a bit. 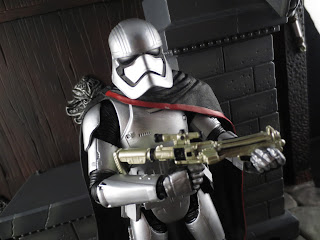 Captain Phasma turned out really well. I'm sure she's a character that will continue to receive improved versions overtime  but this is certainly not a bad first effort. I would have loved the ability to remove the head so that the cape could be taken on and off but Hasbro seems to be moving away from that feature in this line. Overall Phasma's a Great figure in the line and is definitely one of the highlights of the 2015 Black Series line. Since she's being repacked again in the newest cases of figures, hopefully more collectors and fans will get a chance to pick her up.


The only other Captain Phasma figure I've reviewed on here is the Funko POP! exclusive Captain Phasma [Chrome] #91 from the Smuggler's Box crate subscription.

I've reviewed plenty of other Black Series figures, though, including: