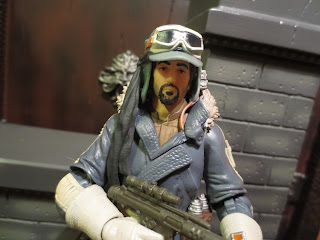 Welcome to the Road to Rogue One! While Hokey Halloween Horror is just getting started at Action Figure Barbecue, I'm also eagerly counting down the days to the release of Rogue One: A Star Wars Story! I attended a midnight event at Toys 'R Us on Force Friday/ Rogue Friday and ended up with a few new action figures to review. Today I'm looking at Captain Cassian Andor in his Eadu outfit. Cassian is a Rebel intelligence officer and part of the main cast of Rogue One. Looking at him, most fans will probably automatically recognize that his outfit looks pretty similar to Han Solo's outfit on Hoth. That actually just adds to the appeal of this figure in my book, as Rogue One seems to really approach the look and feel of the Original Trilogy era. Captain Andor is part of Hasbro's 6 inch Star Wars: The Black Series Phase III and is in the same style of packaging as last year's The Force Awakens figures. Ready for a closer look at a new Star Wars figure? Then join me after the break... 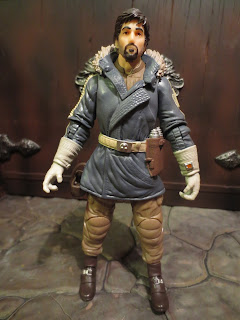 Accessories: 2 blasters and a hat. 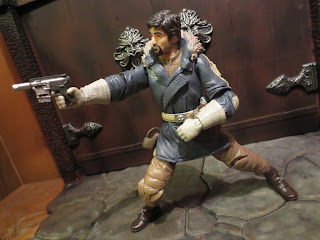 * I really like the articulation on the Black Series figures and, even with a bulky parka, Cassian can still take a variety of poses. Hasbro just has a nice articulation scheme on these figures and the swivel/hinge ankles and wrists, along with the double hinge knees and balljointed waist, just make their offerings really fun to play with. He's sturdy and a darn fine toy who looks cool blasting his way in and out of trouble. 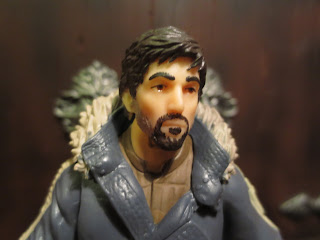 * Here's Captain Cassian Andor! Does he look exactly like actor Diego Luna as the character? I don't think so. It's still not a bad looking figure, though. At first glance, I kind of thought the figure resembled horror author Joe Hill. The beard and hair are pretty well done, though. 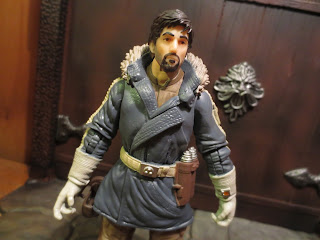 * I love this outfit. Again, it does kind of resemble the Rebel outfits worn on Hoth, but doesn't it make sense then that Rebels in the time just prior to A New Hope would be wearing similar gear on other hostile planets? My guess is Eadu is a pretty hostile planet and this equipment isn't just a fashion choice. 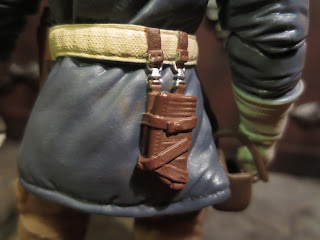 * I'm not sure what this is hanging off of Captain Andor's belt but it looks cool. It almost looks like a journal of some kind. I'm probably wildly wrong, though. of course, there are always some guesses you just have to make when reviewing action figures from a film that won't be out for over two months. It's a nice detail, though. 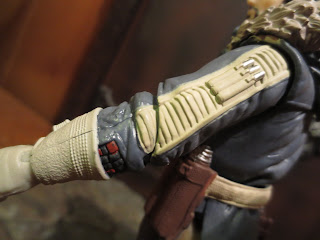 * I really like the code cylinders in the shoulder pouches and the small device peaking out from under the glove. The padding on the arms looks great, too. I'm really digging the look of the Rogue One costumes so far. 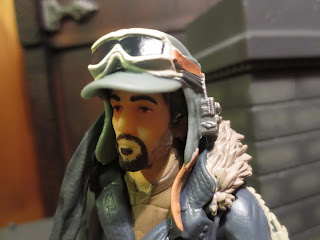 * Check out Cassian's hat! It's got an attached scarf, goggles, and even a communicator. I love the look of this, especially since it looks pretty solid on the figure. Sometimes accessories like this can look oversized but here it works really well. Plus, something like this would make sense being just a tad but bulkier. 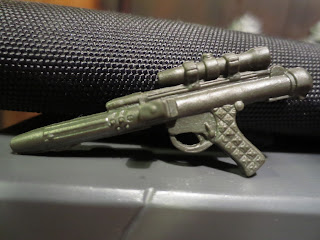 * Cassian's primary weapon here is a DH-17 blaster pistol. It's the first time we've seen this weapon in the Black Series, I believe, and it looks pretty good. Black and silver would have been a nice paintjob, but maybe this look matches what we'll see in the film? There's a cool little device on the other side of the pistol (not shown here) that seems to be a laser designator of some sort. I wonder if it ties in with something we'll see in the movie? 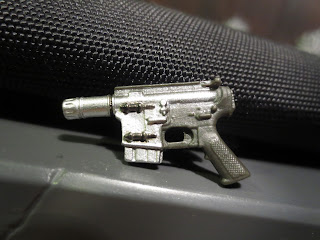 * Cassian's blaster appears to be a unique design. I actually think the main body looks like the receiver from an M-16 styled assault rifle. Of course, it's a pistol so it's a bit smaller. It's also given a few paint applications to improve it's appearance. I really like this one and it seems to be Cassian's personal sidearm of choice. 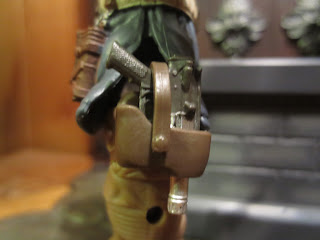 * Cassian has a functional holster on his right hip that holds his blaster. I'm really glad that the Black Series continues to use this feature. It's really easy to get this blaster in and out of the holster and to snap it closed. 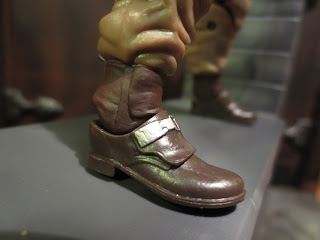 * This seems like a pretty minor nitpick, but the top and bottom of Andor's boots are actually different shades of brown. I don't think this is a style choice but the fact that the lower leg piece and the foot were molded in different colors of plastic. 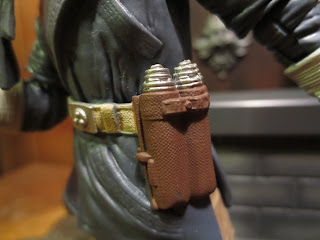 * These appear to be some major explosives hanging in a pouch on Cassian's belt. I really wish that they were removable, though. They're not that small (they seem larger than lightsabers) and their being removable would make a really cool feature for the figure. 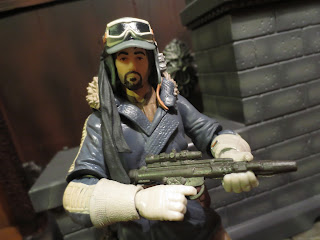 I have to admit that I really like this figure. Yeah, he's not perfect, but he just has so much interesting stuff going on. I kind of liked the book Star Wars Battlefront: Twilight Company and this is the kind of outfit I imagine those guys wearing into combat in hostile environments on extremely harsh planets. The weapons are cool, the removable hat looks great, and the little details are nice. While this doesn't seem to be the default look for Cassian Andor in Rogue One, it's still a very cool outfit. I'm giving this guy a Great and a 1/2 rating.

I haven't reviewed any other figures of Captain Cassian Andor, but I have reviewed plenty of other Black Series figures, including: