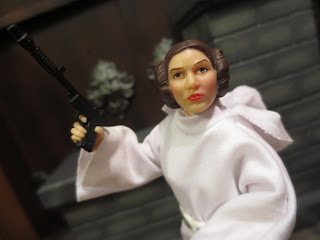 I can still tell you where I was in 1995 when I found the Princess Leia figure from Kenner's POTF2 line: I was out with my dad at a K-Mart outside of Memphis, TN. Princess Leia didn't even appear on the earliest card backs in that line and so her appearance was a really big surprise. Of course, being one of the main three heroes, Princess Leia was absolutely necessary to play with Star Wars toys. I remember how excited I was to find her, despite her not having the greatest headsculpt of all time (Remember, the POTF2 line, along with Micro Machines, was largely my introduction into the world of Star Wars, so I cherish those insanely muscular but well made action figures). It's been a little over three years since Hasbro released their first Black Series 6-inch scale figure and while we've had two other Leia releases, this is the first time we've received the classic Leia. I love the Black Series and I'm typically pretty pleased with the figures, but I have to admit that I'm definitely pretty critical when it comes to the original cast in their A New Hope costumes. Today I'm definitely going to be dissecting this release because while I've been eagerly anticipating this, Leia in her white outfit is a figure from Hasbro I expect perfection with. Let's see if Hasbro lives up to those outrageous expectations after the break... 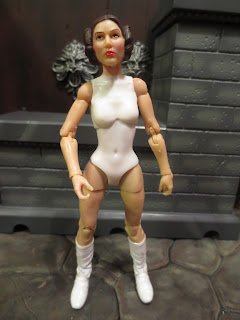 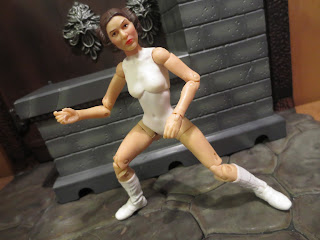 * Like other figures featuring actual fabric clothing in the Black Series, Leia does feature enhanced articulation which includes double hinged knees and elbows. Despite being quite small (and appropriately short), Leia feels sturdy and well made. She's actually very fun to pose and the fabric robe doesn't hinder her articulation much at all. 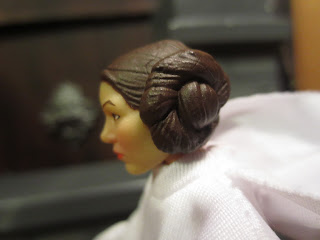 * Is there any hairstyle more iconic than Carrie Fisher's space buns? I think not and, if you think otherwise, I'll meet you behind the local comic shop in half an hour to settle our differences. Hasbro did a great job on these. The sculpt looks good and the color seems just right. 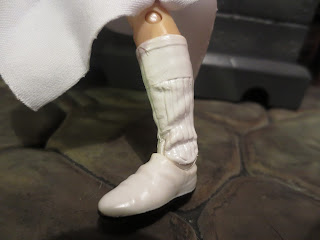 * Leia's boots look great, too. Do you ever even see Leia's boots in the movie? Yup, when she's lying down in her cell on the Death Star! The sculpt and texture on these looks great. 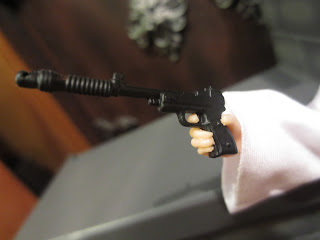 * Leia includes her Defender sporting blaster, and for some reason this really excited me! Princess Leia action figures have always sported a unique blaster pistol modeled after the one she uses at the beginning of A New Hope, even back in the largely inaccurate Kenner eras (vintage and POTF2). This looks dead on for the film prop. 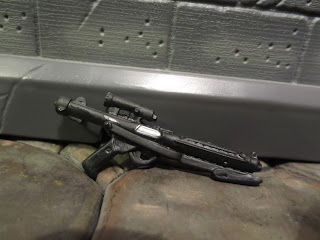 * Leia comes with the E-11 blaster that she uses when escaping the Death Star. We've seen this mold so many times now, but the E-11s are pretty much everywhere during the Rebellion era, so this makes sense, right? It's still a great sculpt and even has a silver paint app on the side. Considering this and her Defender blaster, I think this includes everything Leia uses in the film except for one of the metal rods down in the trash compactor. 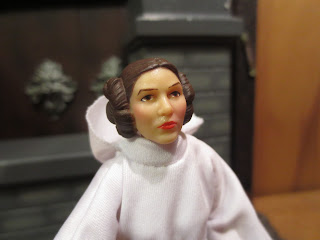 * Anyone who has been following this line probably knows that the first time Hasbro showed this figure the headsculpt was atrocious. It looks a little better here, although not as improved as Hasbro discussed that it was going to be. From a bit of a distance and from many angles, it actually looks quite good. There's no mistaking who this is. 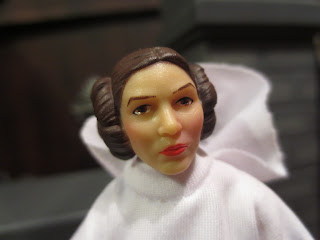 * But look at the face from another angle and it looks puffy and awkward. I've seen some beautiful repaints of this headsculpt, so I'm not sure if the problem is the headsculpt or the paintjob. The Black Series has sometimes delivered some slightly caricatured portraits, but this one doesn't seem to go in that direction. It just looks bizarre. 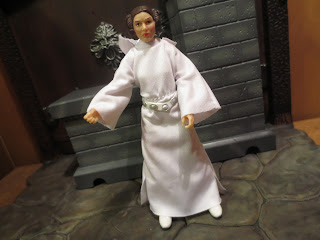 * Despite what your memory or this poster might lead you to believe, Leia's robe wasn't really that form fitting. It did drape and hang a bit in certain places to truly give it the feel of a robe rather than a dress. In that way, the choice to give Leia an actual fabric robe makes sense. Still, there's something about this robe that makes it look "oversized" versus 'billowy." Tighter sleeves (maybe even an inner elastic cuff) really may have helped to cut down on the oversized look. The recent ANH Luke had the same problems, too. 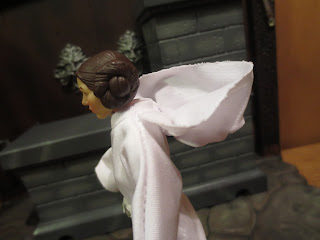 * The other problem with this figure is the hood. The hood hangs out from the back and doesn't rest naturally at all down the figure's back. I think I would have just rather had either no hood or a hood permanently affixed in a resting position than what we got. 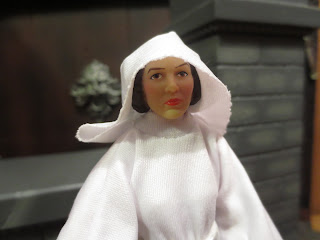 * And here's a picture of the hood up. Again, there's just something off about the way it drapes over the head. I really think an alternate head with a shaped fabric hood attached would have been a better choice. Kind of like Darth Maul, but actually a stiffer fabric piece pre-shaped. Or a thin wire in the hem to shape the hood. Either would have been preferable. 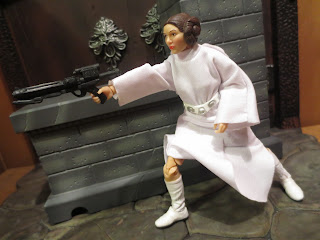 This is definitely one of the Black Series figures I'm most conflicted with: On one hand, I love the articulation, the use of fabric, and the accessories. On the other hand, I'm not sold on the headsculpt nor fit of the robe. This classic version of Leia is a figure I've been looking forward to since the line began, but it could definitely be better. It's Good, but this is a figure that at least deserved greatness. If you collect this line, I'm not sure how you could pass her up, but I don't think anyone's going to be sold on the line just because of her. Maybe Hasbro will give her another attempt at some point in the figure, but not before we get General Leia, Leia in her Hoth outfit, both Bespin Outfits, her Yavin ceremony dress, her Combat Poncho, and her Ewok dress. Oh, and that outfit she wears on the medical frigate at the end of Empire. Oh, and the outfit she wears in the Marvel miniseries. Honestly, that might be one of my favorite Leia outfits ever. Hasbro needs to catch up on Leia variants is what I'm saying.