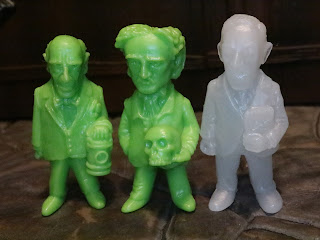 Over the past year or so the Mythos line has gone beyond just offering figures based on the works of H.P. Lovecraft and is now offering minifigures based on other writers of Weird Fiction who both inspired Lovecraft and who were inspired by him. While the line has only had two series released so far they have released multiple expansion sets of one or two figures molded in resin rather than the PVC of the regular figures. These drops have been extremely difficult to get a hold so it's quite welcome that HH Toys is offering a set of the released figures from the expansion packs molded in PVC. The set is filled with weird creatures from Lovecraft, Algernon Blackwood, Edgar Allan Poe, William Hope Hodgson, Crispin Burnham, E.P. Berglund, and Clark Ashton Smith! It's also available in green, blue, red, yellow, and glow in the dark. As you can see, I received a set in green for Christmas 2020. Let's delve into toe realm of the weird as we check out the Mythos Expansion Master Set after the break... 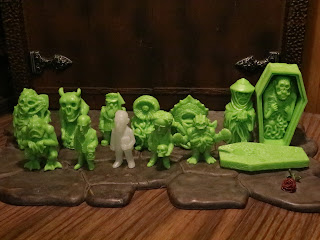 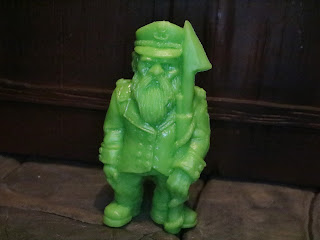 Part of Expansion 1, the Innsmouth Expansion Pack, from July 2019, Obed Marsh is the founder of the Esoteric Order of Dagon and an influential force in Innsmouth. Marsh looks like a stern sea captain and is decked out in his seafaring clothes, clutching a harpoon. The work on his weathered face and and the small details on his coat are all excellent. 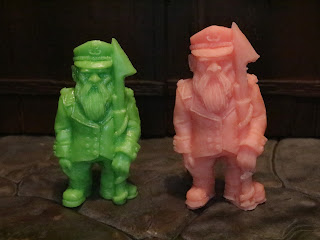 * I never reviewed the Innsmouth Expansion Pack when I picked up one of the re-releases but here's a look at Obed Marsh in this set compared with the resin release. The resin figure is slightly larger and, of course, the material is stiffer. the edges of certain parts are much "rougher" too, with a bit of flash on them. This one is nice and smooth like you usually expect M.U.S.C.L.E./ M.I.M.P. styled figures to be. 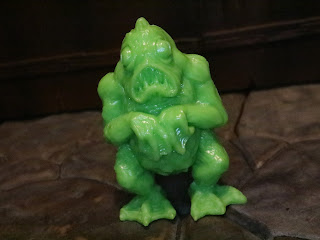 * The second figure from the Innsmouth Expansion pack, the Deep Ones are aquatic beings who worship Dagon and Hydra and keep the city of Innsmouth supplied with plenty of fish. The Deep One is a fantastic little fish guy with lots of fins and flippers and some long, nasty teeth. 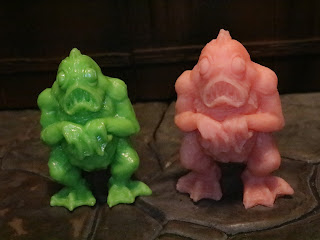 * Here's a comparison between the PVC Deep One and the resin Deep One from one of the previous releases. Like Obed Marsh, the PVC minifigure is smaller but cleaner than it's resin counterpart. If anyone is an expert on why this is please let me know! I'd love to learn more about this process! 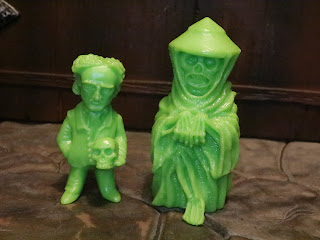 * I did review the resin release of these figures in Expansion #2 last year when they were released and I liked them then but I like them even more in PVC. These are some incredible looking figures of Poe and the creepy stranger from The Mask of the Red Death and I'm thrilled that the line has expanded beyond just Lovecraft to embrace Weird Fiction overall 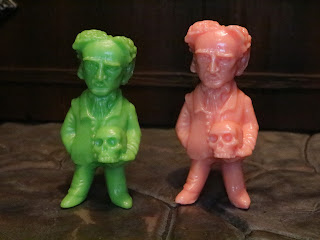 * Here's another comparison between the PVC Edgar Allan Poe and the resin Poe. 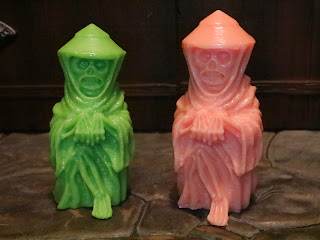 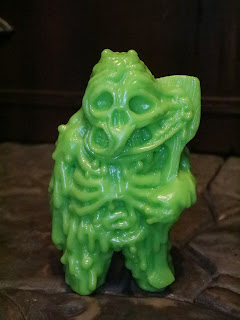 * The Fungal Fella was released as Expansion pack #3 and he's based on William Hope Hodgson's "The Voice in the Night" from 1907. The Fungal Fella is a stranger at sea who has been transformed by a fungus of sorts. In the story he's aboard a lifeboat and thus that's why he's carrying an oar. This guy is one of the standout figures in the set and is truly gruesome! I love the visible ribs, the hollow, haunted eyes, and the skeletal grimace. 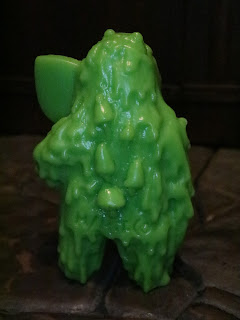 * On the back of the Fungal Fella you can see the various mushrooms and other fungi that have taken root on him. The story "The Voice in the Darkness" has been adapted multiple times, though I've never read it or seen any of the film adaptations. I'm going to have to fix that! It does seem to have inspired the plot of The Last of Us, though, which is pretty cool. 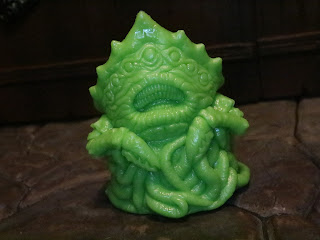 * Janai'ngo is a creature from Weird Fiction tales that I can't find much about. Apparently created by authors Crispin Burnham and E.P. Berglund, the packaging of Expansion pack #5, which he came from, attributes him to the story "The Thing in the Library" which I haven't been able to track down. Dwelling in the Bay of Rhiklu and a servant of Cthulhu, Janai'ngo is a monstrosity for sure! This guy is really impressive! 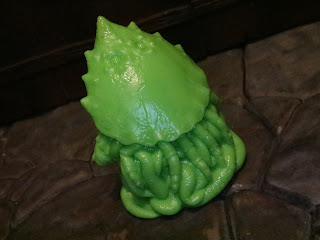 * Here's a shot of the back of Janai'ngo so you can admire all of his tentacles and glorious armored shell! 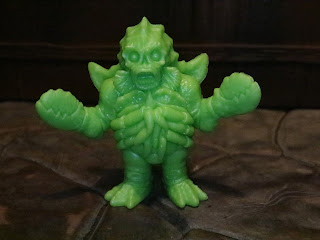 * From Clark Ashton Smith's "The Master of Crabs" Expansion Pack #5 also included Basatan, a sea god of Zothique and the Master of Crabs. He's a creepy, clawed crab guy with excellent texture on his body. Seriously, he's a very sharp looking minifigure who fits in perfectly with the rest of the line. 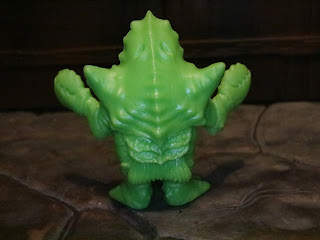 * The back also shows his armored shell and his weird tail. It kind of reminds me of the back of a crayfish. 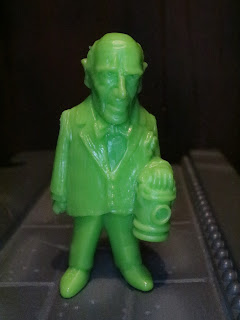 * Expansion pack #6 included Algernon Blackwood, another prominent author in the Weird Fiction genre. Blackwood inspired H.P. Lovecraft, Clark Ashton Smith, and even J.R.R. Tolkien to some extent and he's now honored with a minifigure in this series. He's depicted as a gaunt, elderly man holding a lantern. 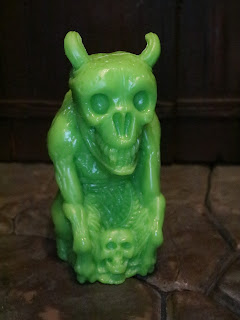 * Algernon Blackwood's "The Wendigo" is a terrifying story that has stuck with me for years. I read it in college and it always drifts into my mind when I'm out in the woods, particularly at night and in the cold. It's a creepy tale involving the Algonquin mythical creature and this figure does it justice. It's hideous! With an animal-like skull but an oddly human countenance, the Wendigo is perched over some shrubbery where the remains of some poor soul lay. 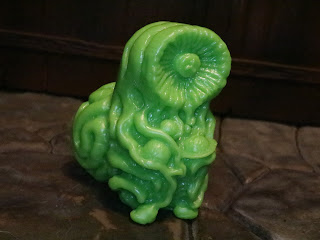 * Another Lovecraft creation, Azathoth appears in many tales and is one of the Outer Gods who appears differently to whomever witnesses him. From an oozing horror to a black hole in the Milky Way, Azathoth seems bound to no physical constants. The minifigure is an oozing, leach-like horror who appears to be holding some planets in his tentacles! 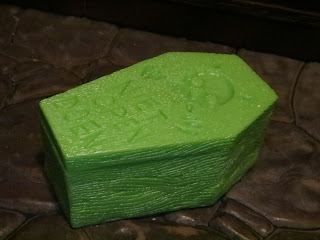 * We've already received the Hound in Series 1 of the line but not we get the Hound Ghoul residing in his coffin. The coffin is quite large and impressive with plenty of room to place most humanoid minifigures in it. 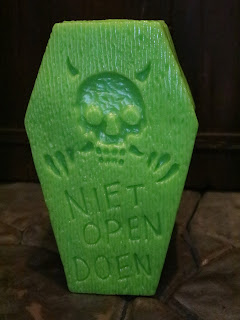 * The from of the coffin has a pretty creepy carving on it and the words "Niet Open Doen" which I think roughly translates to "Do not open." 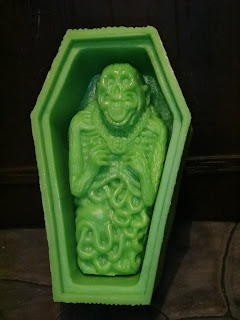 * Inside the coffin is the hideous Hound Ghoul! His lower body is a pile of guts, his face is terrifying, and he's wearing the jade amulet that Abdul Alhazred mentions in the Necronomicon. He's a fantastic sculpt! 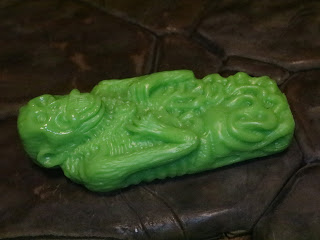 * He's also removable. He can kind of stand up but since he's a pile of squishy, rotted parts, he's more designed for just lying about. 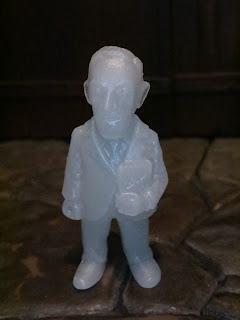 * Lovecraft isn't mentioned as being a part of this set, but mine came with him molded in Glow-in-the-Dark plastic. Maybe this was just a little bonus inclusion? He was part of series 1 but it's always cool to have Lovecraft hanging around on your shelf. 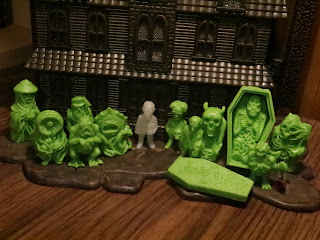 This is another incredible set and I love the diversity of the offerings we're getting now. This set is packed with some excellent sculpts and considering you're getting 13-14 pieces in the set it's not a bad value per figure for the price. This is one of my favorite lines right now (definitely my favorite ongoing minifigure line) and I'm really excited to see where Mythos goes next! As a collector of horror fiction, I love having these little terrors displayed on my shelf! This is an Epic set and well worth grabbing for fans of minifigures and Weird Fiction. The PVC figures are so much cooler than the resin ones!

If you're interested in striking a deal with the Deep Ones, check out my review of the Deep One from Legends of Cthulhu.

For more of the Hound check out the Hound from the Mythos Early-Bird Collector's Package.

For more of the Red Death check out the Mythos Expansion 2: Edgar Allan Poe & Red Death

These are the first figures of Obed Marsh, the Fungal Fella, Basatan, Janai'ngo, Algernon Blackwood, Wendigo, and Azathoth.