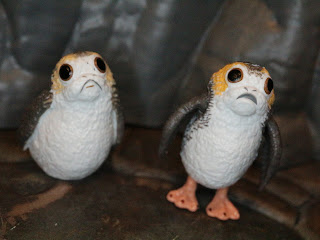 What do you think about the porgs? The porgs were created to deal with a real filming problem in The Last Jedi (the presence of puffins Skellig Michael where the Ahch-To scenes were filmed). Sometimes they're CG while at other times they're actually puppets. It's a pretty cool way of tackling the problem and created what for some people are the most recognizable creatures from The Last Jedi. I'm not porg crazy but I do like them and I was looking forward to them showing up in the Black Series toyline. Interestingly enough, the porgs were not ever included with any of the Black Series figures and have instead been sold as their own 2-pack. A very small 2-pack, I might add. The box is teeny, tiny at only 3 1/4 inches tall, 2 3/4 inches long, and 3/4ths of an inch deep. This is the first smaller sized Black Series release and it gives me hope that one day we may see more smaller creatures released this way if the porgs do well. They certainly seem to be selling just fine; they're hitting GameStop stores right now and most stores seem to be sold out of them. Let's take a look at this tiny two-pack of porgs after the break... 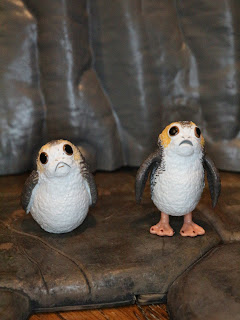 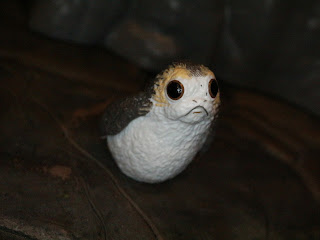 * The set includes two porgs, the first of which is sitting on the ground. This is a simple minifigure with no articulation that just sits around and adds some character to your Ahch-To display. The paintwork is pretty nice on these little guys give the small size and the sculpted fur and feathers is quite detailed. 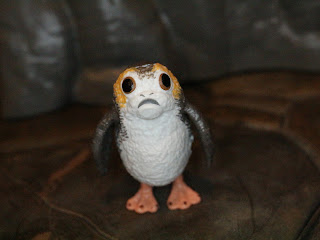 * My favorite of the two porgs is the standing porg. He has a funny expression on his face, slightly brighter orange around his eyes, and you can see his birdlike feet. He's pretty cute. 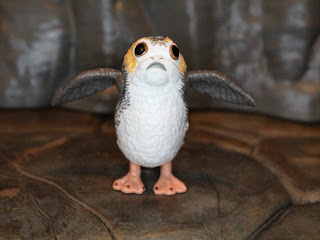 * He is also articulated. The porg's wings are balljointed so he can lift them up and his legs swivel so he can stand up straight. Is this perhaps supposed to be the porg who chills out with Chewbacca in the Millennium Falcon's cockpit? 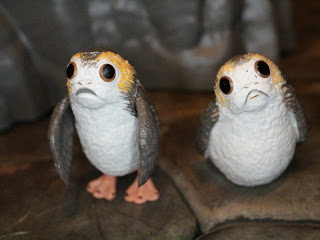 The porg set is what it is: A 2-pack of minifigures with little articulation but really nice paintjobs. They only cost around $6 or $7 dollars which may seem a bit high to some collectors (my guess is that minifigure collectors won't mind) but not high enough that it will hurt sales. Personally, I do think Hasbro should have either packaged a Porg with various The Last Jedi figures or released a set of five or six porgs and a nest accessory as a standard Black Series releases. This is a Good and a 1/2 set, though, and does seem like a fun novelty item to pick up for collectors of the Black Series.

These are the first porg toys I've reviewed. For more Black Series figures from Phase III, check out the following: