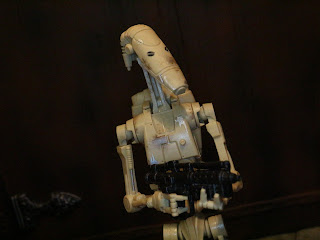 I just found four of the six figures from the newest series of Star Wars: The Black Series figures last weekend: Vice Admiral Holdo, Padme Amidala, Dryden Voss, and, the subject of today's review, the Battle Droid. I'm still looking for Mace Windu and Han Solo as a Mudtrooper. This is an interesting series of figures as it's not-related to the release of a film and yet doesn't have any Original Trilogy figures in it. That's highly unusual for this line! Mace, Padme, and the Battle Droid are three characters that I'm still flummoxed it took over five years to get in this line. The Prequels haven't gotten much love from Hasbro in the past five or six years but considering that Padme is one of the three stars of the Prequel Trilogy and Mace is Samuel L. Jackson as a Jedi, their long absence seems ever so strange. The Battle Droid also seems like he should have been a much earlier release. Considering how Hasbro loves figures they can repaint over and over, like Clone Troopers, the Battle Droid seems like it would have been a great selection for the line. We finally have a Battle Droid now and with 2019 being the 20th anniversary of Episode I, it's a nice touch. Let's check out the Battle Droid after the break... 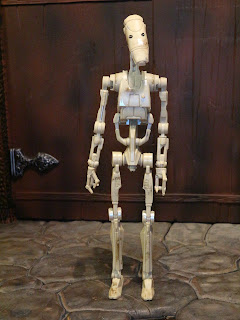 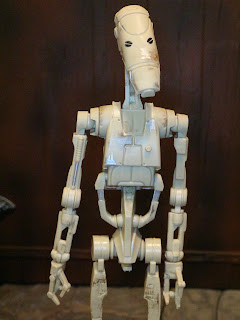 * Hasbro has been on a truly impressive roll with Star Wars: The Black Series over the past year or so and the Battle Droid is another hit. While there have been a few nice Bandai releases of the Battle Droid, Hasbro's effort is pretty impressive for at least half of the price. The sculpt is excellent and does a great job of looking like the film design while also feeling like a sturdy, well made toy. The Battle Droid is the standard bone tan version seen throughout Episode I (the standard infantry battle droid) and is nicely covered with minor little nicks and scrapes. 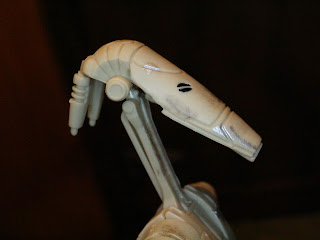 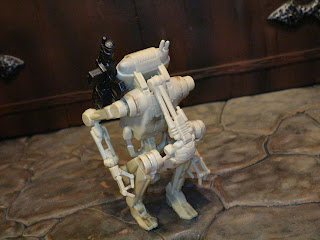 * Looking at the figure, all of the joints you would expect to work do work. Also, there are probably a few joints here you might not expect. Perhaps the best thing that can be said is that the Battle Droid can be folded up into it's storage mode/ shutdown mode quite easily. It looks great and while we'll (probably) never get an MTT in the Black Series, this is still a very fun pose for the Battle Droid. 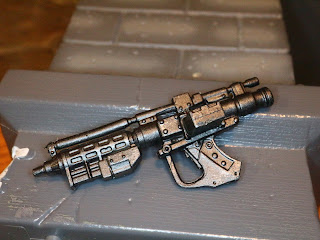 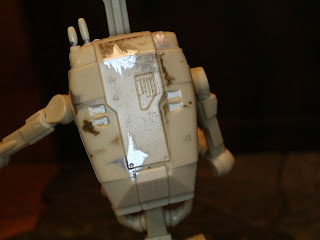 * The Battle Droid features a removable backpack. Like the droid itself the backpack is slightly dinged and damaged with believable paint applications. 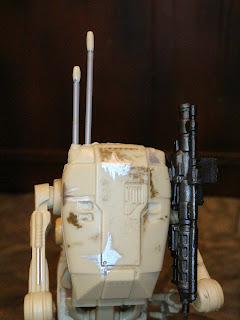 * Guess what? The antennae on the backpack can actually slide down into the backpack for storage. I didn't even realize that these extended at first until I pulled out my Episode I visual dictionary and started looking at things more closely. What a cool feature.

* The E-5 also plugs into the backpack. I remember loving this feature on the Episode I Battle Droid from 1999 and I'm still glad to have it. 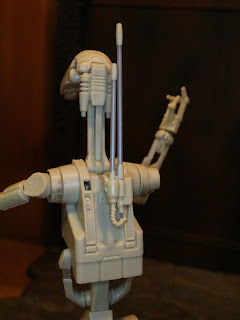 * Interestingly, the Battle Droid also comes with an interchangeable Command Officer's antenna array. Remove the backpack and plug this piece in to give your Battle Droid a little variation. While this droid doesn't bear the markings of the Command Officers, it's still a fun extra. I'm sure Hasbro will want to repaint this sculpt and I wouldn't turn down OOM-9, a red Geonosis Battle droid, or a Security Droid. I love the Security Droids! 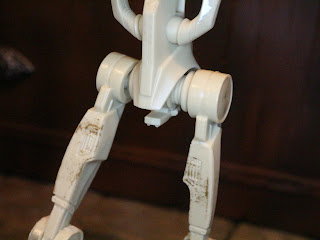 
* My only negative is that I wish the Battle Droid had just a bit wider range of motion in the hips. It does have balljoints but they don't allow the figure a very wide stance. 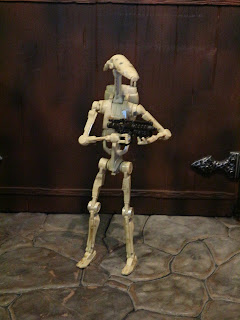 Considering the overall popularity of the Clone Wars, it's surprising that Hasbro has waited this long to deliver a Battle Droid. They did a great job with the figure, however, and for $20 dollars it is an Epic figure that offers up a definitive toy of the B1 Battle Droid. I love the design, the accessories, and the articulation, especially being able to out the Battle Droid into storage mode. There is some great engineering here and I'm thrilled by how durable the figure feels. Here we are 20 years after the release of Episode I and I'm still thrilled by Battle Droid toys. Crazy, right? Hopefully Super Battle Droids and Droidekas aren't too far behind, right? I was really hoping to see more Episode I stuff this year. Even though the release of Episode I: 3D led to some serious problems in toy aisles (seriously; apparently retailers thought it was a new film or something) there are some great designs in the film that would be awesome in the Black Series. At least we've got a Battle Droid, though, right?


You know what? This is the first Battle Droid I've reviewed on this site! For more Star Wars: The Black Series figures, check out the following: