Hey hey hey! It's the end of another week and, for me, it's been a great week. I've actually found all of the new series of Star Wars: The Black Series figures and managed to finish acquiring the newest releases from Target's G.I. Joe Classified Series Cobra Island exclusives. Reviews are all coming soon, of course, as I'm trying to cover all of the new stuff I've picked up as well as wrapping up the 2020 releases from the end of the year that I still have yet to cover. Starting in February I'll be putting out my "Best of 2020" lists weekly and returning to doing a monthly Masters of the Universe focus. I think I've got my character focus for January selected and I think you're going to love it! Anyways, why did I call this week's installment of Barbecue's Bonfire the Classic TV Edition? Because I've been watching some Classic TV shows along with the first two episodes of WandaVision, the new Disney+ series that kicks off the beginnings of Phase IV of the Marvel Cinematic Universe... 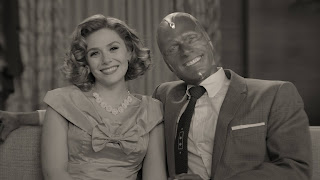 Last Friday night my wife and I saw down and watched the first two episodes of WandaVision. We loved it! It's easily the most unique MCU project yet. In middle school and early high school I adored Nick at Nite and I loved how WandaVision payed homage to the classic 1950s and 1960s sitcoms like The Dick Van Dyke Show, I Love Lucy, and Bewitched. Elizabeth Olsen and Paul Bettany are excellent and the show, thus far, is a charming mixture of classic sitcom antics and a very bizarre and somewhat sinister mystery show. I'm quite interested to see where this goes and how it ties into upcoming MCU projects. The show definitely benefits from being a weekly release (though the first two episodes were put out at the same time) as you get a chance to be in the weeds a bit and savor the mystery. I think the magic show from episode 2 was my favorite part. Paul Bettany was hilarious as Vision discombobulated by chewing gum in his internal gears while Elizabeth Olson was captivating as the "assistant" who has to take charge of the show, using her real powers to make Vison's tricks appear to be fake. I'm really looking forward to tonight's episode where Wanda and Vision apparently make their way into the 1970s.

Of course, I actually did watch some actual older TV shows after the break... 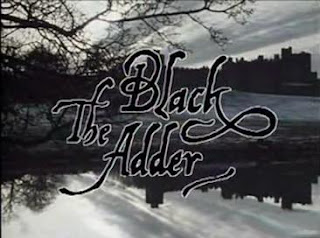 I'm a big fan of Rowan Atkinson, (especially Mr. Bean) but I had never seen all of Blackadder. I received the complete Blackadder collection for Christmas and my wife and I just finished watching the first series, The Black Adder. Set in the 15th century, The Black Adder tells an alternate history where Richard the IV (Brian Blessed) reigns because Richard the III was accidently killed by his great nephew, Edmund (Rowan Atkinson). Accompanied by his cronies Lord Percy and Baldrick, Edmund is constantly scheming to find ways to get ahead and set himself up to become king. It's quite funny and silly and while I'm sure there were quite a few jokes that went over my head since I'm not an expert on English history, I really enjoyed it. Edmund's schemes rarely pan out (though he does have his victories) and the show crams in plenty of medieval hijinks, made up saints, royal plays for power, and Brian Blessed being amazingly over the top. I only knew him as Boss Nass before this but, man, I love that guy! 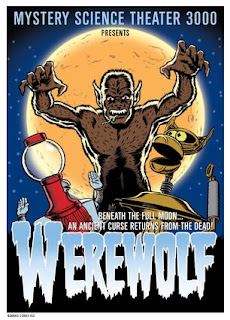 If you watch the Mystery Science Theater channel on Pluto TC then you know that they play this movie every other night around 11pm or midnight. Werewolf  is a 1996 werewolf film that the crew of the Satellite of Love riffed on in 1998 during the ninth season of the show. It's easily one of the best worst movies the series has showcased and it's an episode I own on DVD. After my wife and I made so many jokes about this one my daughter wanted to sit down and watch it. With inconsistent werewolf effects, the presence of Joe Estevez, Adrianna Miles' bizarre line delivery, the crew singing the 1960s ballad "Where, Oh Werewolf), Mike turning into a Werecrow, and a werewolf driving a car past the same gas station about five times before randomly driving into some exploding barrels, this episode delivers. Seriously, you'll never be able to pronounce werewolf correctly again after watching this one.

Before we wrap up let's take a quick look at the most popular reviews and articles of the week. There were actually quite a few changes this week with some long running favorites completely disappearing from the chart.

Lords of Power from Masters of the Universe Origins was the 2020 PowerCon exclusive set based on the prototypes for the vintage MOTU line when the line was still going to be called Lords of Power. The set is on its second week on the list and while it was way, way too expensive, it's also pretty cool for fans who take interest in the development of MOTU. MOTU Origins looks like it's going to have a big year in 2021 and that very well may drive up demand for this set.

Darth Nihilus from Star Wars: The Black Series was one of the 2020 GameStop exclusive Gaming Greats releases and he turned out very well, now jumping up on the list for his second week. Knights of the Old Republic has stayed very popular (I'd love a remastered release of the series on the Switch or X-Box One) and perhaps the interest in the High Republic era or the fan-edits of the cutscenes into films has driven interest in this Sith Lord.

Din Djarin (The Mandalorian) & The Child from Star Wars: The Black Series was another impossible to find Target exclusive in 2020. It's a popular set that's on the list for the first time this week. While most of Din Djarin is reused from the Phase IV standard release figure this is an all new version of Grogu and you get plenty of cool accessories.

Clone Trooper (Holiday Edition) from Star Wars: The Black Series is a festive repaint of the standard Clone Trooper packed with a Porg in a scarf and a giant candy cane of death. He's actually my least favorite of the Holiday Edition figures I've found so far but he's still fun to have around.

Mr. T from Masters of the WWE Universe is a Masters of the Universe themed Mr. T action figure. Do I really need to say anything else? Seriously, he's amazing. I love Mr. T! Me and my wife's anniversary is on Mr. T's birthday? Coincidence? She thinks so!

Have a great weekend everyone! Stay safe, enjoy WandaVision, read something cool, and enjoy life!