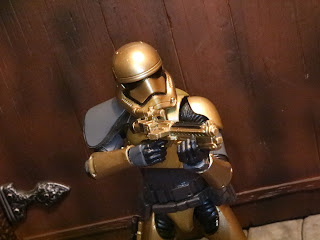 While Hasbro has transitioned their main line to Phase IV, many of the exclusives released later in 2020 have still been part of Phase III and today I'm checking out another one of those exclusives: Commander Pyre. Commander Pyre is part of the Galaxy's Edge subset of Target exclusives and is based on the character from the animated series Star Wars Resistance, which is the only canon Star Wars series I haven't watched. It just didn't interest me that much though at some point I know I'll need to give it a go. I like the look of this guy clad in gold armor (he's one of Captain Phasma's subordinates) and I figured that it's unlikely we'll ever see him again in the Black Series. Couple that with Target's buy two, get one free sale around Cyber Monday and picking Commander Pyre up was a no-brainer. Commander Pyre was originally released in one of the boxed sets at Disney's Galaxy's Edge attraction (along with a Mountain Trooper, Kylo Ren, and a mouse droid) but this is the easiest way to get him outside of the parks. Let's check him out after the break... 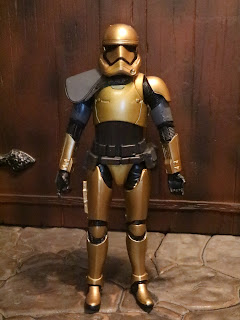 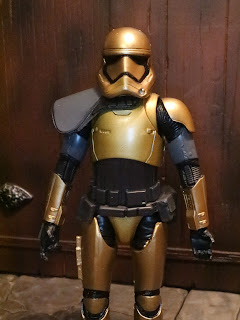 The Positives:
* Commander Pyre is largely a repaint of previous First Order Stormtroopers and the First Order Stormtrooper Officer but the presence of that gold armor really does look pretty slick. Some collectors seem to hate it but I really like the look of Pyre. He definitely stands out on the shelf. The mixture of black and grey for his bicep armor, belt, and pauldron also give him him a bit more color diversity, so he's more than just a gold First Order Stormtrooper. The paint has a great metallic sheen to it. 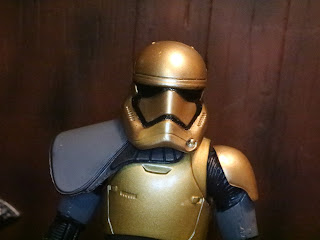 * I've always found the standard First Order Stormtrooper helmets a bit bland but Commander Pyre looks pretty nice in gold. Mix that with the shoulder pad and I think you've got a pretty solid looking figure. 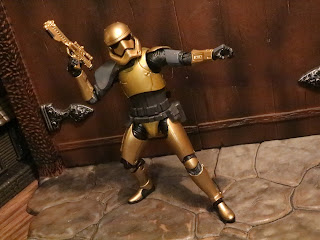 * The original First Order Stormtrooper was pretty well articulated at the time and while Commander Pyre retains much of that original figure his articulation feels much smoother. He definitely has new elbows with a much better range of motion. I wonder where these came from? Maybe some re-release of the FO Stormtrooper that I skipped? 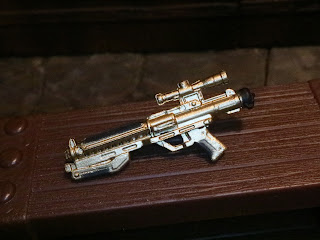 * Commander Pyre includes the two blasters that most of the First Order troopers carry, the most stunning of which is his gold plated F-11D. This thing is slick! Does it kill with just one shot? 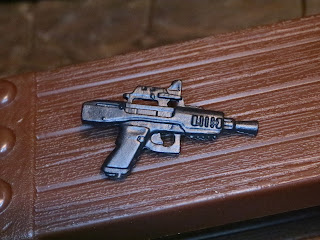 * Pyre also comes with an all black version of the SE-44C blaster pistol. The sculpt is really sharp and even though there's no paint it really goes well with the figure. 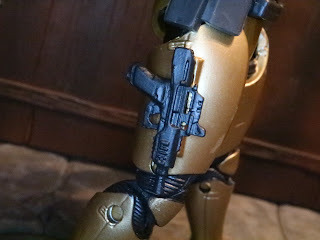 * Like the rest of the First Order Stormtroopers Commander Pyre has a port on his right thigh which can store either of the included blasters. It's a cool feature and it works really well. He looks really cool toting around his blaster like this, too. 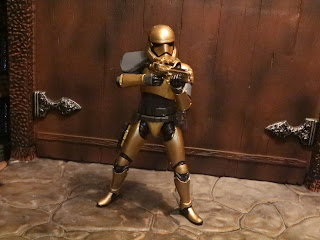