Wrapping Up 2020: Teela from Hot Wheels Character Cars: Masters of the Universe by Mattel 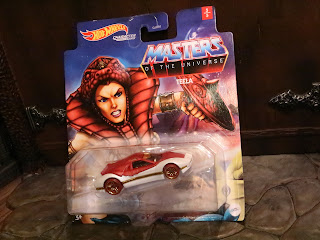 I had to make a run to the store today and I was amazed by the amount of Hot Wheels Character Cars out there! This must be a pretty popular line! They had Reptar from Rugrats! Anyways, I found my Masters of the Universe Character Cars a few weeks ago at a local grocery store which was kind of cool. I've shopped there for about 13 years now and I don't know that I'd ever bought a toy there in all that time. I reviewed Man-At-Arms yesterday and today I'm checking out Teela. If you're not familiar with these, the gist is that they're not just cars painted with images of the characters on them but cars designs inspired by the characters. Man-At-Arms' car is pretty crazy and over the top but Teela's is a lot more subtle. Let's check her out after the break... 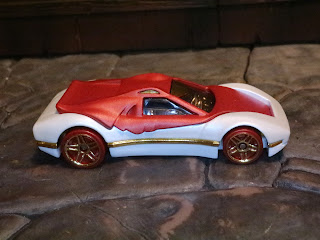 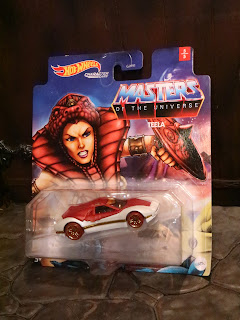 * These come packaged on a simple blister card, just like any other Hot Wheels car, though the art on the card is much cooler and features Teela bashing someone with her shield. 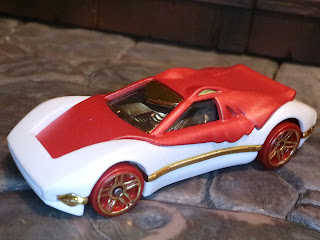 * Teela's vehicle is a sleek sports car inspired by the snake motif of her snake armor from the vintage toy. The body of the car is white, like Teela's outfit, while the canopy is red, serpent looking, and decked out with green eyes on the top sides. 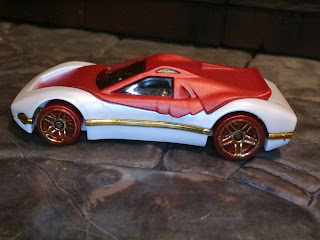 * Teela's costume has a lot of gold highlights so the side of the car has a metallic gold streak running down it. There's also a tip on the end of each streak on the front that may reference either the tip of Teela's spear or the gold leaves on her costume. 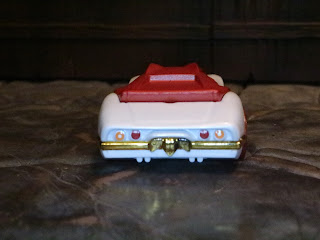 * The rear of the car also has a little homage to the gold, leaf-like decos on Teela's outfit as thee is a trio of gold leaves where the license played would be. 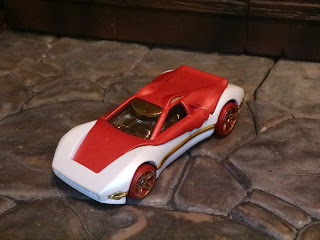 The design for the Teela car is way more subdued than the Man-At-Arms car though I'm not sure if that's a good thing or a bad thing. I've admittedly never been a car guy but I do like this design quite a bit and I had fun looking for all of the references to the character. It's definitely more expensive than your average Hot Wheels car but it is a unique model (even the bottom of the chassis says "Teela" on it) and it's quite nicely done. I'm giving this one a Good and a 1/2. I've still got Skeletor and Beast Man to review and I'm still looking for He-Man, so you'll probably see more of these character cars soon.

Was Teela one of your first loves? If so, check out my reviews of many various Teela toys such as the vintage Teela, the M.U.S.C.L.E. green Teela and the standard M.O.T.U.S.C.L.E Teela, the Mega Construx Teela from the Battle for Eternia Collection, the series 2 single packed Teela, and Teela from Battle Bones, the 200x Snake Teela, the ReAction Teela (Shiva), the NECA Teela micro-bust, the Masters of the Universe Origins Teela, the neo-vintage Teela and Frozen Teela, the Tweeterhead Teela bust, an appearance in 1983's Colorforms Masters of the Universe Deluxe Play Set, and Super7's Ultimate Teela.

For more Hot Wheels Character Cars: Masters of the Universe check out the following:
Man-At-Arms