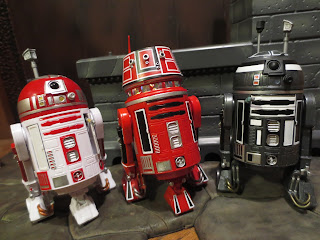 Today I'm looking at the last Star Wars: The Black Series release of 2016 that I'll be covering. Actually, I believe I'll have reviewed every figure except the rereleased Rey with a lightsaber (I already own the first version and the K-Mart exclusive Starkiller Base version, so there was nothing new in the set), the standard Kylo Ren (he's the same as the Celebration version, just without the cool accessories), and the single carded Obi-Wan Kenobi (who's the same as the SDCC 2016 Obi-Wan, again without the cool accessories). This set is a Toys R Us exclusive that was also kind of, but not really, a SDCC 2016 exclusive featuring three astromech droids from the Battle of Yavin: R2-A3, R5-K6, and R2-F2. Two of these droids are straight up repaints of the Black Series Phase I R2-D2 while R5-K6 features a new head, so refer back to that review for a full rundown of the sculpt and such. I'm going to be paying more attention to the new or unique stuff here. Let's check these droids out after the break... 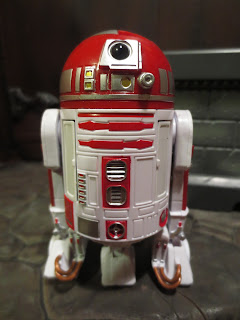 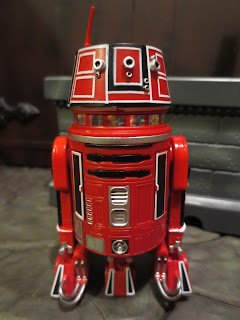 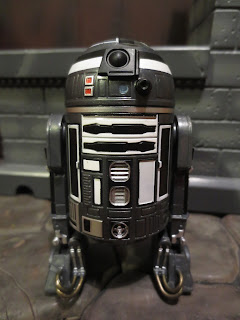 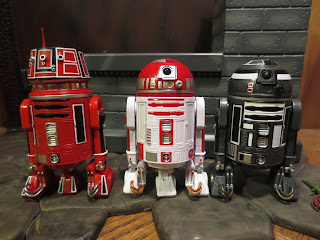 * Putting these three together, you really have a nice looking set of droids. Whether you're fleshing out a display or just standing all of your R2 (and now R5) units together, Hasbro has given you a bit more to work with. The paintwork on the bodies and the color schemes on these three are excellent. 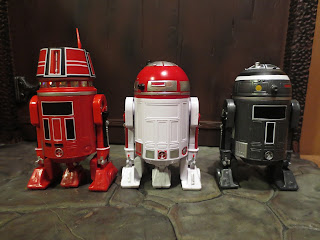 * These little droids look great from the back, too. The paint work on the bodies all look just fine, plus they have some cool color schemes. 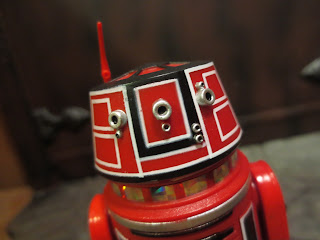 * The most exciting part of this set is without a doubt R5-K6, the astromech of Garven Dreis. I haven't went back and looked but since Garven Dreis is in Rogue One at the Battle of Scarif, is R5-K6 there, too? R5-K6 is the first R5 unit we've received in the Black Series, so his head is a completely new sculpt. I'm sure we'll eventually get an R5-D4 (since he's got vintage Kenner cred) which is a good thing. I like the headsculpt and the little antenna. Oh, and the shiny neck ring. It's a sticker but it looks great. 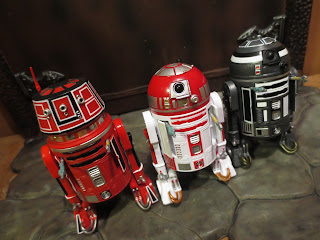 * Like R2-D2, each of these droids feature the two hinged panels on the front of the body that open up. Inside is a hinged claw arm on the left and a data port/ universal computer interface arm on the right. While they're part of the reused sculpt, these little features are still a lot of fun.

Of course, the third legs on the droids are also all retractable and function the same as R2-D2's. 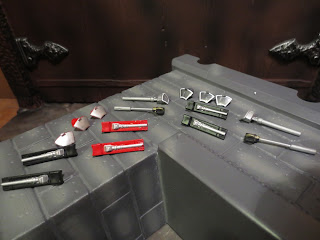 * While they don't include everything that R2 came with, the astromech droids in this set do include quite a few goodies. R5 only includes the leg panels (these came off so R2-D2 could wear his jets) both R2 units include their dome plugs and two sensor scopes each. 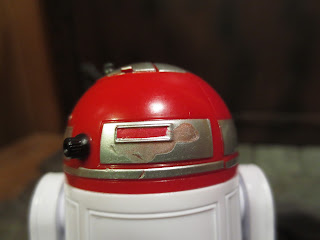 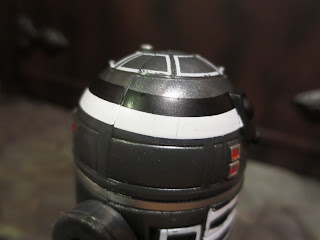 * Biggs Darklighter's astromech, R2-F2, has cool black and white stripe around the top of the dome. It's too bad, then, that Hasbro really goofed up the stripe on mine. Just looking at this, you can tell that the paint app is wildly out of line. I know that the Rebel Alliance was on a shoestring budget, but c'mon: Someone should have been assigned to QA. 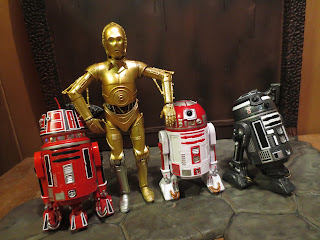 * Aren't you a little short for an astromech? Something that's become more problematic over time is that the R2 units in the Black Series are just too small. Rather than re-release a newly scaled R2-D2 (it's now been over 3 years since R2-D2 was at retail), Hasbro has now cranked out three more undersized droids. At this point Hasbro either needs to fix R2-D2 and leave us with mismatched droids, or keep going and give us with undersized droids. My guess is that we'll eventually see a correctly sized R2, but these guys will always be a bit off scale-wise. 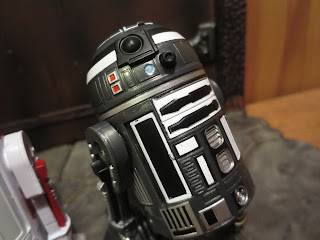 I like this set, although there are some strange things about it. First: Why release these three droids? Are we getting Wedge Antilles, Biggs Darklighter, and Garvin Dreis anytime soon? Second: Is Hasbro just going to ignore the size problems with the R2 units now? Third: Why the sloppy paint apps on the domes of the R2 units? There's still a lot of really good stuff here, though, especially the extra pieces and the new R5 unit headsculpt, but this is definitely a set for the completest. It's Good, but designed for a pretty specific population of Star Wars fandom. These are starting to get kind of scarce, though, so if you want one you'd best grab it soon. These came out in June or July and have been kind of hard to track down. I'm glad to have it, as I realize some repaints are what makes the majority of new sculpts in this line possible, but there are definitely some flaws.


I don't own any other figures of these guys, but I have reviewed plenty of other Black Series Phase III figures, including: