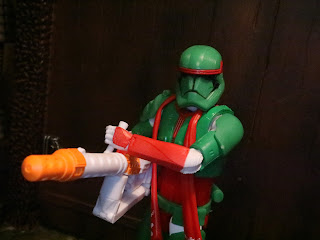 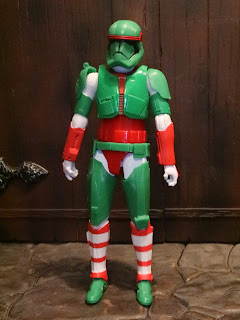 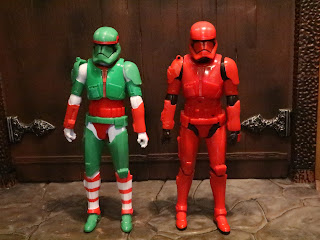 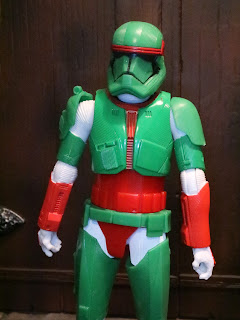 * I love the texture of the Sith Trooper's armor and while he's not as fearsome in red, white, and green, he's far more festive! The mixture of colors definitely gives off a Christmas feel and everything looks neat and clean here. 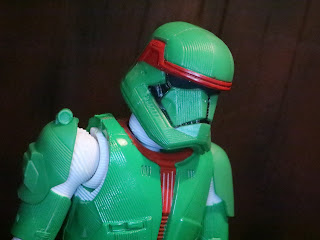 * The helmet looks great in green with just a bit of red around the edges to give it a more festive look. He kind of looks like an elf, doesn't he? 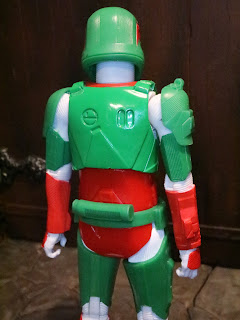 * The Sith troopers don't look too different from previous troopers from behind: They've got the standard details and explosive device on the back. Of course, rather than being for destructive purposes I imagine this one is more like a Christmas cracker or something. 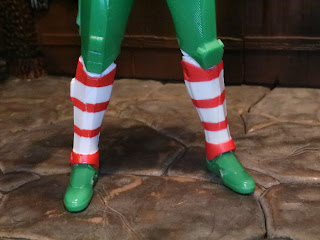 * Like the Holiday Edition Clone Trooper this fellow is also sporting some festive greaves! He's rocking red and white stripes, just like a candy cane! 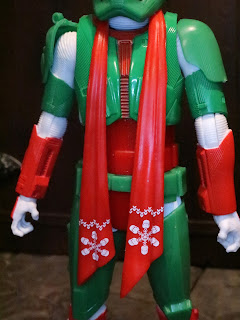 * The most creative part of this figure is Hasbro reusing the scarf from the Solo Lando Calrissian figure to create a Christmas scarf for the Sith Trooper. How cool is that? The pattern on it is even little Sith Trooper helmets in a snowflake pattern. 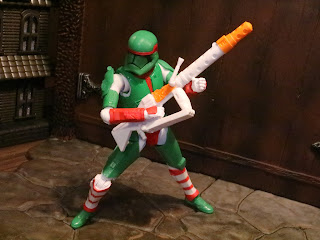 * The Sith Trooper is one of the most well articulated troopers in the line. Seriously, his range of motion is excellent. He's also really durable and has all of the recent articulation features you would expect from the Black Series. 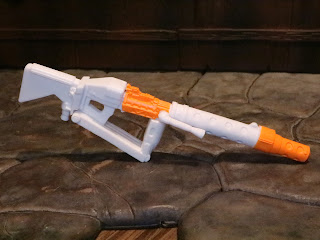 * The Sith Trooper comes packing a massive megablaster that fires... NERF darts? Yup! Actually, what Hasbro did is simply repaint the megablaster from the SDCC 2019 Sith Trooper with the white and orange color scheme of some of the newer NERF blasters. I love it! It's fun. Maybe he's preparing this toy for some good little child for Christmas? The megablaster does have a removable handle on on the top and the bottom bar is removable as well. 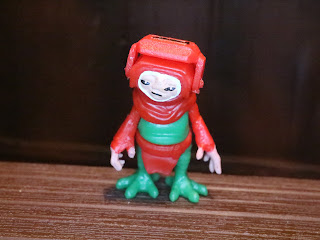 * Babu Frik is included as a companion to hang around with the Sith Trooper for some holiday hijinks! He's a tiny little guy and is repainted from the 2019 release (he was packed with C-3PO) in festive reds and greens. 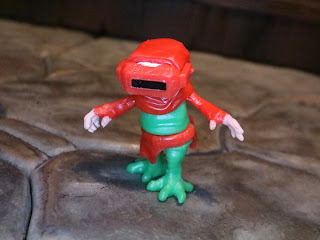 * He not only looks like one of Santa's little helpers; Babu Frik is also articulated so he can help! He features a swivel waist, balljointed shoulders, and hinged welding goggles. That's pretty impressive, right? 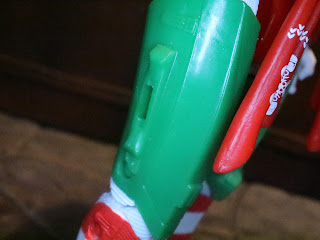 * You all should know by now that I get irritated when a figure has an empty holster or sheathe or something because the company fails to include a working accessory. Well, the Sith Trooper (Holiday Edition) has the port on his right thigh to hold one of the blasters the original figure came with, but guess what you don't get? A blaster! It's like a lump of coal in your stocking. 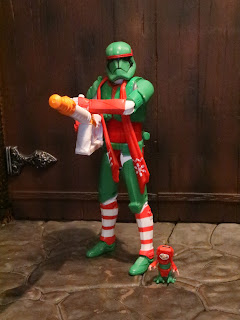 Considering that these guys are just goofy repaints I didn't expect many of them to be that fantastic. This guy, however, is pretty darn Epic. The NERF blaster is really cool, Babu Frik in elf disguise is a darn good little companion figure, the Sith Trooper is a great figure who actually looks pretty cool in this paint scheme, and the repurposing of Lando's scarf is pretty darn inspired. This guy definitely might be the best of the lot! Seriously, check him out if you can. Even with the $5 Hasbro exclusive tax this guy feels kind of worth it thanks to the minifigure companion and the massive weapon. Ho Ho Ho! Now I've got a megablaster!

If you're interested in the more of the Sith Trooper check out the standard Black Series Sith Trooper.

If you're a fan of Babu Frik I've also reviewed the original Black Series pack of C-3PO & Babu Frik.