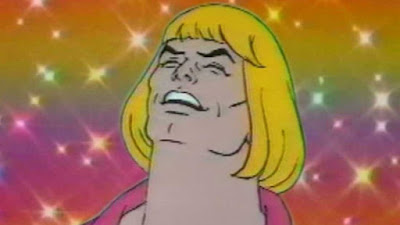 I am Adam, Prince of Eternia, Defender of the secrets of Castle Grayskull.
This is Cringer, my fearless friend.
Fabulous secret powers were revealed to me the day I held aloft my magic sword and said "By the power of Grayskull, I have the power!"
Cringer became the mighty Battle Cat and I became He-man, the most powerful man in the universe.
Only three others share this secret: our friends the Sorceress, Man-At-Arms and Orko. Together we defend Castle Grayskull from the evil forces of Skeletor!

Masters of the Universe Magnets by Monogram International (2021)
He-Man

Masters of the Universe Ultimates by Super7 (2017)
He-Man (Filmation)