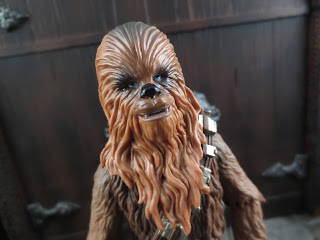 So, does anyone find it strange that we are over two months out past the release of The Force Awakens with Toy Fair 2016 also having come and gone and we still haven't seen any figures of Leia or Luke from the new film? I mean, I know that Luke didn't have much screen time but Hasbro has made far plenty of figures of characters from The Force Awakens had far less and were far less significant. In fact, it was really bizarre that Hasbro even waited until after the film's debut to release any figures of Han Solo. We did did one member of the legacy cast in the first series of The Black Series figures released back on Force Friday, though: Chewbacca! I held off on picking this guy up for awhile but finally snagged him for a good price. Ready for a look at the newest version of everyone's favorite Wookie? Then join me after the break... 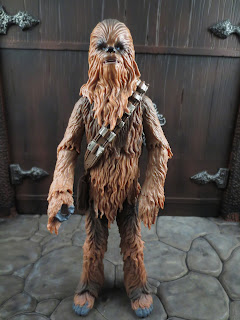 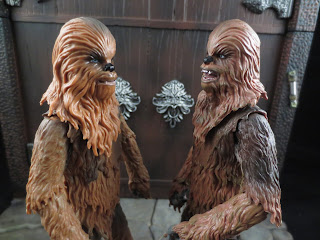 At first I was a bit reluctant to pick up this figure because largely it's just a repaint of the 2014 Chewbacca release from The Black Series: Phase II. The body sculpt is exactly the same, so check out that review for all of the nitty, gritty details. I turns out that there are some differences, most noticeably the headsculpt, the new satchel, and a new bowcaster. The paint is a little different,too: It's lighter and actually looks a bit lighter than the earlier figure's. 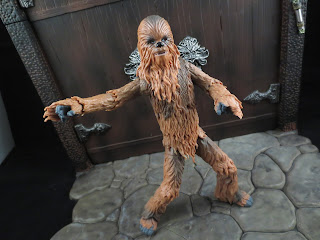 * Two things that I really like about this Chewbacca figure: He's really big and he's really sturdy! Remember when the POTF2 Chewbacca was only a teeny bit shorter than Han? Those days are far behind us as this Chewbacca is appropriately tall. He's also a really durable figure. There are some articulation problems (I'll mention them in a second) but Chewie is still a pretty good toy. 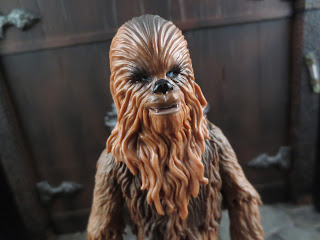 *The original figure had a more severe, barking expression on his face. This Chewie is a bit more passive and pleasant. The head is also shaped differently, looking much more accurate in my eyes. Unfortunately, the heads are not interchangeable as this head doesn't want to come off. Also, the paint jobs are fairly different. 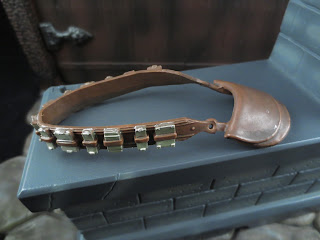 *Han's not the only one to get a new outfit! Chewbacca has a different satchel and bandolier in The Force Awakens. It's a nicely sculpted and painted piece of the new accessory and it nicely shows how this new pouch is more rounded than the original satchel. 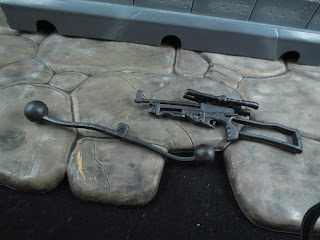 * Chewie doesn't come with the same bowcaster that was packaged with the original Black Series figure. Instead, he gets a new sculpt that looks to be quite accurate to the weapon he uses in The Force Awakens. The crossbar that holds both of the polarizers is also much sturdier than on the previous figure and it stays on tight without falling off at the slightest breeze. 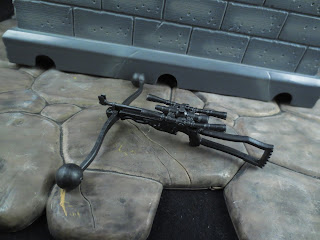 
*Chewie's crossbow doesn't have any paintwork at all. The previous figure had a nice drybrushing effect on it, but this one is a bit plain. Also, there's still no sling for it. 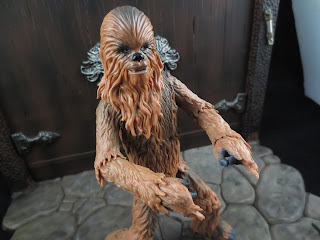 * Like the previous Chewbacca figure, Chewie's elbows are really limited in their range of motion, so getting him to hold the bowcaster with both hands takes a good bit of work. Unlike the previous figure, this Chewbacca has almost no motion in his head. The Black Series Phase III figures seem to have the neck pegs set deeper into the headsculpts and just aren't removable and interchangeable like the earlier figures. This causes some problems, which we'll see below... 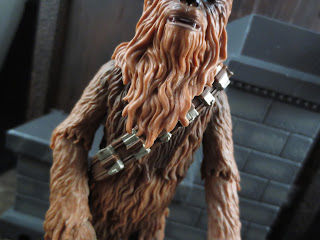 *Notice the visible spot in the fur where the strap ran across Chewie's body on the previous figure? For some reason, this Chewie's bandolier just doesn't want to line up properly. Part of that is because of the lack of movement in the head which prevents you from being able to fidget with the head and the bandolier to get it to sit right. 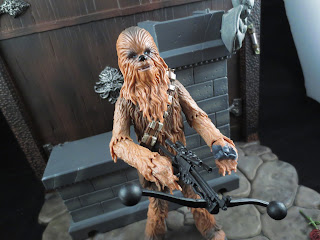 Honestly, I bought this Chewbacca because my TFA Han Solo looked lonely and I didn't want to make two Hans share one Chewie. While there are definitely some nice differences here, and an improved bowcaster sculpt, the less dynamic paint job and the non-functioning head actually  make this figure less impressive than it's predecessors. This is honestly an Eh and a 1/2 figure. Unless you're a completest or really need a Chewie, this guy might be worth skipping, particularly if you already have the former figure.