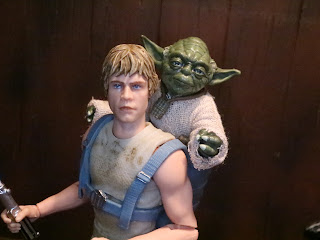 So....seen anything good on television lately? I'm not going to say anything further but if you have then you know what I'm talking about, right? *High five*

Anyways, 2020 is the celebration year for the greatest Star Wars film of them all, The Empire Strikes Back, and while Hasbro did release a Kenner inspired 40th Anniversary Collection subset for the Black Series the deluxe figures were released as part of the standard Black Series Phase III. Luke Skywalker & Yoda (Jedi Training) are labeled as the fourth set of the deluxe releases (the Probe Droid was the third) and was essentially sold as a two-pack. I love the Dagobah scenes from TESB and watching Yoda ride around on Luke during his Jedi training really is a pretty memorable image from the saga. Kenner's Power of the Force 2 figures were the Star Wars figures I had as a kid and I vividly recall stumbling upon the series containing Luke Skywalker in his Dagobah fatigues and Yoda with my mom on a trip to Toys 'R Us. It was pretty exciting to finally be able to add Yoda to my collection and having a figure that I knew didn't appear in the vintage line was pretty exciting. Of course, that Luke was really bulky and ripped but he was still very cool. Of course, this guy's even cooler than that figure and getting him and Yoda together is convenient. This is actually a modified Yoda as the earlier release (who I've apparently never reviewed) was quite oversized and wouldn't fit on Luke's back very well. Ready to jump in for some Jedi training? Then join me after the break... 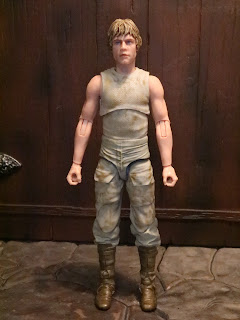 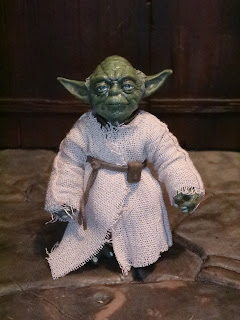 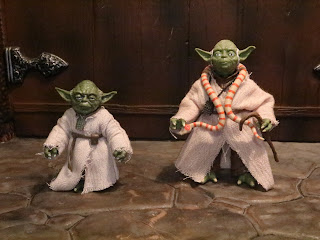 * The new Yoda from this set is on the left while the previous Yoda from the Black Series Phase II is on the right (he's also been re-released in the Archive Series and in The Empire Strikes Back 40th Anniversary Collection with facial printing). Yoda is only supposed to be 2.2' so this figure is about dead on for The Black Series being a true 6 inch scaled line. 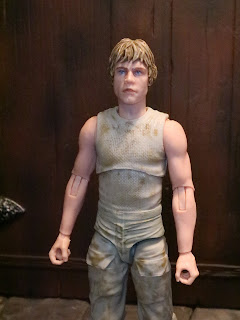 * Let's start by taking a look at Luke in his training gear, which is actually his "Bespin" fatigues without the button up shirt. Hasbro offered up a completely new sculpt though and it looks fantastic. This is a simple outfit for Luke but there's excellent work on his proportions and on the texture of the shirt and the pants. There's also a bit of mud on the outfit which is just a side product of training on a slimy mud-hole. 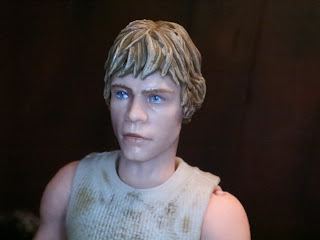 * The headsculpt is fantastic, too. Hasbro has been doing an excellent job of capturing Mark Hamill's likeness ever since they started offering the photo real likenesses via the face printing technology and this one is another winner. I like how Luke's hair looks quite tousled and sweaty, which is fitting given the training Yoda put him through. 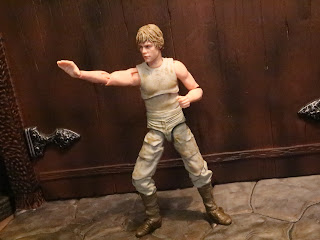 * Luke uses the new articulation scheme for the Black Series and it all works really well. He's got the new swivel/ hinge hips rather than double joints, the swivel /hinge elbows with the better range of motion, a ball jointed base of the neck, and the butterfly shoulders. Everything's solid, fluid, and helps him to take on nearly any Jedi training pose you can think of. 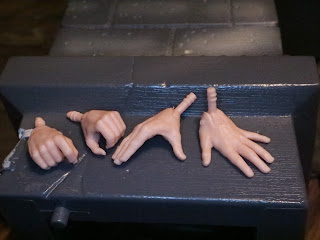 * Luke comes with four interchangeable hands, something we don't see all that often in the Black Series. You've got a standard pistol grip right hand and a gripping left hand as well as an outstretched right hand (great for lifting objects with the Force) and a left hand for doing hand stands. Does it work? 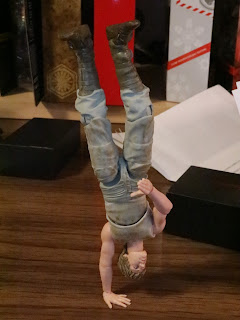 * Yes! Yes it does! I don't know that you could display him this way long without some additional support but I was able to use this alternate hand and keep Luke standing upside down hands free. How cool! 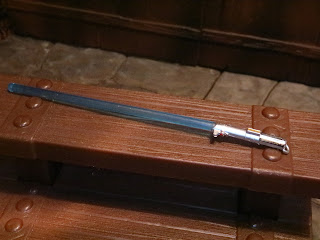 * Luke comes with his lightsaber which doesn't seem any different than any other version of the Skywalker family lightsaber we've had. Still a nice sculpt and it still has a removable blade. 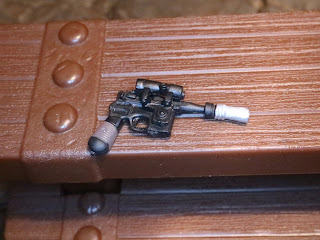 * He's also packing his blaster pistol, useful for blasting at droid eating creatures in the swamps of Dagobah for sure. 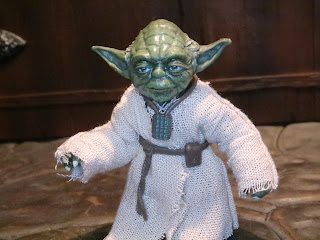 * Yoda looks quite nice. I have a few criticisms, which I'll get to in a moment, but overall I like him. His outfit is pretty decent and he's wearing his belt (it's not removable so far as I can tell) and the little flute he wears around his neck. Since his head is removable to swap out the two included portraits, the flute is removable, too. 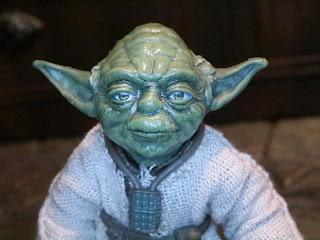 * The headsculpt is amazing. This is a really good Yoda portrait. It really is quite realistic and captures one of Yoda's facial expressions nicely. 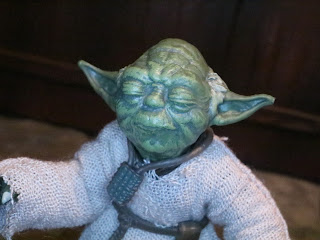 * The alternate portrait is Yoda with his eyes closed, focusing on lifting an X-wing. I love it. It's really cool that Hasbro gave Yoda an extra portrait. I wish Luke had one, too, though Yoda's is definitely very, very memorable. You know, you c could also use this as a dying Yoda from Return of the Jedi. Just saying... 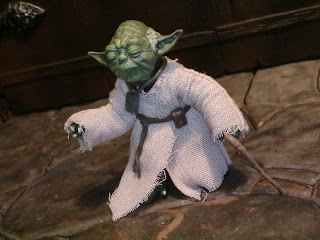 * Don't judge Yoda by his size! Though he's only a little over 2-inches he's nearly as articulated as most other standard Black Series figures. You can't see all of the articulation under his robe but it's almost all there. 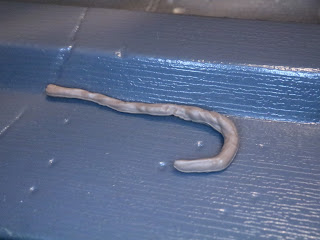 * Yoda doesn't come with many accessories but he does include his gimer stick, a gift from the Wookies. 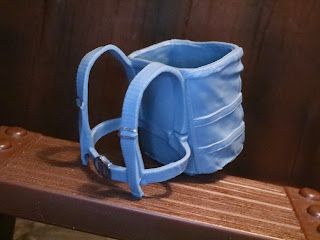 * The set also includes the backpack for Luke to tote Yoda around in. It's a nice piece that easily fits around Luke's torso. 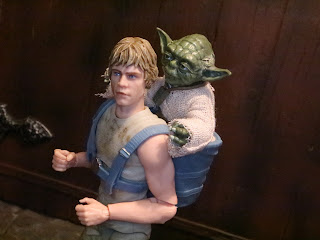 * Yoda fits in the backpack perfectly. Doesn't this pair look incredible? This is an excellent way to display these characters on the shelf and Hasbro did a really nice job getting everything to work properly. 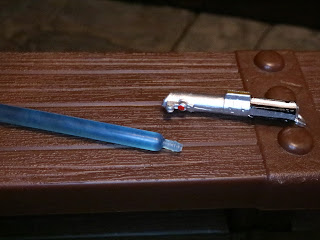 * Like nearly every other Black Series lightsaber, I'm still nervous about the seemingly fragile tip on this one. Popping it in and out of the hilt makes me very, very nervous. I'd rather have one hilt and one lightsaber with the hilt permanently attached instead of this! 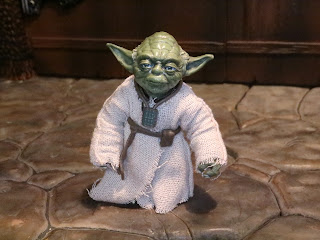 * Does Yoda's head seem a bit oversized to you? I think so and, from looking at the comments of other Star Wars collectors, I believe I'm not alone. Yoda's noggin is a bit too large here. It's not much smaller than the head from the previous figure though his body is much smaller. That's a weird issue, isn't it? Since Yoda is an alien species it's not as noticeable as it would be if Luke's head was oversized but it's still a bit of an issue. 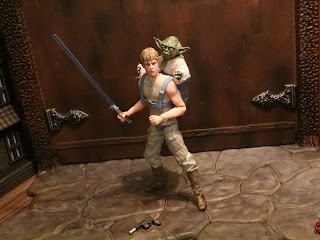 This is a really cool set although given Yoda's smaller size and lack of extra accessories it seems a bit questionable for Hasbro to price this like a 2-pack. Actually, at most stores you'll actually find this price at $45 dollars rather than $40, so you're paying a bit of a premium, too. Still, it's quite a nice set and it'll make you want to set up some Dagobah scenes on your shelf for sure. Luke training Yoda is truly an iconic movie image and it's great to see it captured in the Black Series. If you don't want Yoda for some reason, you can get Luke by himself in the 40th Anniversary Collection, though without the extra hands and backpack.

If you're looking for more reviews of Luke Skywalker based toys check out Tosche Station.

Do you seek Yoda? If so, check out the Hero Mashers version, the Black Series Yoda (Force Spirit), the Micro Machines Classic Characters (2nd edition) Yoda, and the green hologram Yoda from the Micro Force advent calendar.