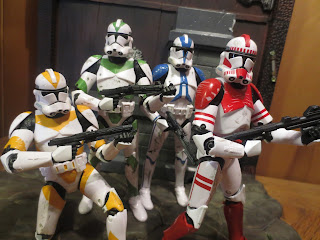 Today I'm reviewing now one, not two, not three, but four Star Wars: The Black Series figures! Like last year, Entertainment Earth is offering an exclusive set of four Star Wars action figures. This time it's a set of Phase II Clone Troopers in a variety of colors. While all four figures are exactly the same so far as sculpts go, the paint work on these troops is some of the best we've seen in the Black Series. These guys started shipping a couple of weeks ago and come packaged in a single box that features a removable slipcase and all four figures in their own trays, although they are connected together. Let's take a closer look at this set of Clones after the break... 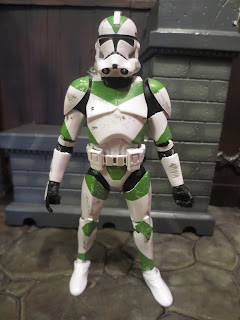 Non-Scalper Price: $100 for the set (although shipping was free through Entertainment Earth). 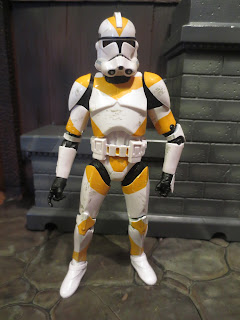 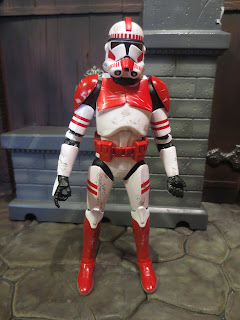 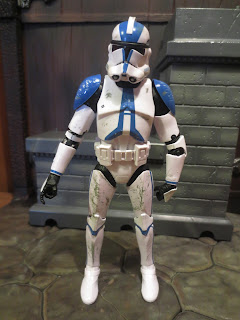 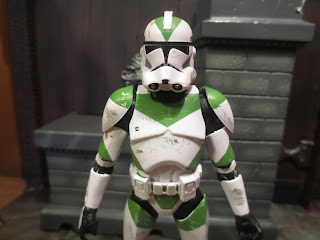 * First things first: All four figures in this series are exactly the same mold but with different paint applications. Fortunately, the paint applications are pretty darn good. The 442nd Siege Battalion Clone Troopers didn't appear in Revenge of the Sith, but instead were based off of some concept art. Decked out with green armor highlights, these troopers led sieges on Cato Neimoidia and possibly spent some time on Kashyyyk. 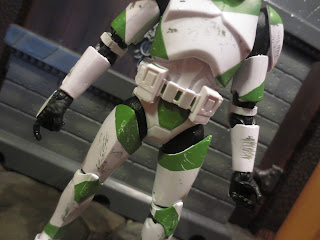 * Had Hasbro just painted these troopers in their unit distinctive color markings, they would have probably looked pretty cool. Hasbro took things to the next level, though, and gave each figure some very impressive battle damage. This is much better than the simplistic Stormtrooper from last year and instead features grime on the armor, chipped paint on the unit markings, and scratched armored plates. 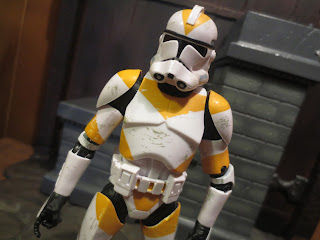 * The 212th Attack Battalion Utapau Trooper definitely appears in Revenge of the Sith, giving Clone Commander Cody and Obi-Wan Kenobi someone to pal around with while hunting for General Grievous. Hopefully we'll get a Grievous in the Black Series soon! Anyways, these guys feature yellow armor highlights in the same pattern as the 442nd troopers, so you get a nice mixture of uniformity and distinction. 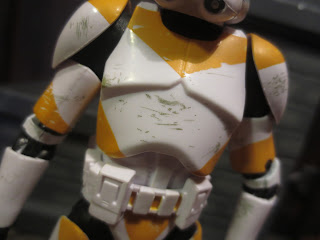 * The 212th Trooper also has lots of wear on his armor. The armor is covered with splatters of mud and grime while the yellow paint markings have been worn away a bit by the non-stop battles of the Clone Wars. 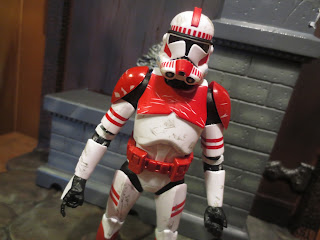 * The Coruscant Guard (Phase II) appear in the Senate battle scenes and on Mustafar in Revenge of the Sith and throughout the Clone Wars series. These guys look really, really cool. They've often been called Shock Troopers, but the Coruscant Guard designation has official status now. The red and the white is just impressive, is it not? 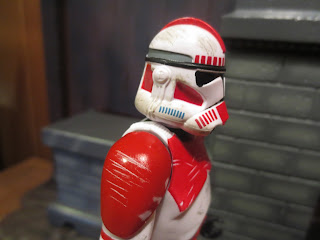 * Looking at the side of the Coruscant Guard you can see that not only do the paint apps on the helmet look exceptional but the scratches on the shoulder and chest armor are really well done. There's even some weathering on the helmet, too. Again, it can't be overstated how well done the damage is on these figures. 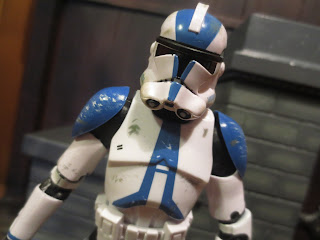 * Last, but not least, is the 501st Legion Clone Trooper. These are the dudes who accompany the fallen Anakin Skyalker to the Jedi Temple. It kind of sucks to see that, especially after seeing how heroic they were throughout Clone Wars. Personally, I'm so glad that Clone Wars, Rebels, and the new canon has fleshed out Order 66, making it less just "Clones, kill Jedi!" and more a secret programming that they couldn't override. 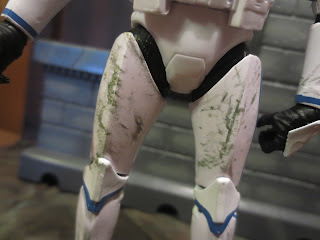 * Here's a closer look at the wear and tear on the 501st Trooper's legs. The paint work on this set is just excellent and it really makes this one worth considering if you collect Clones or armored troopers in general in this scale. Between this set, Sabine Wren, and the Scarif Stormtrooper, I think Hasbro has really shown that they've upped their paint game this year. 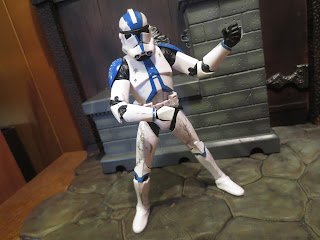 * While a few better articulated figures have appeared in The Black Series over the past year or so, the Clone Troopers are still action figures that you can sit around posing and reposing without any fear of breakage. These guys are truly some of the best toys out on the market right now, plain and simple. The articulation really lets you give this guy plenty of expression in his poses. The figures in this set also have much less rubbery knee and elbow joints than most of the regular releases. 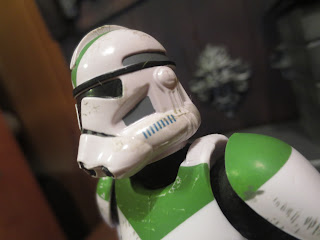 
* The way the heads are molded definitely hurts the range of motion in the balljoint. While the neck hinge still works, allowing for vertical movement, the ball joint sort of functions more like a simple swivel joint doe to the excess plastic here. 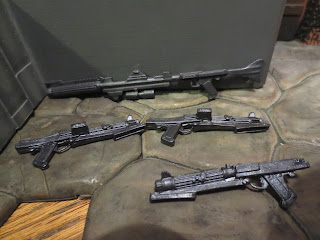 * To date, every Clone Trooper in the Black Series has come with 2 blasters: The DC-15A (short blaster) and the DC-15 Blaster Rifle. Heck, some of the troopers have even had paint applications on their blasters. That's why it's a bit disappointing that this set only gives each trooper one blaster. We get nothing new, no paint apps, and less weapons. Bummer. 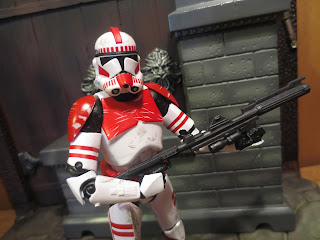 * I don't usually address price much when reviewing figures, but I feel the need to do so here. This set costs $100, although that means it qualifies for Entertainment Earth free shipping. Still, you're really getting four figures for the price of five instead of any kind of bargain. Considering the set includes fewer accessories than a standard release and nothing new, this one definitely might make you feel a bit sour. More money for a group of repaints? I know this is made in fewer numbers than most new figures, but surely the repainted nature of the set would cover that, right? 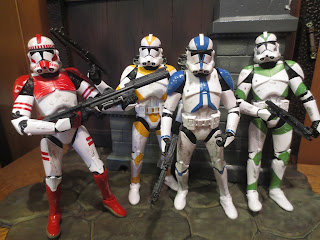 These are some really impressively painted figures. Still, they're repaints, feature fewer accessories, and they're kind of overpriced. I love each Clone Trooper here, but I wish Hasbro would have given us two rifles, or maybe even one or two new accessories for the set to make the price hike a bit more justifiable. I don't think anyone would be disappointed in these, but I imagine many Black Series collectors will have to determine whether or not they really need these in their collections. All things considered, this is a Good and a 1/2 set. Get it on sale and you can easily jump it up a few points.

If you're looking for more Star Wars figures from Phase III of the Black Series, check out the following: