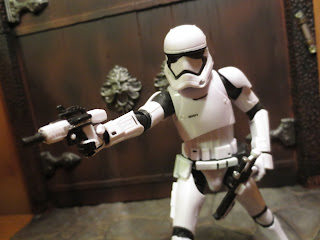 While a very similar version of this figure was available as an exclusive at SDCC 2015, all customers now have a chance of snagging one of these guys since he's included in the first series of Star Wars: The Black Series Phase III figures. Packed at one per case, I do believe that the First Order Stormtrooper is the most difficult figure to find in the assortment at this time. He's an amazing figure and a troop builder, so that makes perfect sense. I've been reviewing my Force Friday hauls over the past week or so and now I'm finally on to the stuff I grabbed at the second store I visited: Wal-Mart. While Toys 'r Us barely had any of the Black Series figures, the Wal-Mart I went to was absolutely stocked! I snagged this guy and some other stuff to complete my Force Friday haul. Ready for a closer look? Then join me after the break... 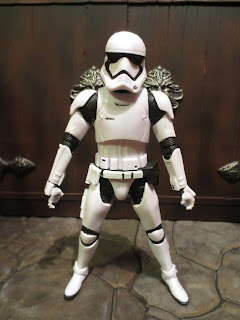 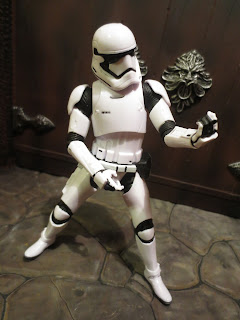 
* Like most figures in the Black Series, the articulation is quite good. While he's missing the double hinged elbows of previous Stormtroopers, everything else is exceptional. There's a fantastic range of motion in the ankles, knees, mid torso join, and head. You'll have no trouble getting some fun, awesome looking poses. Oh, and check out how this guy can wail on an air guitar! Only First Order Troopers are this bodacious! 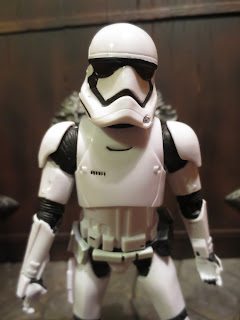 * The sculpt on this figure is just incredible! The armor is incredibly cool and sleek, nicely providing an updated look for the Stromtrooper armor without removing the familiar elements. It's a bit less bulky looking but crammed with more bells and whistles such as the data pads on the wrists, more elements on the belt, and the metal looking device on the helmet. Is this a voice amplifier or something? Kylo Ren looks to have one, too, so it'll be interesting to see what these are. 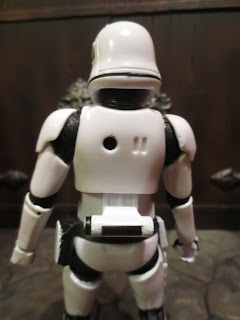 * Paint work is clean and crisp all over. There are lots of small details captured here and most of the paint lines seem quite clean and neat. I also really like how the First Order Stormtroopers have a variety of things on their belt. This one has the standard explosive device on his back as well as a variety of pouches on his left and right hips. Oh, and the classic doughnut and Twinkies are still present on the back of the armor! 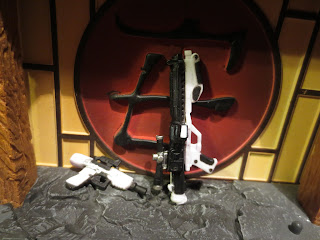 * Both of the First Order Stormtrooper's weapons are quite nice. I love the black and white paint job on these. The applications are clean and neat and the sculpts are fully detailed. These are some incredible looking accessories. 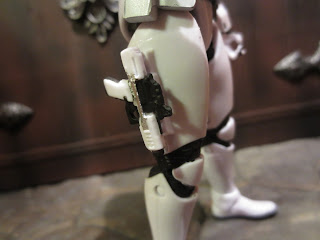 * One of my favorite things about this figure is that he has a slit on his right hip that allows either the smaller or larger blaster to slip inside. It stays fairly securely and looks really cool. I love interactive features like this on a toy and this absolutely escalates my opinion of this figure! 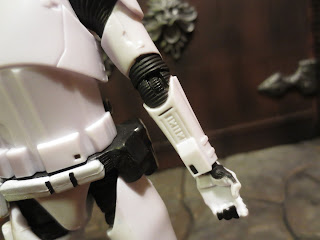 * The only negative I have about this figure is that his elbows aren't double jointed. The previous Stormtroopers from the Black Series have had double jointed elbows and they absolutely help in achieving better weapon holding poses. 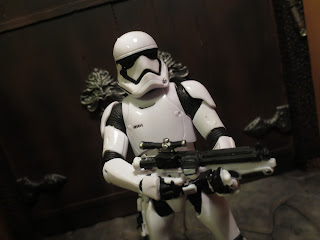 To me, this guy is clearly the winner from the first series of the Black Series Phase III. Everything just works so well together to create a fun, detailed figure. While the other characters such as Finn, Rey, and Kylo Ren might be more intriguing since we know so little about them (The Force Awakens cannot arrive soon enough!) I'm personally very curious to learn more about the First Order. This figure, however, is good no matter what and definitely earns an Epic rating from me. He's really impressive! Now I just need to find some of the series 2 figures!

I've also reviewed Kylo Ren from this same series, and plenty of other Star Wars figures: