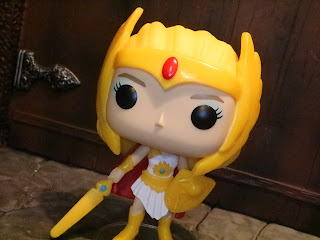 I've already looked at the POP! Pocket Keychain version of this She-Ra sculpt but today I'm checking out the actual POP! vinyl itself. She-Ra #38 is part of the recent POP! Retro Toys series and is inspired by the vintage Princess of Power She-Ra figure rather than than the Filmation cartoon depiction of the character. She-Ra #18 from POP! Television was released in 2013 and is one of the most expensive POP! vinyls out there. sadly, I don't have her so I was very excited to get a She-Ra for my MOTU POP! collection. I'm very perplexed as to why Funko never did any POP! vinyls from the Netflix series, as that seems like something that would have been right up their alley. Let's take a look at the toy based She-Ra we do have, however, after the break... 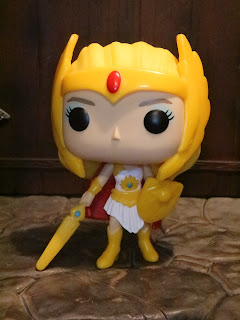 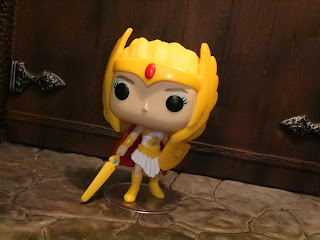 The Positives:
* Funko has definitely added a little bit of an action pose to She-Ra and it looks fantastic. With her right arm slanted down to hold out her sword and her head turned to the side a bit she looks ready to battle her way through the ranks of the Evil Horde! It's a great mixture of elegance and battle readiness. 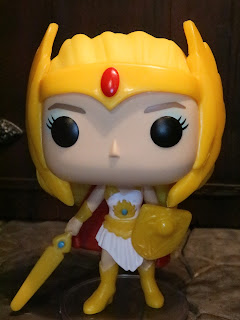 * So... which version of She-Ra is this? Well, the accessories and the asymmetrical details on her dress definitely point to this being based on the vintage toy but the tiara looks more like the Filmation version than any other, but it's not exact. In my opinion, this is a blend of different styles but you know what? I really like it! It's very vintage inspired but it takes some of the best elements from the Filmation costume, too. 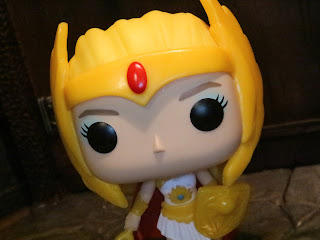 * She-Ra's headsculpt looks like a POP! She-Ra but it's the elaborate tiara that helps it stand out. It really looks like it might provide some protection as well as some style. 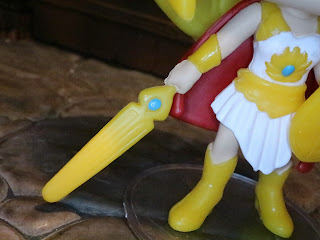 * She-Ra's sword is definitely based on the vintage toy, which had a very unique style. The blade has a bit of detail on and the Gem of Protection is painted. The blue gem is something the vintage toy didn't have (that's a Filmation detail) but it makes a wonderful addition. 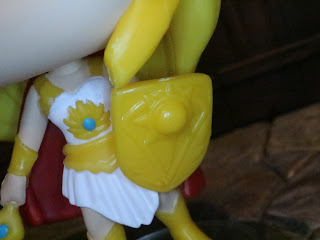 * The shield is also pure vintage. A little blue in the middle gem would have been cool but that isn't a detail the vintage She-Ra had, so I won't knock it too much. 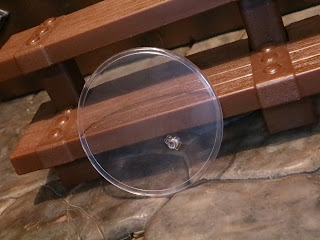 * While She-Ra stands OK on her own Funko did include a clear plastic stand. I kind of wish all POP! vinyls included stands to help them stay upright (even though they don't all need them). . 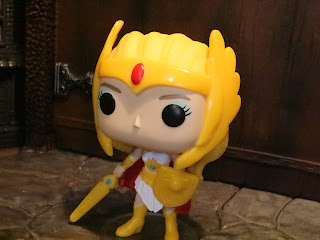 The Negatives:
* My only complaint is that it's really weird that Funko used yellow instead of gold for She-Ra's tiara, sword, shield, and boots. They use metallic paints on many figures, so it's not like it's something they don't do. The vintage figure also used metallic colors rather than flat colors, so it's not an accuracy thing. It looks kind of odd and makes her tiara kind of blend in with her hair which definitely hurts the coolness of the figure. 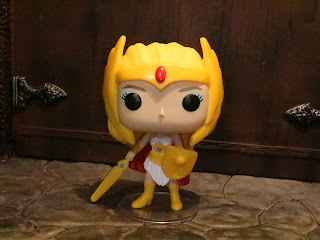