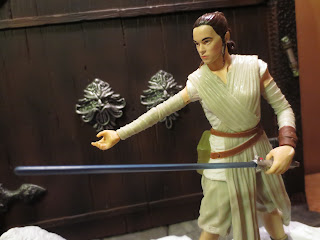 # Where's Rey? Here she is! While the whole "Where's Rey?" thing made major waves, it turned out to be a pretty uneducated and reactionary movement; The issue is that everyone was buying the Rey figures! The same thing happened with Captain Phasma, too. Heck, we could have said "Where are Force Awakens Toys?" in general as Hasbro seemed woefully unprepared for the release of the Force Awakens with a toyline that was too diverse in terms of scales and types of product offered while offering little depth. I will express some solidarity with the movement, though, in saying that I'm incredibly disappointed that Hasbro hasn't offered all of Rey's costumes in the 6 inch Black series yet. While she was one of the first five figures released in Phase III of the Black Series, she's the only main protagonist to not get a legitimate variant. Hasbro had better show off a Jakku Scavenger Rey and a Resistance Rey at SDCC or people will be pissed! Anyways, today I'm looking at a "variant" that's really just a fancy repaint: Rey from Starkiller base. The second figure in a K-Mart exclusive series of deluxe boxed figures, Rey connects with the earlier Kylo Ren (Starkiller Base) figure to reenact their duel on Starkiller Base. Remember when we all the second figure that would connect with Kylo Ren was going to be Finn? Anyways, this is a simple repaint of the first Rey figure with two diorama pieces and a repacked lightsaber. Is it worth it? Learn more after the break... 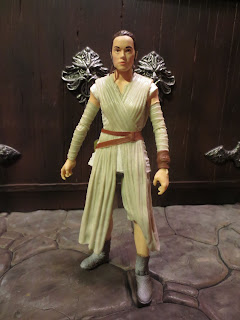 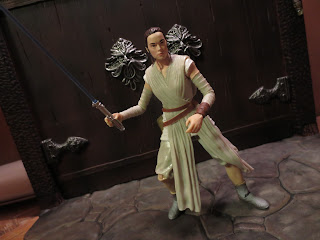 *This figure is really just a repaint with some new accessories. Fortunately, the base figure already had some pretty decent articulation. While Rey's lower body is hindered a bit by her robes, her articulation really isn't too bad. She has a good number of joints with a solid range of motion. She feels sturdy, too, so you can pose her to your hearts content with little fear of breakage. 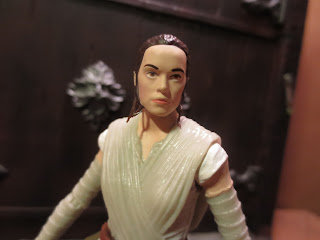 * As I've said, I'm pretty sure this is exactly the same sculpt as the Jakku version of Rey from last year. The only difference that I can see is that the face paint is much better on this version. It's amazing how a better paint job can bring out the best in a sculpt! Of course, Hasbro did re-release a few of the earlier Phase III figures like Rey and Kylo Ren with better paint jobs, so this might be exactly the same as the re-released Rey. 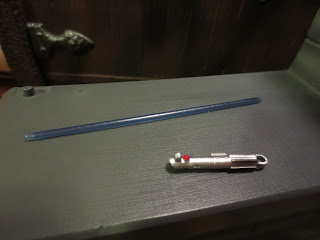 * Rey comes with the famous Anakin Skywalker lightsaber! We've seen this piece with a few other figures in this line, but it's an acceptable reuse. It's pretty cool to see a 6 inch Rey figure wielding this piece. It's as nice as any of the previous versions of this accessory and features the same removable blade. 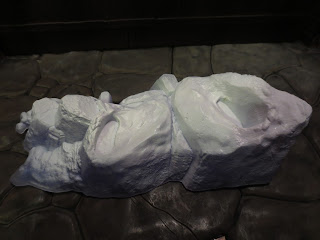 * Rey comes with two display pieces representing the surface of Starkiller Base. The first piece is a rocky outcropping covered in snow with depressions for Rey's feet. The paint work on this is really outstanding. It kind of reminds me of the mountains from the snow themed Heroscape set Thaelenk Tundra for some reason. 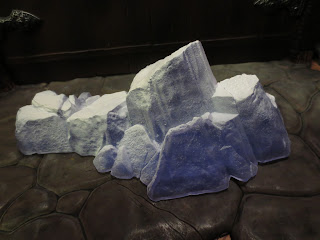 * The second display piece that Rey comes with is a frost covered pile of chunks of ice. Seriously, this kind of looks like some broken off pieces of a glacier due to the cool, translucent effect of the rocks. Both of these are quality display pieces and definitely look far more detailed than what we typically see from Hasbro. I mean, they don't exactly look like the snowy forest on Starkiller Base but they still are quite cool. 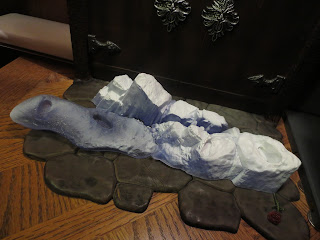 * And here are Rey's two pieces of Starkiller Base connected with Kylo Ren's piece. The bases connect easily and actually stay together quite well. It does make for some cool scenery and looks great. I'd love to see Hasbro offer a few more sets like this to get some cool Star Wars scenes out there. A Vader and Luke on Cloud City would be a great way to refresh those figures/ characters and recreate another amazing Star Wars battle. 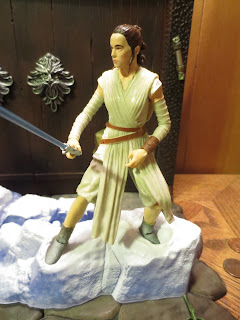 *The snowy Starkiller Base base (yeesh, that's redundant) has some indentations from Rey's boots that help the figure to stand quite nicely. Rey does look quite nice posed in this base and whether you have her alone or pair her with the Kylo Ren figure that K-Mart also carries, you're getting a figure with a great dioramic quality to it. 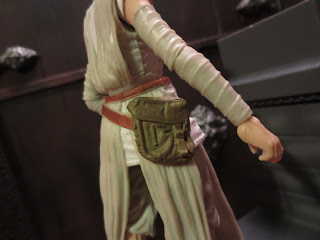 * I was super excited when the early K-Mart solicitations for this figure stated that Rey came with a blaster pistol. I love the NN-14 blaster that Han Solo gives to Rey on Takodana and this would have been a cool place to get that accessory. Remember that the K-Mart exclusive Kylo Ren came with some unique extra accessories, too. Sadly, the blaster became MIA. Hopefully we'll get it someday with a Resistance costumed Rey. 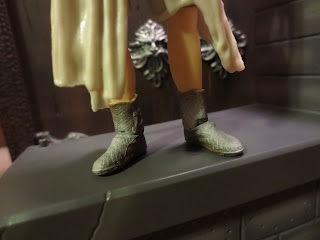 * Ultimately, this figure is Rey with snowy boots. That's it. She's nearly the same figure we received last year. Maybe this is less of a complaint about the figure itself, but for a character who has quickly jumped up into the upper echelons of Star Wars favorites, Hasbro really should have tried to do something to help her stand out a bit more. She doesn't feel like she's adding much to the line if you already have the Jakku Rey. Maybe if we already had a resistance Rey and a Jakku Scavenger Rey in the Black Series, I'd be a bit more accepting of this minor variant. 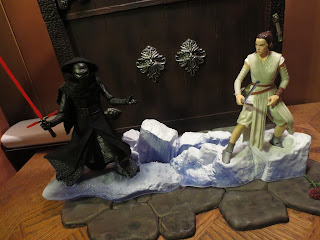 While she doesn't come with BB-8, this is still a good Rey figure. Of course, if you're not concerned with the Starkiller Base you're simply getting a Rey figure with some snow speckled boots and a repackaged lightsaber that has come with at least five other figures. The better paint on the face and the diorama pieces really make the set although Rey doesn't feel like as much of an improvement over the first figure as the Starkiller Base Kylo Ren was over the basic Kylo. She's still pretty good, but a new accessory like her blaster would have really made this feel like something special. She gets a Good and a 1/2 from me as someone who owns the previous figure. If this is your first Rey, though, she'd easily score higher, probably a Great or Great and a 1/2.  Now Hasbro needs to bring on her cool Jakku Scavenger outfit and her Resistance outfit (the outfit she wears at the end of the film). This is the last currently scheduled 6-inch Black Series figure that we know about from Episode VII so I'm really hoping that Hasbro continues to visit the Force Awakens as their are still a number of characters I'd love to see.


The only other Rey figure I've reviewed is the Jakku version of Rey from last year. Of course, I've also reviewed the counterpart to this figure, Kylo Ren (Starkiller Base) and plenty of other Black Series figures, including: