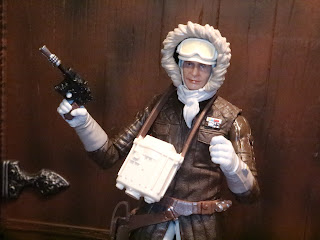 I will give Hasbro a lot of credit for how they've handled The Black Series  Archive line as it's been a great way to get highly desirable and pricey figures back into the hands of collectors. Most figures have a few changes as well so they're sometimes even worth picking up for those of us who have the original releases. That's why I grabbed Han Solo in his Hoth gear: Not only does he have the updated face printing but Hasbro actually changed the color of his coat from the previous release that came with the tauntaun. And if for some reason you've been living under a glacier for the past 40 years, yeah, the color of Han Solo's coat is a big deal. Long story short, the coat Han Solo wore in The Empire Strikes Back was brown but the lighting of the film made it blue (kind of like the Xenomorphs in Aliens). The vintage Kenner figure went with the blue color scheme so anyone who had that toy as a kid had that image burned into their memory. It wasn't until Kenner's POTF2 toyline that Han was released with a brown coat which seemed inaccurate at the time. It's a tricky issue but now, with the newest series of the Archive collection, Hasbro has given collectors both options. This guy is starting to show up on store shelves along with Luke Skywalker in Hoth Gear, Grand Admiral Thrawn, and Commander Cody. Ready to check out this newest version of Han Solo? Then join me after the break... 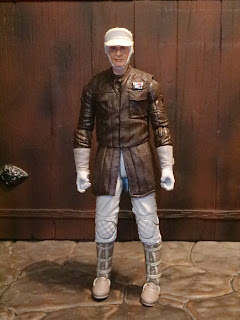 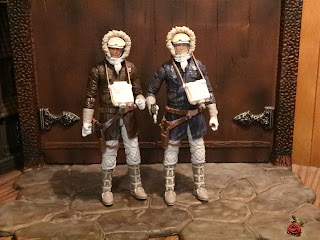 Comparison:
* The new brown coated Archive series Han Solo is on the left while the Phase II Han Solo that was packaged with the tauntaun is on the right. Other than the differently colored jackets and the face printing of the new figure, they're the same figure. That's the point of the Archive series, though, so what did you expect? 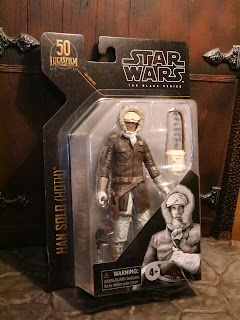 The Packaging:
* Rather than come in boxes the Archive series figures come on blister cards. The card has changed up a but since the last series and they now have some more gold on them along with a logo celebrating 50 years of Lucasfilm. 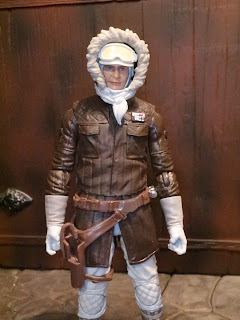 The Positives:
* This is an older sculpt but it still checks out. While the articulation, paintwork, and the headsculpts have radically improved in the Black Series over the past few years the sculpts of most costumes and armor have always been pretty good, so I'm not sure that someone who didn't know better would recognize that this sculpt is from 2015. The paintwork is solid and the costume is quite accurate and appropriately bulky (you can't survive the icy weather of Hoth in just jeans and a snappy vest). 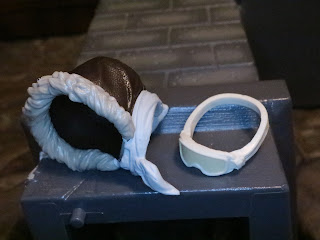 * Han has a lot of removable parts, including his hood and scarf combo and his goggles. They definitely add to the bulky, bundled up look of the figure and give you a few different display options as well. The goggles are solid and sturdy while the hood is a bit rubbery, allowing you to fit it over Han's helmet. 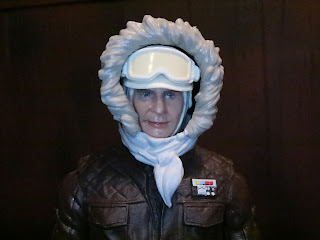 * With all of his gear on and with the new faceprintng technology Han looks pretty good. It's not the best Harrison Ford likeness we've seen in the line yet but it's still quite adequate. The face that the hood and the goggles are separate definitely adds a bit of complexity to the overall look of the portrait, too. There's a lot going on here for sure. 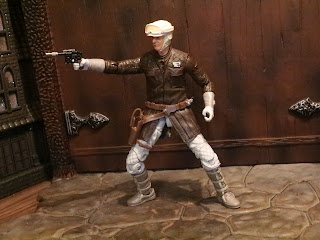 * Despite his bulky Hoth gear Han Solo is still quite well articulated. He's an older figure and is lacking some of the newer joints but, overall, it's not too bad. He's sturdy and fun to pose. Go show those Probe Droids whose boss, Han! 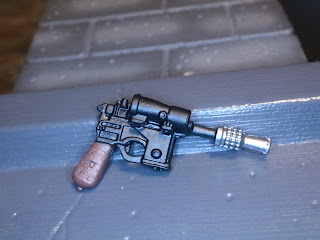 * Han comes toting his DL-44 which has a nice sculpt and excellent pant applications. 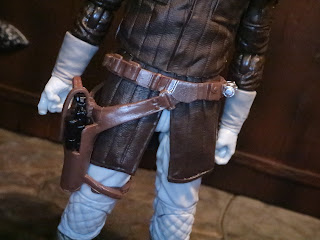 * The DL-44 can fit perfectly into Han's holster. The belt and holster are actually a completely removable piece and while you might not want to remove it on Han (it covers up the division between the top and bottom of his coat) it does allow clever customizers to use this body to make some more generic Hoth Rebel troopers. 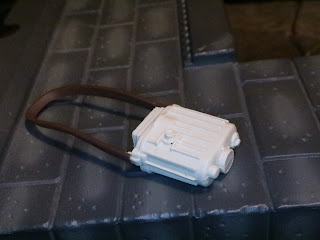 *  I'm glad that Han includes his macrobinoculars. They're a bit plain but the sculpt is nice and they can be worn around his neck or over his shoulder. Extra prop items like this are always a plus and I was a bit worried that Hasbro was going to leave them out of this release, perhaps considering them as part of the tauntaun. 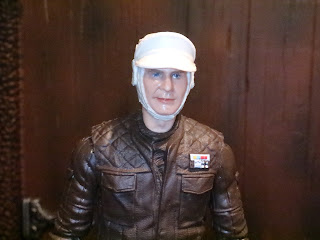 The Negatives:
* Without his hood and goggles on Han looks kind of odd, doesn't he? He's got a undersized head and a bit of a giraffe neck. I had the same problem with the original figure and I still think Hasbro should have done swappable portraits for this figure. 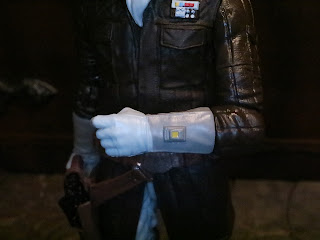 * Han only has swivel forearms rather than swivel/hinge wrists. Missing this joint isn't the end of the world but it was an odd choice for Hasbro to make. It does make posing him with his blaster a bit more difficult. 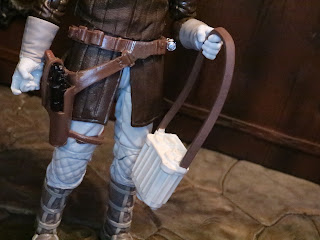 * The macrobinoculars are cool but they're so large that Han can't hold them in his hands. They're really just intended to hang around his neck but the strap so so rigid that they hang out at a weird angle. 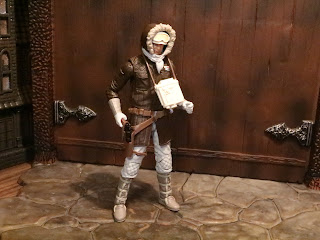 If you're just standing Han Solo on the shelf then he's not a bad figure at all. The brown coat looks nice and everything just looks a bit sharper overall than the original release from 2015 did. The figure has some weird little quirks, though, like the unusable macrobincoulars and the awkward head when you don't have him fully bundled up that keep him from being perfect. I honestly wouldn't have minded a full on redo of this figure but this one isn't bad and now that he's widely available it'll probably be some time before we get a full update. He's a Good and a 1/2 figure and he certainly goes well with the rest of the Hoth rebels that Hasbro has released over the past couple of years.
I've reviewed so many Han Solo action figures that he has his own review archive. Check out The Kessel Run for 12 parsecs worth of Han Solo reviews.
For more figures from Star Wars: The Black Series Archive check out the following:
Anakin Skywalker