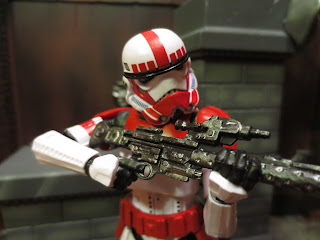 In November of 2015 Hasbro released an exclusive figure to Wal-Mart stores to commemorate the release of the videogame Star Wars Battlefront: The Imperial Shock Trooper. Based off of the Shock Troopers in Revenge of the Sith, the Imperial Shock Trooper depicted here and in the game wears the familiar Original Trilogy Stormtrooper armor with a wicked new paint job. Actually, that's a pretty good summation of what this figure is, too: A simple repaint of the original Black Series Stormtrooper from 2014. Since I've reviewed that figure already, this is going to be a shorter review. Since the various armored troops are my favorite Star Wars things to collect in action figure form I've been picking them all up in the Black Series. I received this guy as a Christmas gift from my parents and thus he's getting a review as part of my Christmas Haul 2015. Ready for a closer look? Then join me after the break... 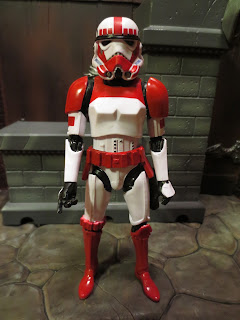 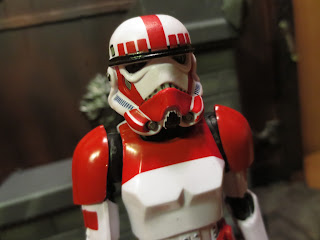 * The blood red paint job is what separates the Imperial Shock Trooper from the basic Stromtrooper. Since the paint job is the selling factor for this guy it's definitely important that it turned out so well. I love the paint job here. It's neat, clean, and really quite vivid. This is an incredible looking figure and honestly makes me hopeful that we'll see a few more Stormtrooper repaints down the line with some unique squadron colors. 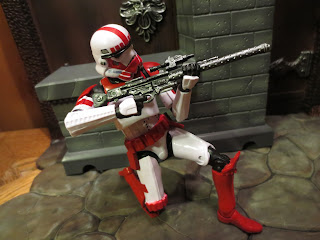 *The basic Stormtrooper figure had some excellent articulation but his joints were rubbery. This guy has that same great articulation but much sturdier joints. I love playing around with this figure and finding cool poses for him. Grab a bunch of different weapons from other Black Series figures and just have a blast posing this guy holding them. Just don't expect him to hit anything. 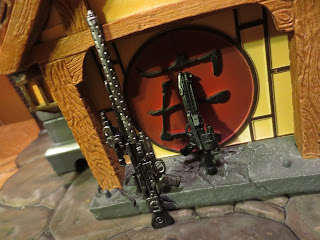 * The Imperial Shock Trooper comes with the same two weapons that all of the previous Stormtrooper figures have come with: A BlasTech E-11 blaster rifle and the BlasTech DLT-20A, (the longer rifle). They're both nice looking weapons and I love the weathered look of the DLT-20A as it has a great silver dry-brush effect but I'd really love to see another weapon start being used other than the DLT-20A. 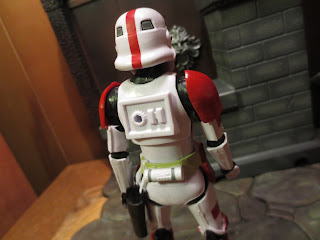 * Here's a simple rear shot so you can see all of the great detail that the original Stormtrooper figure had is still here such as the ports on his back and the functioning holster. 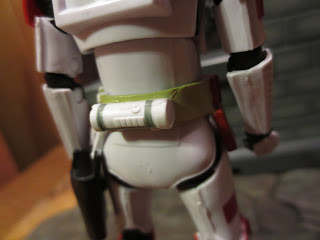 
* The only complaint I can think of with this figure is that his belt is yellowish. For the Shock Trooper something black or red would have probably looked better, although this might actually be more accurate to the in-game models. 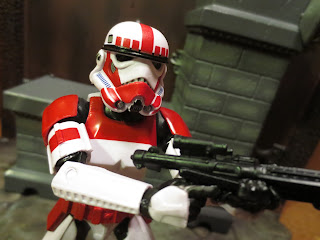 I'm really surprised by how much the paint scheme on this guy really makes him feel like a fresh, new figure. Even though I've purchased this exact same sculpt a few times now, a fresh coat of paint and some tighter joints really do wonders for it. Star Wars Black exclusives have either been very easy to find or notoriously difficult, and this guy seems to be leaning on the harder to find side. If you're interested, you might do well to pick him up sooner rather than later as he's still a Great figure. 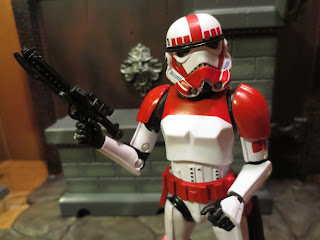 I've reviewed a bunch of other Black Series figures, including: