Road to Rogue One: C-3PO (Resistance Base) from Star Wars: The Black Series Phase III by Hasbro 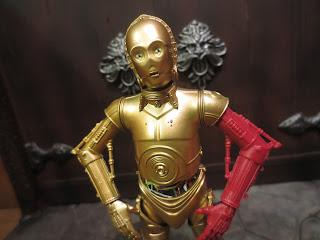 You might not recognize this figure due to the red arm, but this is C-3PO! I'm really not sure why Hasbro didn't make more of a effort to release a mixture of classic characters in their newer looks last year when The Force Awakens was the most popular thing in the universe, but the fact that we now have a new C-3PO begins to rectify things. C-3PO (Resistance Base) is the first C-3PO in the Black Series, meaning it's taken over 3 years between the release of R2-D2 and C-3PO. There is also a Walgreens' exclusive classic C-3PO that's starting to hit shelves now too (review coming in a couple of weeks), so you can have your pick. Or buy both. Whether you call him Goldenrod, the Professor, Threepio, or any other nickname, you'll be glad to have this guy as a permanent resident on your shelf. More details after the break... 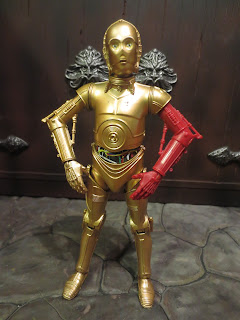 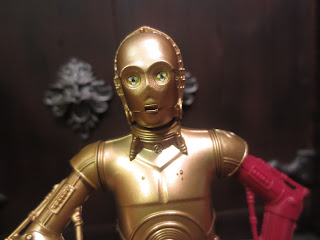 * Just looking at this figure, I'm impressed by how well Hasbro captured C-3PO's appearance. The shape and texture of the droid just seems perfect, as do the eyes and mouth. I love how the eyes have been captured! Easily one of the best nonhuman portraits in the line. 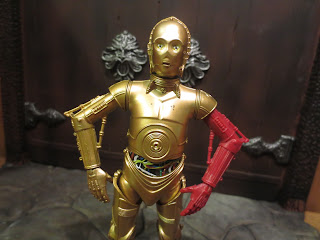 * The shape and details on C-3PO's body are just dead on. Everything looks right and the sculpt is very crisp. Honestly, you could almost believe that there is a little Anthony Daniels action figure inside of the shell. 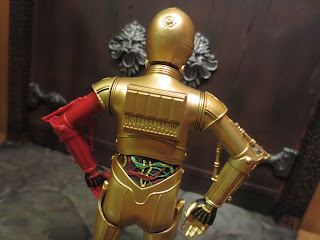 * I'm really liking the paint color Hasbro went with for C-3PO's gold body. I'm rarely a fan of vac-metal and while I no some people like it, to my eyes it always looks cheap and out of place. This gold just looks so good. Honestly, C-3PO might be one of the most eye-catching figures in the Black Series to date. He really stands out on the shelf. 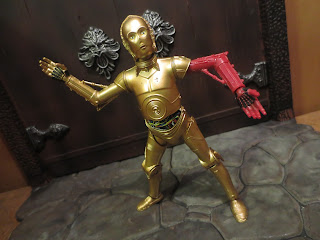 * When you think of C-3PO, you don't really think of articulation, do you? Still, this version of C-3PO can move very well. His joints are a bit stiff, but that's by design: He really moves much like how you'd imagine Threepio would be actually capable of moving if he had the desire. The elbows are permanently posed, which makes sense, but everything else (especially the head and the mid-torso joint) has a great range of motion. 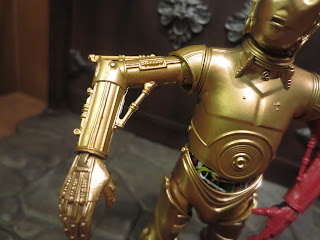 * Here's a close-up of C-3PO's arm. His hands look great, I love the pistons on his elbows (even though they don't move), and the shoulders look great. The shoulders actually have a cover over the swivel/hinge joint that swivels itself, hiding the joint in most poses. It's a great feature that preserves both form and functionality. Nice engineering; sometimes something so simple like this just helps to greatly improve the figure! 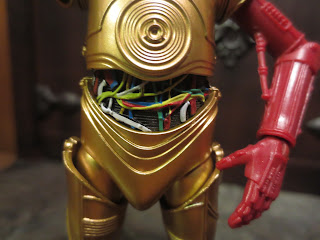 * The paintwork on the wires in C-3PO's midsection is pretty good. In person it looks even better, as the photo is a bit larger than the figure itself. The paintwork is quite clean and it makes for a convincing effect. This kind of makes me interested in someday seeing an unfinished C-3PO from Episode I. 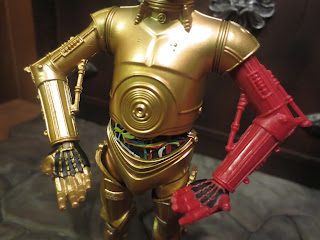 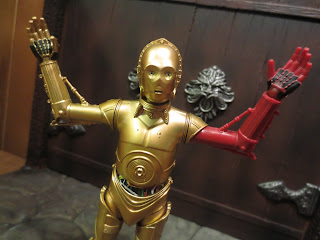 I really like this figure, probably even more than I was expecting. This is the first figure I've looked at from Series 8 of Phase III of the Black Series (which only included three new figures) but it's a good one. While I know that everyone is kind of collectively wondering why Hasbro made the classic C-3PO the exclusive and left the TFA version as the standard retail option, you can't say that this is a bad figure. Great sculpt, solid paint, fun articulation and, Heck, he even speaks Bocce! Great and a 1/2!

If you're looking for other figures from Star Wars: The Black Series Phase III, check out the following: