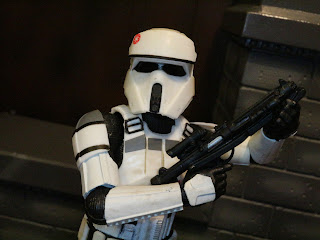 Hasbro has a great showing for Star Wars: The Black Series last weekend at Celebration, something that was desperately needed as the line has had some fans concerned. While we have some great things to look forward we're currently seeing a mixture of cool stuff and some pretty simple repaints/ repackages. Today's review is one of those simpler repaints that is currently a Target exclusive: The AT-ACT Driver. I haven't picked up Rogue One on Blu-Ray yet, but from everything I've read and everything I can recall from seeing it in theaters, the AT-ACT Driver doesn't actually appear in the film. The AT-ACTs certainly do, but I just don't think the driver was actually shown. There's a small image of the helmet in the Visual Guide, so the character certainly does seem to be something legitimately from the film. He's a creative mixture of two different previously released figures but that seems pretty accurate to the source. He was pretty easy to find, unlike some of the other Black Series exclusives. Let's take a closer look at him after the break... 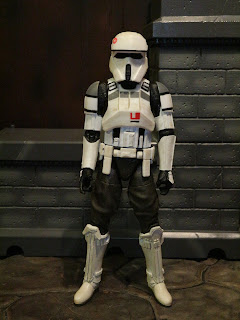 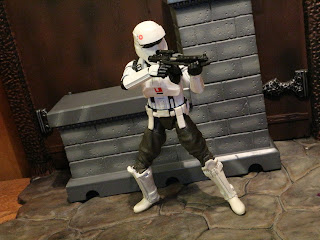 * Made up of parts from the body of the Hovertank Pilot and the Scarif Stormtroopers,  the AT-SCT Driver has the same excellent articulation those figure had. He's a very high quality figure that very fun to pick up and play with as he just moves extremely well and looks incredible in firing positions. 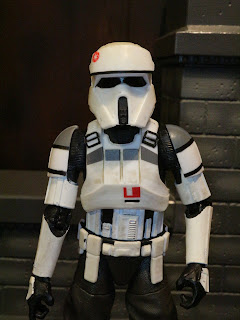 * The upper body of the AT-ACT Driver is taken from the Scarif Stormtroopers while the lower torso is shared with the Hovertank Pilot. Both of the "donor" figures are excellent so there's really nothing to complain about here sculpt wise. The paint work is also pretty slick. It's not overly flashy or anything but it definitely fits in with the vibe of the Imperial armor worn during the Galactic Civil War. There's also some excellent weathering on the armor, too. 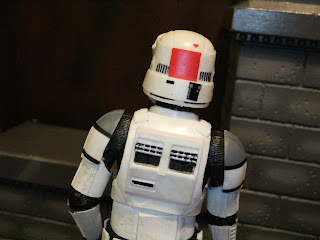 * On the back of the helmet and armor are some further painted details that add some uniqueness to the armor. 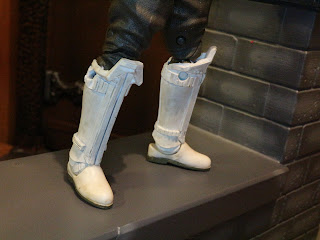 * The boots are also extremely well weathered. I'm really digging the paint applications on this figure as they definitely help to add some character to the figure. 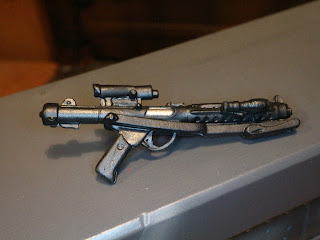 * The AT-ACT Driver comes equipped a little bit lightly, but I'm never one to turn down a BlasTech E-11. What's cool is that not only is this a new sculpt but it features some sort of sensor or target designator on the barrel like most of the other Rogue One figures. It also has some excellent paint applications on it. 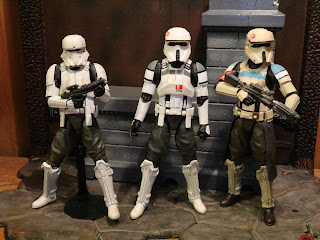 * Considering that this figure contains no new parts, it is a bit difficult to get incredibly ecstatic over it. I'm definitely enjoying the figure but it would have been nice to have had another accessory (the Visual Guide says these guys use both E-11s and E-22s) or so. 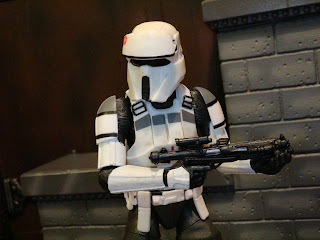 The AT-ACT Driver is a solid, well made figure with some nice paint applications. He's a nice exclusive as he's a figure I doubt anyone will feel too terrible about missing but he's still a welcome addition to a collection of Imperials. I do wish he had something a bit more unique about him, though. The AT-ACT Driver is a Good and a 1/2 figure who definitely won't appeal to everyone, but completests and troop builders should enjoy having him.


I haven't reviewed any other AT-ACT Driver toys but I have reviewed two sets that included AT-ACTs: The Micro Machines Assault on Scarif set and the Fight the Imperial Might set.