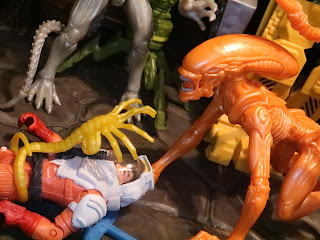 It's time to start going through my 2020 Christmas Haul and I'm kicking things off with the Alien Super Set by Lanard Toys. If you can remember back to January of this year I was really excited about Lanard's Alien Collection, a line of budget Aliens action figures exclusively sold through Walmart that offer some some pieces that are fairly compatible with Kenner's Aliens/ Predator line, AKA one of my favorite toy lines of all time. Usually around Christmas-time big retailers get some budget conscious boxed sets of toys that give folks a chance to purchase something with some wow factor. These kind of things often have some real stinkers and dollar store quality to them but Lanard's Alien Super Set is pretty nice. There aren't any new sculpts in this box but the three Xenomorphs included with the set are offered in new colors which is the big draw. Also, I was pretty excited to add another egg, facehugger, and sentry gun to my Kenner display. For the asking price of $20 bucks for this set you're getting 6 articulated figures, a Power Loader, a sentry gun, and the egg and facehugger. That's not bad! I almost skipped this due to the lack of nothing new but I ended up putting it on my list and I'm glad I did. For the price, this set is crazy awesome! I'm not going to get into each figure here as I've reviewed them all, but I will direct you to all of the previous reviews. The package is divided into three sets, one from each of the first three Alien films. Let's take a look at this massive set after the break... 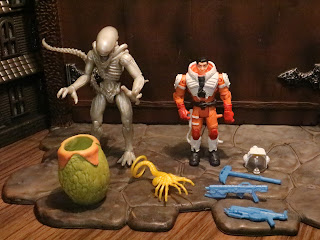 All of the items from this set except for two of the weapons appeared in the Colonial Marines 'vs" Aliens set with the gold Xenomorph. 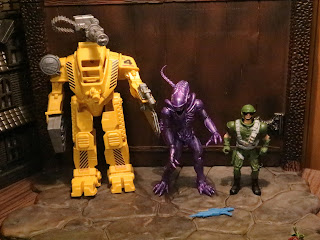 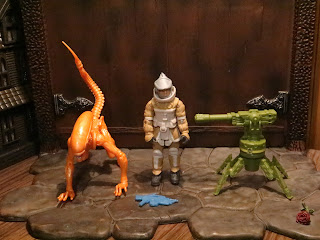 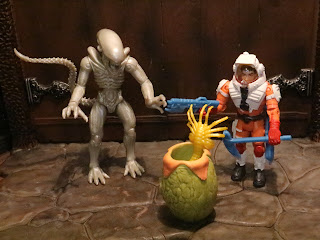 The Alien set is pretty desirable for a Kenner Collector. The Research Scientist is not too thrilling but the Silver Xenomorph Drone and the egg with facehugger are both excellent. While the colors are very "toyish" they do fit in with the Kenner line and are just fine pieces. Considering the price on these, I'm definitely down with them. The Xenomorph looks fantastic in silver! I hope that at some point we get him in black, too. 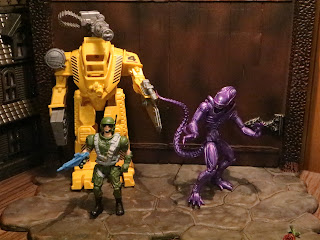 The Aliens set is the worst set with the best figure. The Power Loader is a reused vehicle from The Corps and while it's OK the Colonial Marine is laughably bad. That being said, the purple Xenomorph is amazing. Seriously, if the figure has a ink wash or some dry brushing that guy would be simply amazing. He's still pretty good, though. This set definitely highlights the best and worst of this line for sure. 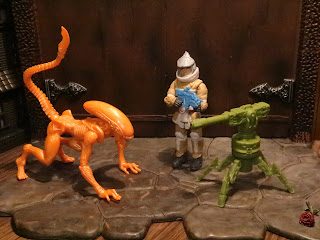 The Alien 3 set is solid. Very solid all around, in fact. The sentry gun is simple but makes a great accessory for the Kenner and the Weyland Commando almost could fit in with the Kenner line. The Runner Alien (similar to the dog Alien) is quite nice and looks really good in orange. 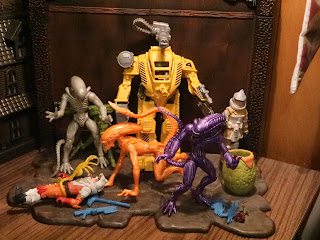 What's the verdict? Well, you're getting quite a bit here for $20 bucks. Unless you're a rabid fan looking to add to your Kenner collection this might not be worth a buy if you have the previous sets but for those that don't, there's a lot to love here.
Considering all the positives (cool Aliens, the egg and facehugger, nice weapons, the drone gun) and the negatives (inconsistent scale and quality with the human figures) I have no qualms with giving this set a Great review. If you were buying one $20 gift for a kid who loved action figures this isn't a bad pick at all. As a Kenner Alien/ Predator fan, there's a lot to love here as well.

I've reviewed so many different Xenomorphs that they've got their own review archive. Check out LV-426 for all of the Xenomorph and Facehugger reviews you could want!