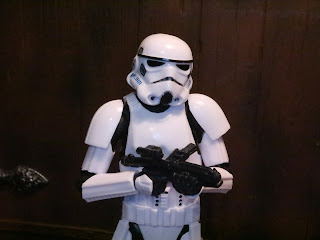 After 6-7 years Hasbro has finally upgraded the Imperial Stormtrooper for the Black Series. The original Stormtrooper came out in early 2014 and was a rather impressive figure for the time but over the years the articulation has began to feel outdated and the mold used is showing its age. Hasbro seems to have taken the sculpt and design for the 1/18th scaled Rogue One Stormtrooper and used it as the basis for this new Stormtrooper in Phase IV. While they have attributed the figure to The Mandalorian, the version o the E-11 used here definitely gives away this trooper's ties to Rogue One. He's been a tougher figure to find but I stumbled upon one about a month ago and I'm finally getting around to checking him out. Ready for an updated Imperial Stormtrooper for your army building? Then join me after the break... 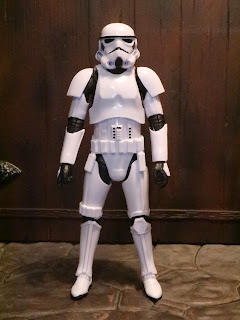 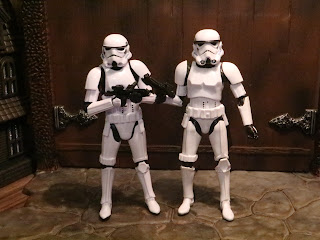 The Positives:
* This updated Stormtrooper has already been used as the base body for another figure, the Incinerator Trooper, so it's not new to me but I really do like seeing this new sculpt in the basic black and white. The figure looks fantastic and new features like the more flexible shoulder armor and the way the chest armor actually sets over a base body definitely make this guy feel much more realistic than the previous release. He's just a really fun, striking figure. 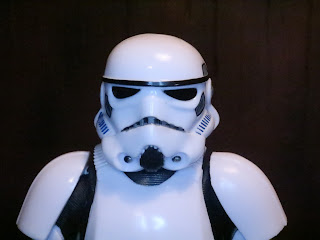 * The helmet is also quite slick. It's a different sculpt and is a bit smaller than the previous helmet (maybe a tad too small?) but with much improved articulation. There's now a ball jointed head and a ball joint at the base of the neck. Everything is neat and clean here, giving this guy a truly menacing countenance. 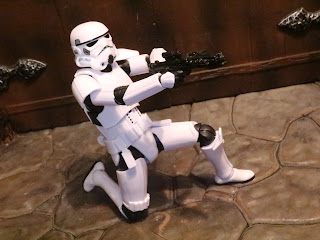 *  The new Phase IV Stormtrooper gets rid of the double hinged knees and elbows but since the range of motion on the new knees and elbows is so much better you won't miss them. The plastic is sturdy and now at all rubbery. The articulation on the head and neck are incredible as are the "butterfly" shoulder joints. This guy looks amazing holding his blaster in multiple different poses! He's really, really fun. 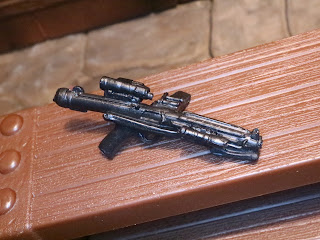 * The Stormtrooper's connection to Rogue One is his E-111. It's a new sculpt of the E-11 that features the side sensor or target designator on the barrel and a loner charging port. Lots of the Rogue One figures had these accoutrements and this guy does, too. It's a solid black blaster, though, with no paint hits. 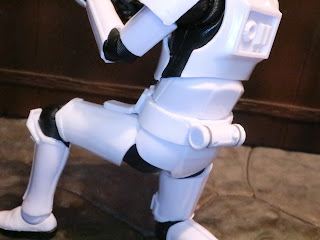 * On the back you've got all of the little extras you would expect: The backpack with the Twinkies and donut and the N-20 Baradium-core thermal detonator.
Just a note:  It's really weird that the Stormtrooper is missing his holster, isn't it? That's been a key part of most modern Stormtroopers (and all of them in the Black Series) but, sure enough, the Rogue One Stormtroopers don't have them and the troopers from The Mandalorian don't seem to have them, either, so this is accurate. 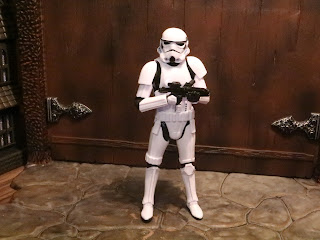 It's nice to see Hasbro update the standard Imperial Stormtrooper after so long. This is a Great new version of the trooper and I can't imagine anyone being too disappointed with it. The only thing I wish he included was another weapon or two. There are multiple rifles the Stormtroopers use and just giving him one standard weapon seems a bit cheap. I doubt that will keep anyone from picking him up, though. We'll probably see this figure redone multiple times in the future but this is the basic Stormtrooper and seems to be quite popular.