Christmas Haul 2020: Jake "The Snake" Roberts from Masters of the WWE Universe by Mattel 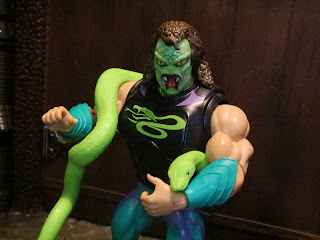 It's time for another item from my 2020 Christmas haul and this time it's Jake "The Snake" Roberts from Mattel's Masters of the WWE Universe line! Jake "The Snake" Roberts is a fantastic wrestling legend for introducing the Snake Men into the Masters of the WWE Universe line and blending together Roberts' wrestling persona with some of the gimmick from the vintage King Hiss figure has lead to one of the best figures in the line yet. Man, series 4 of this line is just so darn good for the most part, isn't it? Let's take a look at the Evil Purveyor of Poison after the break... 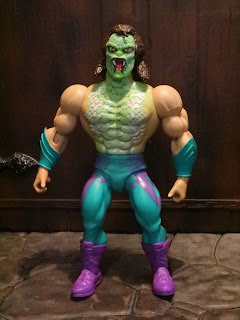 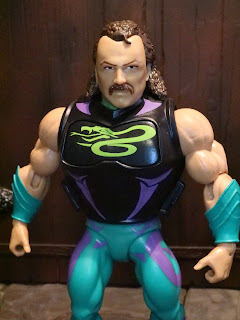 * Like the vintage King Hiss figure, Jake "The Snake" Roberts doesn't initially appear as menacing as he truly is underneath his disguise. He's wearing some incredible black and purple battle armor with the Snake Men logo on it. The armor is two pieces (front and back) and the Snake Men logo can pop out, although there's nothing to swap it with. Other than that, he looks like your typical 1980s wrestler. Well, he does have armored gauntlets, too, but otherwise he's just a guy, right? 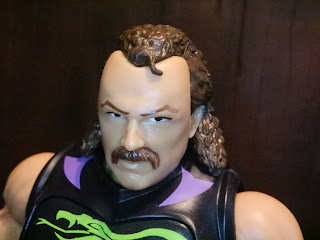 * The likeness is pretty good to Roberts and looks pretty intimidating. The face might be caricatured a but but the glare and the hair is dead on. 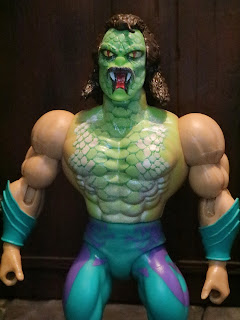 * Like the vintage King Hiss, Jake "The Snake" Roberts' exterior appearance is just a facade! Underneath lies a terrifying Snake Man ready to poison his opponents! Yes, remove the battle armor and you can see this awesome scaly paint job that covers his chest! 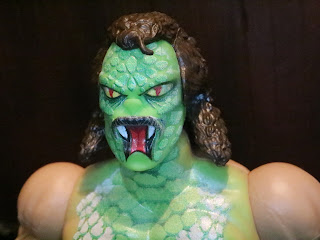 * Jake's face is also a ruse! It's a mask that pops off to reveal a terrifying, snaky visage! This is pretty creepy, right? He'll be right at home with the rest of your Snake Men! 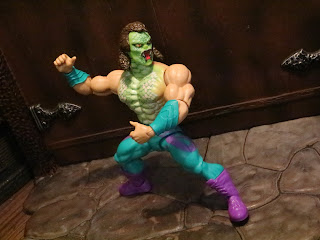 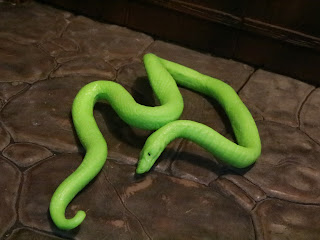 * Jake "The Snake" also comes with his python, Damien!  He's pretty cool, fairly rubbery, and can wrap around Jake in multiple ways! 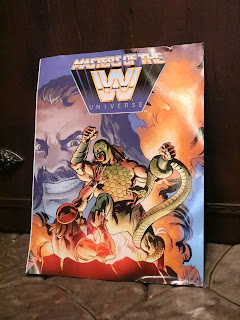 * Behind each standard MOTWWEU release is a minicomic of sorts. It's only 4 pages (cover, bio, comic, and back page with cross sell art) but it looks cool and does offer some cool information on the role of Jake "The Snake" Roberts in WWEternia. The art is very reminiscent of the vintage MOTU minicomics and you get a short comic of Jake "The Snake" turning on the Skull King. 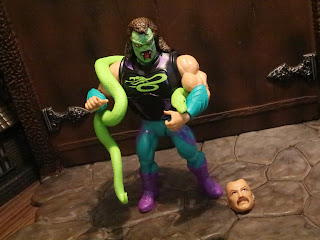 Another Epic figure in this series? Yes indeed! While Jake "The Snake" Roberts' hair is very un- MOTUish the rest of the figure is an awesome tribute to the Snake Men! This guy is loaded with cool MOTU references and is really just a fun figure. I've always loved figures that had a disguise component and Jake "The Snake" is one of the coolest in recent memory! I'm a big fan of this one and he's well worth tracking down. I hope we get the Snake Men represented in MOTU Origins as well, as they tend to get neglected in many MOTU lines. This gives me some hope they won't be neglected in Origins.

Are you looking for more of Jake "The Snake" Roberts? The check out my review of the Super7 WWE M.U.S.C.L.E. set with Jake Roberts, Ultimate Warrior, & Junkyard Dog.