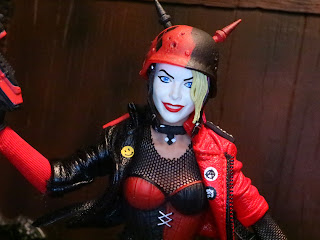 Last month I reviewed the traditional Harley Quinn figure from Mezco's One:12 Collective line and today I'm reviewing the Previews exclusive Harley Quinn: Playing for Keeps Edition figure. This version of Harley Quinn seems to be a Mezco original design that is intended as a companion piece to Mezco's Joker: Clown Prince of Crime figure. It's a much more modern look for Harley that takes into account elements of other outfits she has worn within the last decade or so, including her Arkham City outfit and her roller derby outfits from the New 52 era Harley Quinn comic series. Over the past couple years I've definitely narrowed my DC Collecting to just picking up the Mattel era stuff (DCUC, Multiverse, etc.) so now that they no longer have the license I've just picked up older figures here and there. I've also sold off most of my DC and Marvel Mezco One:12 Collective figures but Harley's a special case, so I picked up both of them. I liked the standard Harley Quinn but there were definitely some areas where I was a bit unimpressed with her. How does this version fare? Read on after the break to find out... 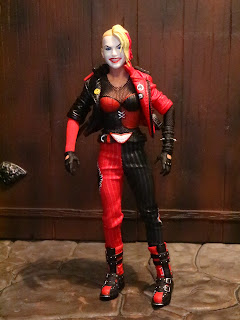 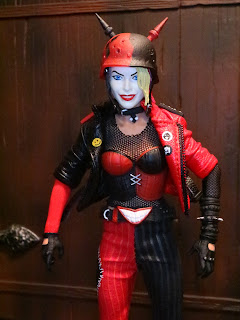 * I tend to think Mezco's One:12 Collective figures work best when they're wearing less typical superhero outfits and more real world stuff like jackets, combat pants, etc. Unlike the previous Harley in her jester costume this version of Dr. Quinzel uses those real world elements and just looks better. The seams are less noticeable and the quality seems way better. Harley is decked out in pinstriped pants, a mess shirt, a corset, and a leather jacket. It's quite an outfit and the variety of different materials used here really makes takes advantage of the soft goods that the One:12 Collective line is famous for. The only sculpted clothing element is the corset which seems to be permanently attached over the torso. It all looks fantastic, though, and really makes for an impressive looking figure. 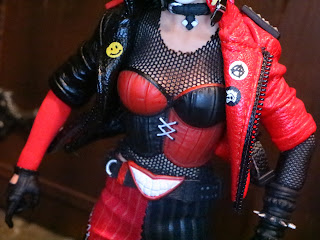 * There are a lot of cool details on this figure. The mesh shirt is really well done in this scale, as is the lather jacket. I love the little buttons on it. They're simply printed on the pleather but the effect is convincing and it really works. Harley's also sporting a big ol' smiley face belt buckle. Maybe it was a gift from her puddin'? 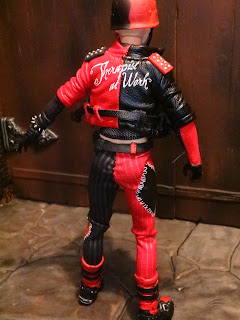 * Flip the leather jacket around and you can see the studded shoulder pads and the words "Therapist at Work" across the back. That's quite funny, actually. Also, the pants are wonderfully done. They're perfectly tailored and have some really cool diamond shaped patches on them, tying this version of Harley in with her original costume. 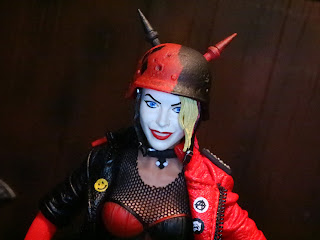 * This version of Harley Quinn only comes with two headsculpts (the standard version comes with three) and this one with Harley sporting her armored helmet is my favorite. It's a combat helmet adorned with two fairly large spikes and some painted on diamonds. It looks like something you'd see someone wearing in Mad Max or perhaps even by a gang member in The Warriors. Heck, I could see Tank Girl wearing something like this, too. It's quite unique for Harley and it really stands out. Plus, the face sculpt is gorgeous. I love her smile and her eyes! 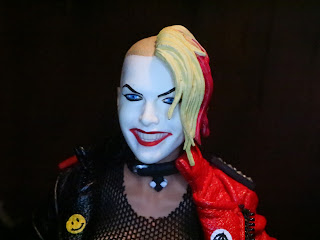 * The second headsculpt is my least favorite of the two. I like the face though this is a way more disturbing expression for Harley, though I do admit I tend to prefer the more modern "antihero" version of Harley over portrayals of her where she's just as bad as the Joker. Still, nice work on the face, especially considering she's just a little over 6 inches, and on the strands of hair on the side of her head. 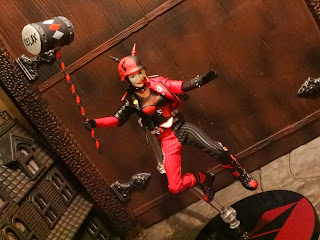 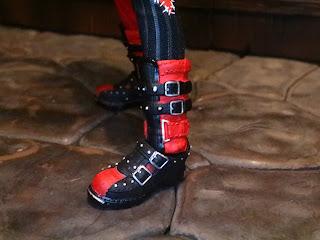 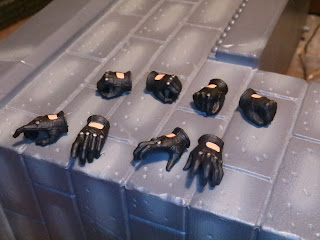 * You want some extra hands for Harley? Well, Mezco delivers on that front! You've got a pair of fists, a pair of tight grips, a pair of open palms, a cradling left hand, and a pistol grip right hand. 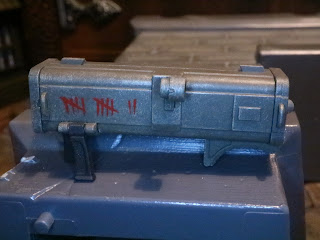 * Harley Quinn comes rocking some serious equipment, some of which new and some which was included with the previous Harley Quinn. The first piece we'll be covering is this really cool rocket launcher which also comes with the old school Harley. It's sized just right for her (Mezco avoided the trope of action figure rocket launchers usually being ridiculously oversized) and she can hold it perfectly with the hinged handle on the side. The paint work is nice, too. I like the little tally marks scrawled on the sized. 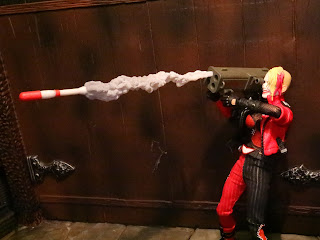 * The best part of the rocket launcher is this really cool launching missile that's depicted flying out of the barrel. The missile looks really cool and is followed by a trail of smoke that plugs into any of the launch chambers. How cool is this, right? This also came with the previous Harley but I suppose you could actually give one Harley both rockets if you wanted to. 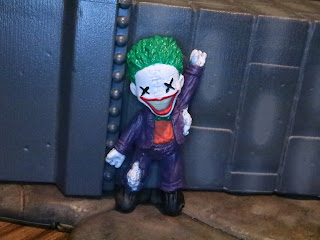 * Another reused accessory is Harley's little doll of the Joker. He's a solid plastic accessory though he looks like a raggedy stuffed animal, complete with stuffing spilling out in a few places. 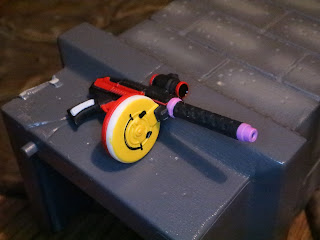 * Harley's first new accessory is a sub-machine gun. It's red and black with pink deco on the barrel and a drum magazine with a smiley face on it. It's a really cool accessory that is clearly a fairly impressive piece of hardware which Harley has customized to her liking. 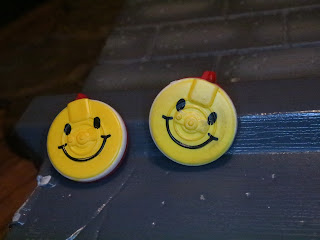 * The drum magazine is removable and Harley comes with two magazines to swap out. 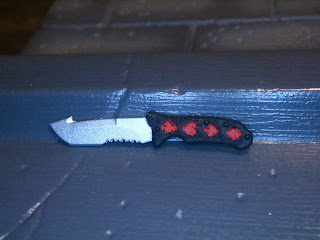 * The second new accessory is a very wicked looking knife. This looks like some sort of hunting knife used for gutting game or something. All of the suits in a deck of cards are represented etched into the handle, too. 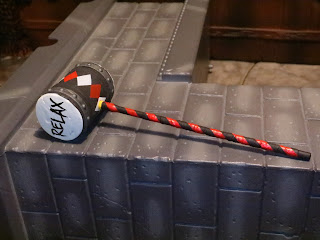 * Harley's last weapon is perhaps her most iconic: A mallet! This one is actually different than the one included with the standard Harley as it has a red and black paint job and the word "relax" written on the head of the mallet. Relax, indeed. That's some Loony Tunes style therapy right there. 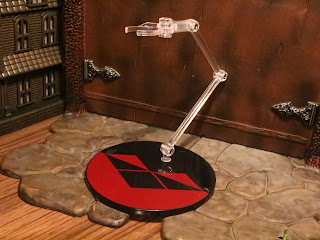 * Harley comes with a round base with her diamond logo on it and a removable foot peg. The foot peg can be replaced with an articulated display arm which allows you to get some great, secure poses here. The joints are very nice and tight on the display bar and it can absolutely support the figure's weight if you want to depict Harley leaping in the air to bash some fools. 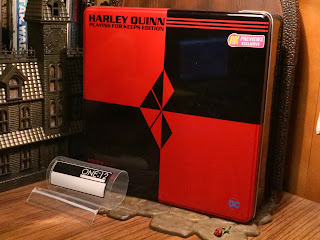 * Like many of the other PX/ Previews exclusives Harley Quinn: Playing for Keeps Edition comes in an metal tin. It's extremely collector friendly with removable plastic trays and a One:12 Collective branded bag for storing accessories close at hand. I'm not sure these tins are as needed on every figure as they were on some of the earlier releases but they're still pretty nice. 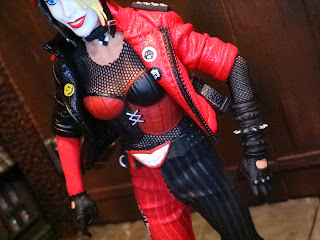 * I like Harley's jacket but I'd like to be able to remove it to give her a different look and better elbow articulation as well. Unfortunately, it seems like the presence of the spiked cuff on her left forearm might be designed to keep the jacket on. Yeah, I'm sure you could "surgically" remove it but I just want to be able to remove it with ease and without having to disassemble the figure. 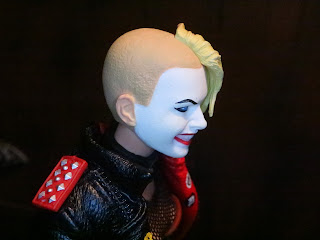 * Yes, Harley Quinn has shaved her head in the comics once or twice but it's not typically her look. I like the punk vibe of the figure but I really am not feeling the shaved head with... half of her bangs left. Is that just called a bang? I'm not a fan. I really like the helmeted head though I might use the non-hood wearing head from the standard Harley on this one, or maybe one of the extra heads from the Suicide Squad Harley Quinn. 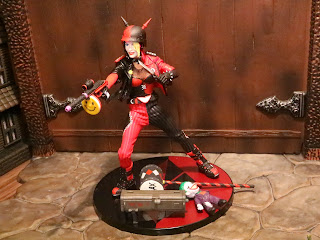 While the more standard Harley Quinn was a bit of a disappointment to me (not bad, just not as good as I hoped for) this one is really impressive. I don't like the shaved head at all but the rest of the figure is excellent. It's a really cool and fairly unique looking take on Harley that borrows from multiple sources while offering up plenty of unique ideas of its own. She's got a great complement of weapons, too, though I wish there were a few more differences in the accessories included with both figures. This one gets a Great and a 1/2 from me. There aren't as many Harley Quinn figures coming out these days as there has been over the past five years or so but this one is worth your attention.