Ho Ho Ho! It's the holiday season and, for some reason, Christmastime always gets me in the mood to watch Star Wars movies. I've associated Star Wars with Christmas for years, long before Disney released The Force Awakens in December of 2015, so this is nothing new for me. It's probably a nostalgia thing. We've been watching lots of Christmas movies and Star Wars stuff at my house. What about you? What weird things do you associated with the holidays? This year I feel like The Mandalorian keeps giving me a present every week as this show is hot fire and I love it. 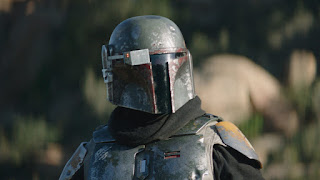 Remember last week when I said Chapter 13 may have been the best installment of The Mandalorian yet? Yeah... That's up for debate now as Boba Fett has now made his way directly into the path of Din Djarin and Grogu. Joined by Fennec Shand, whom we thought was killed in Chapter 5: The Gungslinger, we now have a pretty tough team going up against Moff Gideon and the Dark Troopers. Holy smokes! Boba Fett was amazing in this episode, right? The Mandalorian is just delivering on every level. 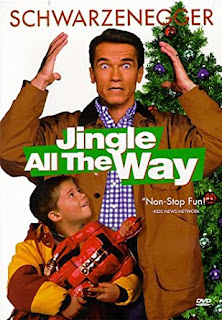 Is Jingle All the Way the greatest Christmas film of all time? I'm not going to say that it is but I'm also not going to say that it isn't I'm considering it. I love this movie. Love it. I watch it at different times of the year but watched it again this week. It's funny, it's chaotic, and it's absurd. How can you not love a film that includes:
* Arnold Schwarzenegger punching a reindeer.
* An army of black market Santas, including the Big Show and a ninja Santa with candy cane nunchakus.
* Sinbad being his Sinbaddest as a postal employee.
* Young Anakin Skywalker drinking a bottle of hooch, saying "Here's to you, dad!"
* Phil Hartman at his smarmiest, hitting on Rita Wilson.
* Arnold yelling "Ted! Those are my cookies!"
* Lots of shots of toy stores filled with mid 1990s Toy Biz toys.
This movie is the best. Seriously, don't believe the hate. It's amazing. 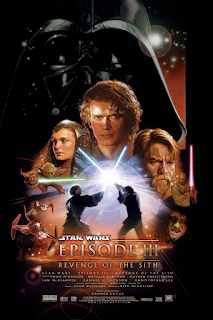 * On Wednesday night my daughter wanted to watch Episode III: Revenge of the Sith. I'm always down for watching a Star Wars flick so we popped the Blu-Ray on and let the film roll! She had seen Anakin and Obi-Wan's duel before but never the entire film. Overall she seemed to enjoy it though she "hid her eyes whenever Anakin and Padme were close together. Episode III came out 2 days before my wedding date and I always joke to my wife that I only had two days to anticipate our wedding during our engagement because the rest of the time prior I was anticipating Episode III. This one is still pretty good, probably my favorite of the Prequels
ROTS, and while it's not as "fun" as Episode II the end of the film has huge payoffs. I always feel like Anakin's just waiting to jump at the chance to turn to the Dark Side but once he does Hayden Christensen really does an excellent job of being conflicted, tortured, and flat out angry. When's the last time you watched Episode III? 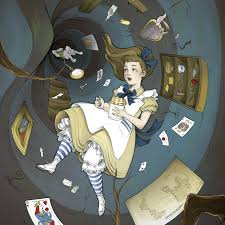 * We picked up Unlock! Heroic Adventures sometime over the summer and while we've played "Sherlock Holmes" and "Insert Coin" we hadn't played the Alice in Wonderland themed "In Pursuit of the White Rabbit Yet." This was definitely the most challenging of the three games and we completed it going over the 90 minute timer by about 13-15 minutes. In this one you actually use a simple storybook that guides you through the game as you "write" each chapter. Being familiar with Alice and Wonderland is a huge asset to this one. There are some very clever and tricky puzzles and befitting of the bizarre nature of Wonderland but only two truly stumped us; one because we missed a rather simple clue and one because we were attempting to do the right thing but with the incorrect cards. 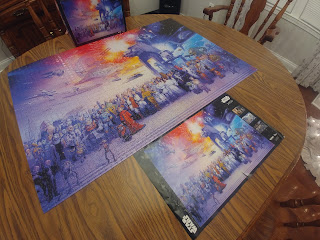 * Oh, and how about some more Star Wars? We actually started this 2000 piece Star Wars puzzle on Friday, worked it some Saturday afternoon, and finished it Tuesday night. It dominated the dining room table at my parents' house for the better part of a week but we finally finished it! Pretty cool, right? It's filled with characters from the Original Trilogy and the Prequels plus lots of ships and vehicles

Last, but not least, let's take a look at the most popular reviews of the week! Interestingly this week all of the Masters of the Universe, TMNT, and G.I. Joe stuff stuff dropped off the list to be replaced by Star Wars reviews. Oh, and the only review of a Harry Potter item I've ever reviewed. That's another property that seems to be now connected with Christmas, isn't it?
Jango Fett (Star Wars: Bounty Hunter) Star Wars: The Black Series roared up to the top of the list and has stayed in place like the boss he is! While he's mostly a repaint with the new facial printing he's a superior figure to the previously released Jango. Hasbro has been putting out some interesting figures in their GameStop exclusive Gaming Greats subset and Jango Fett from the 2002 game Star Wars: Bounty Hunter seems to be one of the most popular.
Scout Trooper from Star Wars: The Black Series is another one of the GameStop Gaming Greats figures from the Black Series who is on their second week, this one based on one of the enemies from last year's Jedi: Fallen Order. This guy has a fair amount of new tooling and some new accessories, making him a pretty desirable release from a subset that's usually made of repaints.
Han Solo (Endor) from Star Wars: The Black Series is our first newcomer this week. Han is reliable, forming part of the 5/6ths of the most popular reviews of the week that are all Star Wars related. This is an excellent figure and definitely one of Hasbro's strongest releases. They've been on a roll lately for sure.
Hermione Granger from Harry Potter Collectible Minifigures Series 2 is our second newcomer this week. Surprisingly, she's from a property that I don't collect (but my daughter does) and which I haven't reviewed anything else from. Should I be reviewing more Harry Potter stuff on here or something? I do have it on good authority that my daughter will be getting lots of magical Harry Potter Lego sets under the Christmas tree this year.
Darth Vader from Star Wars: The Black Series is our third newcomer though, knowing Vader, he'll probably be in first before long. This is Hasbro's Empire Strikes Back version of Darth Vader and he's the best they've released. The best Vader figure from the best Star Wars flick. What's not to love?
Plo Koon from Star Wars: The Black Series is our fourth and final newcomer this week. The Black Series Jedi Council has been a bit week so it's nice to flesh it out a bit. Plo Koon really turned out well, didn't he? That headsculpt is amazing!
That's it for this week folks. Enjoy The Mandalorian today and keep on keeping on!