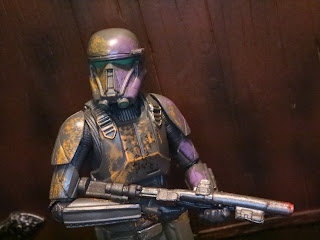 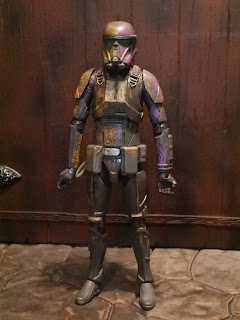 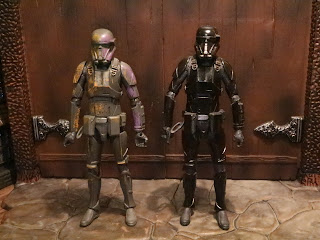 * The Credit Collection Imperial Death Trooper is on the left while the Phase III Death Trooper, released in 2016, is on the right. So far as the sculpt goes these two are exactly the same. The only differences are the radically different paint jobs between the two figures. 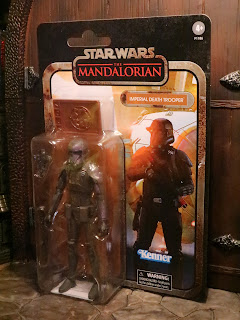 * The packaging is quite nice and if someone were inclined to keep these carded I couldn't say I'd blame them. They're on a vintage Kenner styled card, like the 40th Anniversary figures, but rather than a photo from The Mandalorian TV series you get a concept art image that was shown at the end of one of the episodes. This is some slick presentation and it's really, really cool to see The Mandalorian title in the box at the top under the Star Wars logo. The image looks fantastic and matches the figure very well. 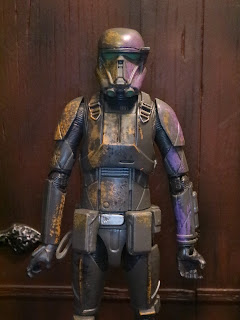 *  The Death Trooper has a really cool outfit and build. They're slimmer, taller, and kind of inhuman looking. If Stormtroopers are loud, visible, and like a sledgehammer, the Death Troopers are silent, shadowy, and like a knife. They're creepy and the unusual paint job on this Credit Collection version really ups the weirdness with the unusual paint smattering on the side. It looks great, though. The sculpting is nice and this is one of the figures from Rogue One that has held up quite well as the Black Series has continued to improved. 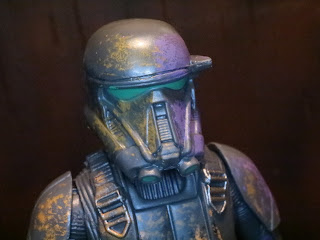 * The helmets is amazing. There's a lot of high tech gear put into these domes which allow the Death Troopers enhanced vision and give them the ability to communicate without being understood by those around them. The green visor breaks things ups while the paint splatter makes the Death Trooper seem a bit grimier and aged. 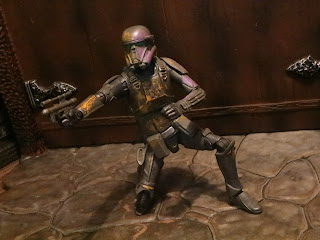 * I really like the articulation on the Black Series and while the Death Trooper is an older figure he still holds up pretty well. Sturdy, durable, and fun to play with, you won't be disappointed with this guy in the slightest. While the joints aren't as nice and fluid as modern figures they're much improved from the Phase I and Phase II troopers. 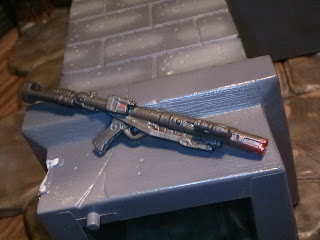 * The Death Troopers tote around BlasTech E-11Ds, a modified version of the standard E-11 that's designed to offer more power and a higher rate of fire for close quarters battle. The sculpt is detailed and the paint applications bring the weapon to life. 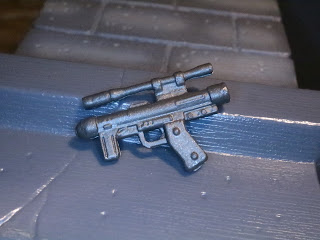 * The Death Trooper's sidearm is a BlasTech Se-14r. This modified version of a familiar pistol is designed to offer up repeated fire and has a tactical scope attached, too. It's a great design and fits the Death Troopers' menacing personalities well. 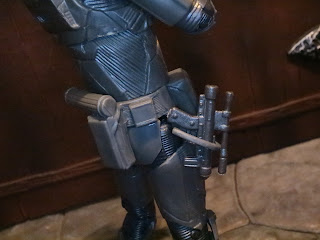 * Interestingly the Death Trooper has a loop on the right side of his belt to hold the modified SE-14C. It's a simple but cool way for the trooper to carry around his sidearm. 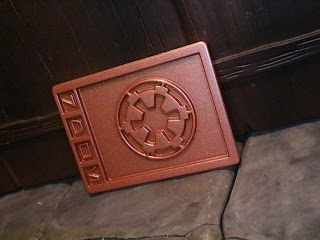 *  Since this is The Credit Collection each figure comes with an Imperial Credit. You can see them stacked on a table in the show at one point, so they're definitely there and available in multiple colors.. It looks like they're pretty accurately sized. The Credit is a simple plastic piece meant to be sort of a prop replica rather than an accessory intended for use with the figure. The Death Trooper's is sort of a reddish bronze. Across the side of the credit you can see the Aurebesh characters that spell out ROWE. What's that mean? I can't find an answer anywhere! 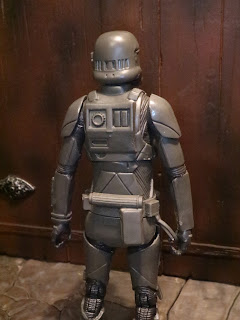 * The sculpt is fine on the back but why is there no paint work at all? No differentiation between the armor and the body suit, no unique paint splatter, nothing! That's a bit disappointing, isn't it? 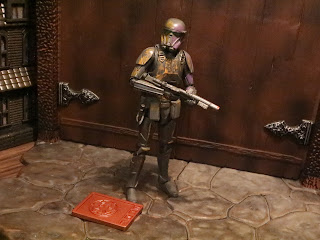 The Death Trooper is the least expected figure in this series since he wasn't released for The Mandalorian but he's still a welcome addition to the line. It's interesting to get this guy in a different look and the front of the figure awesome. Too bad the back of his armor is kind of bland, huh? The Death Trooper isn't the best figure in The Credit Collection but he's not bad, either. He's definitely worth picking up if you dig the Trooper or The Credit Collection. It's nice to see these guys available again, too, as they've been used frequently but we haven't seen a re-release for some time.

For more figures from The Credit Collection check out the following:
Cara Dune
IG-11
The Mandalorian