The Road to Rise of the Skywalker: Clone Commander Fox from Star Wars: The Black Series Phase III by Hasbro 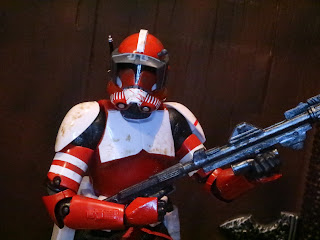 Triple Force Friday was about two weeks ago and, like many other Force Fridays before it in recent memory, it was pretty hit or miss. Most places didn't seem to get much stock in (Frozen II definitely got all of the attention) and a couple Wal-Marts I checked out looked at me like I had two heads when I asked where the Star Wars stuff was (they didn't know of anything coming out, I was told). I did make a few purchases, though, and mostly from GameStop. Folks, I know gamers give GameStop a hard time, but they're a fantastic store for action figure collectors: Nice exclusives, they carry stuff at retail no one else currently does, they have a good rewards system, and you can preorder stuff. The three GameStops I frequent have nothing but helpful staff who know me on a first name basis, fuss over my little kid (they always show her the new Pokemon stuff), and sometimes hold back stuff for me they think I might be interested in. If it weren't for GameStop my Triple Force Friday would have been a bust! One of the figures I picked up on Triple Force Friday was the GameStop exclusive Clone Commander Fox from the Black Series. Commander Fox, AKA CC-1010, is the Commander of the Coruscant Guard, a division of shocktroopers stationed on Coruscant to provide security to the capital of the Galactic Republic. I'm always down for a new Clone Trooper so Clone Commander Fox was my first pickup on Triple Force Friday. We've had the Coruscant Guard troopers since 2016 so it's nice to finally have Commander Fox to lead them. Let's check him out after the break... 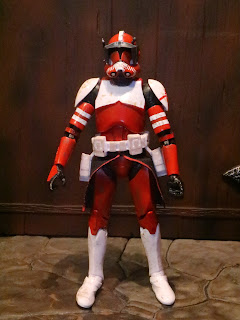 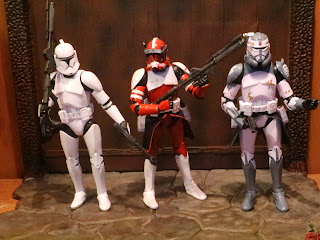 * Commander Fox (in the middle) uses most of the same body that Clone Troopers (left) have been using for five years and the newer holstered belt and kama that has been reused previously (most recently with last year's Commander Wolffe, on the right). The only truly new piece here is Fox's helmet. 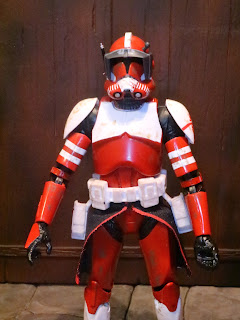 
* While Clone Commander Fox is mostly a repaint, he's a very sharp looking repaint. The red and white color scheme with black accents looks fantastic. Clone Troopers are one of those figure types that just look better as you acquire more of them. They just have a cool shelf presence and I'm always excited to see new ones added to the collection. Personally, I'm glad Hasbro has been very consistent in their parts reuse as it gives the figures a nice uniformity when on display. 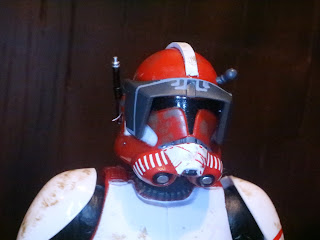 * Commander Fox's helmet is unique. It has a visor and antenna on the right side, not unlike Commander Cody's, but the top of the helmet and the small antennae on the top left is very different. 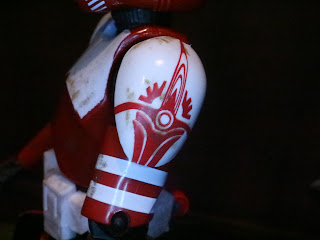 * On his left shoulder Clone Commander Fox is sporting a very nicely painted symbol of the Coruscant Guard. It's quite sharp! 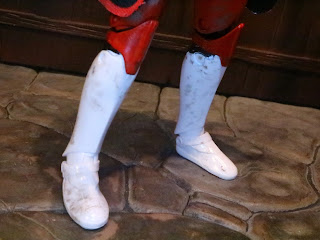 Looking at the figure, you can see that Commander Fox has a number of dry brushed wear and tear effects to give him a more battle-worn appearance. I can understand that some folks would probably rather have a neat, clean looking Clone Commander but I kind of like the personality the paint effects give him. 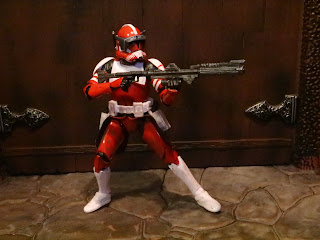 *  Commander Fox utilizes most of the body of a standard Clone Trooper figure, meaning he's durable and nicely articulated. His hips are restricted a bit by his holsters and, sadly, his shoulders don't have the revised pauldrons that allow for a better range of motion. Still, he's not bad; just not as good as recently created newer figures. You can certainly have a lot of fun posing him and he's sturdy enough to survive most situations he'd be thrown in. 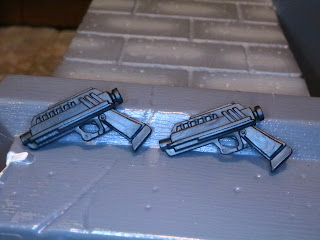 * Fox comes with a nice assortment of weapons, first of which are his two DC-17 blaster pistols. They look great, feature crisp sculpting, and fit easily in his holsters. 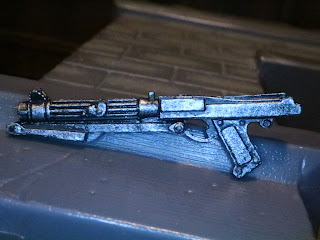 * Next up is the DC-15A blaster. This small rifle has come with most Clone Trooper figures over the past five years but it's still a sharp looking weapon. I like the drybrushed effect on Fox's DC-15A, as it makes it look a bit meaner. 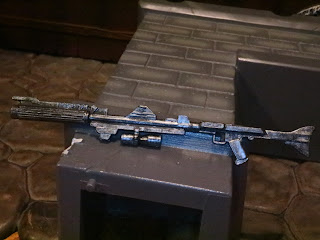 * Last up is another old standby for the Clone Troopers: The DC-15 blaster rifle. Like the standard DC-15A, the DC-15 also has a nice drybrushed effect to give it a bit more pizazz. 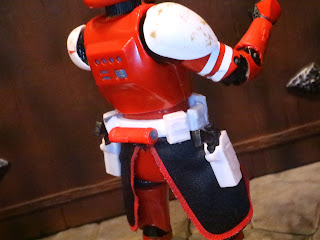 * Like Captain Rex and Commander Wolffe before him, Commader Fox has two working holsters and a real fabric kama on his belt. 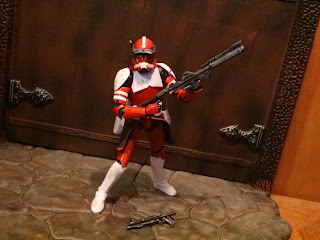 I really like Commander Fox. Yeah, he's mostly a repaint, but there's something really fun about collecting Clone Troopers, especially when they're as consistent as the Black Series figures. This guy has a great new headsculpt, solid articulation, excellent paintwork, and four blasters. That's not bad anyway you look at it. You'll pay a bit more for him since he's a GameStop exclusive, but it's not any different than the regular price for a Black Series figure. Personally, Fox is one of my favorite Clone Troopers to date and I'm quite glad to have him. He's an Epic addition to the growing army of the Galactic Republic!