The Scream of 31 Days of Toy Terror: Mola Ram from Indiana Jones by Hasbro 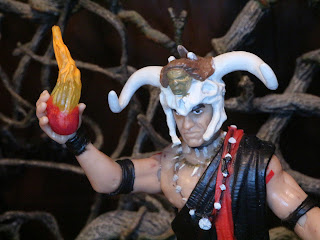 One of my favorite film series of all time is Indiana Jones and while Temple of Doom isn't my favorite now (it's my third favorite), it definitely was my favorite as a kid. I loved tombs and temples and stuff like that, and the fact that most of the film takes place in a giant underground temple thrilled me. I remember watching the movie for the first time, probably on October 1 1989 on ABC, probably when it was an ABC Sunday night movie. I loved the film a lot and was nuts about the main villain, Mola Ram. The Indiana Jones movies, and particularly Temple of Doom, combine a mixture of old fashioned adventure film with horror elements to create something that's shocking, exciting, and fun and man, did Mola Ram make for a shocking and exciting villain. Played by the late Amrish Puri, Mola Ram is a terrifying presence on screen. While Indy has battled his fair share of villains, Mola Ram is definitely the villain who still stands out the most and since he's so darn creepy, he's earning a spot on The Scream of 31 Days of Toy Terror! Mola Ram was released in the kind of tough to find fourth series of Indiana Jones figures back in 2008. This was the last series of figures with a wide release (the true final wave was released as an SDCC 2011 exclusive) and, sadly, it showed how Hasbro was really improving this line as it went. Hasbro was on fire with this scale back in 2008. Let's check out Mola Ram after the break. Kali maa! 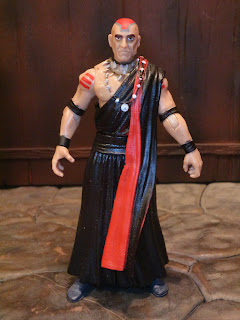 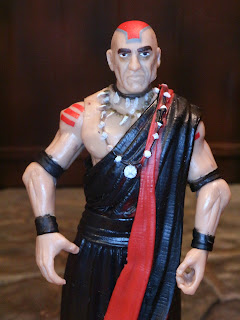 * Mola Ram is a fantastic looking 1/18th scale figure and easily one of the most impressive figures in the entire Indiana Jones line. He is insanely well detailed with lots of paointed elements for his tattoos and the various necklaces he wears. The upper part of his robe is actually a separate piece that is permanently attached over his torso, but it gives the figure a much more life-like appearance. 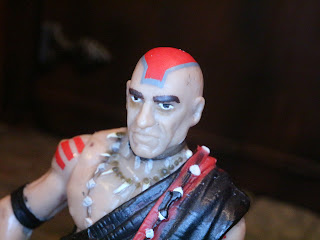 * The headsculpt is awesome! The Indiana Jones line definitely had a few questionable headsculpts, no doubt, but Mola Ram isn't one of them. He's such an improvement over the Raptor figure I used for Mola Ram as a kid (Hawk was my Indy, by the way). The likeness is excellent and the paintwork on the eyes even gives them a shadowy appearance. 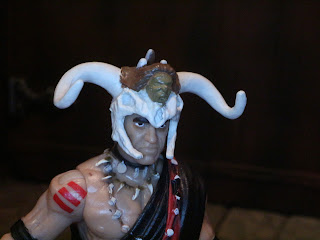 * Mola Ram's helmet fits perfectly and features the horns and shrunken heads seen in the film. Pretty terrifying, right? Apparently the idea behind the cow skull for Mola Ram is that it would be considered sacrilegious due to the sacred nature of cows in Hinduism. 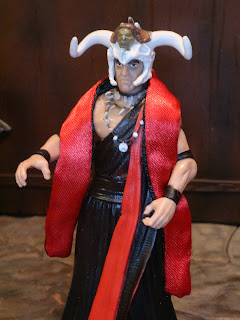 * Mola Ram also includes a fabric sash that can be placed over around his shoulders. It takes a bit of work to get it in place but it looks good. It's actually black on one side and red on the other, matching the rest of his outfit perfectly. 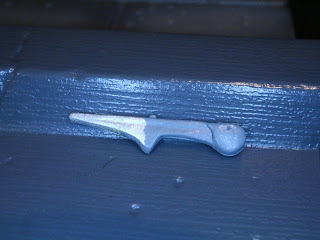 * Mola Ram comes with some great accessories but his only traditional "weapon" is this dagger which Mola Ram uses in the film. It has an unusual shape that matches the film prop fairly well, although the blade might be a bit too short. 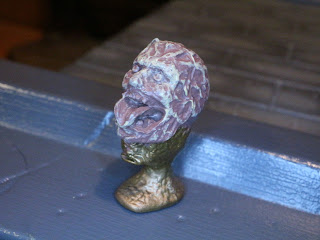 * Let's be honest: There's some really disturbing stuff in Temple of Doom! Seriously, it and Gremlins are the films responsible for the PG-13 rating. The Chalice of Kali, essentially a mummified human head on a crude golden chalice, is really, really creepy, especially since it's used to pour the Blood of Kali into the mouths of the victims of the Thuggee cult. There was a larger version of the Chalice of Kali released as an artifact accessory with the Colonel Dovchenko figure in the second series, as well. 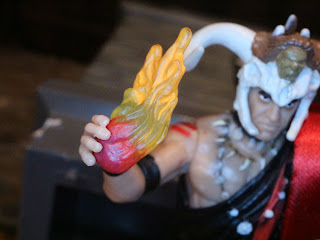 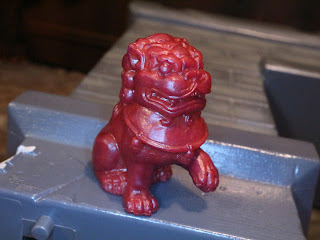 * Every single carded figure came with a mystery relic in a cardboard crate (I didn't take a picture of the crate. Oops!) Mola Ram came with a Chinese guardian lion statue cast in a really nice red plastic. The artifacts were a really cool addition to the line and definitely made for cool background pieces or for more MacGuffins for further Indy adventures. 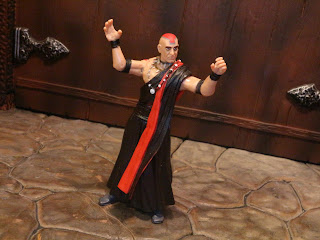 
* My only negative with this figure is that his lower body, while not a "salt shaker" figure, is useless. His robe is fairly stiff and there's no movement there (he has swivel hips, but they'e completely impeded). 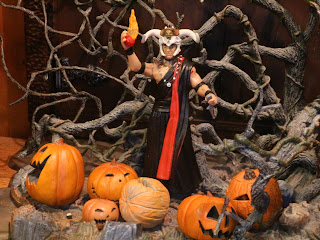 Mola Ram might be one of the best figures in the short lived Indiana Jones line. I say short lived, as it last less than a year, though it did get out most characters, though there are some fairly sizeable gaps in the line. Still, what we got was a dream for an Indy fan like me and Mola Ram was a toy I'd wanted since I was a kid (I never knew the LJN figures existed until years later. He's an Epic figure with lots of creepy accessories. Mola Ram is an incredible villain that blends together an old fashioned adventure movie and a horror villain together quite well.

This is the first figure of Mola Ram I've reviewed on the site. For more figures from Hasbro's Indiana Jones line, check out the following:
30th Anniversary Set (SDCC 2011 Exclusive)
Indiana Jones with Ark
Posted by Barbecue17 at 10/17/2019