Action Figure Review: Mer-Man from Masters of the Universe by Super7 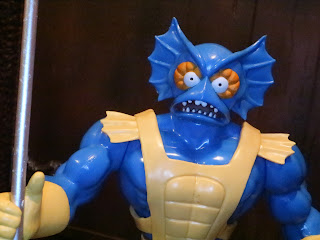 Super7 is back with another series of their neo-vintage Masters of the Universe figures inspired by the Filmation cartoon series and let me tell you that this one is my favorite series yet. Unfortunately, this is one of the many current MOTU lines that is going to have to disappear next year so that Mattel's own Masters of the Universe Origins line doesn't have to deal with competition, so scarf these up while you can if you're interested. First up is Mer-Man, and what a great choice he is! Mer-Man looked very different in the Filmation cartoon from his toy appearance and Super7 captured him nicely. Let's check out what a vintage Mattel Filmation Mer-Man might have looked like after the break... 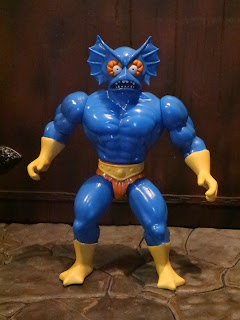 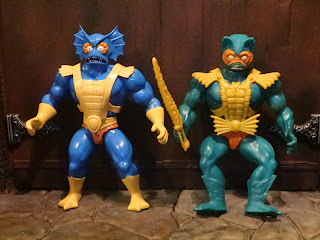 *On the left is Super7's Mer-Man while Mattel's original vintage Mer-Man is on the right. Just looking at these should point out the differences. Super7's is very much a bluish green while the vintage toy was definitely green. The armor is less detailed and Mer-Man features the yellow gloves and boots of his cartoon counterpart. 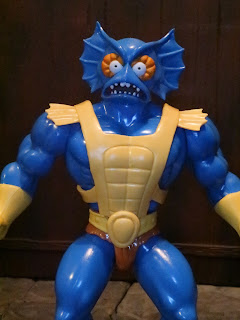 * I love the look of this guy as he just screams Filmation. He's fun, colorful, and just goofy enough to be charming while still also looking like he's ready for some action. The body shape, proportions, and style are all very similar to the vintage figures but the more minimalistic details on his armor go a long way towards making him seem like he just swam out of some traditional cel based animation. The armor is removable, by the way, just like the vintage toy's. 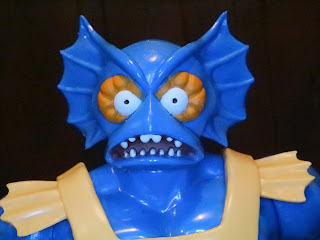 * The headsculpt is perfect. Darn perfect, really. I've never really liked the vintage Mer-Man's headsculpt as he always looked more like a cat to me (that's part of the reason I think it looks better as Stinkor) and I've always used the alternate head on my MOTUC Mer-Man. This guy nails the Filmation headsculpt, though, and it is one of the best Mer-Man portraits I've ever seen. The eyes and the open mouth are incredible! 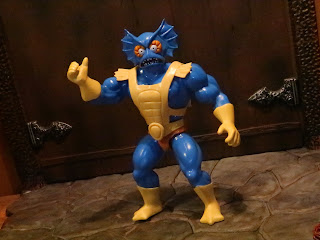 * I had some problems with some of the earlier figures in the line, particularly with the legs on Man-At-Arms and Beast Man but Mer-Man seems great. While he's a little different, he really feels quite a bit like a vintage figure. He still has the swivel/hinge hips of this line rather than the elastic bands of the vintage toys, but it works. I think Super7 has definitely improved the hip joint, too. He stands up really well. 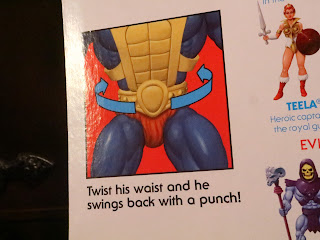 *  Yes, the unsinkable Mer-Man actually features a spring loaded swivel waist. I still have no idea what sorcery causes these figures to be able to punch like this but it works pretty well. Beast Man can punch, backstroke, and swing his sword with just a turn of the waist. 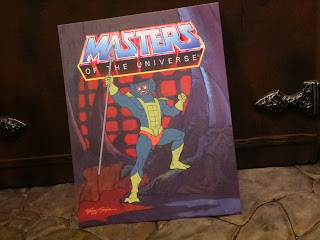 * Another cool part of this series is the art cards included with each figure. They kind of mimic the look of the minicomics in the vintage packaging but they're a simple cardstock art print. On the front is a picture of Mer-Man from Emiliano Santalucia while the back features three images of the evolution of the character from a toy to a cartoon star. 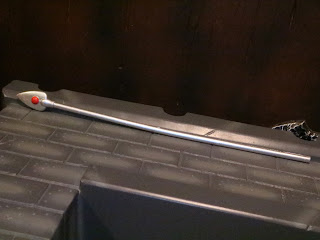 * Mer-Man comes with a spear holding the Crimson Pearl, the red jewel that summons the sea demon Bakkull in the episode Teela's Quest. The spear is a nice metallic silver while the Crimson Pearl is painted a nice green color. Just kidding: It's the Crimson Pearl. It's painted red. Glad you're paying attention, though. 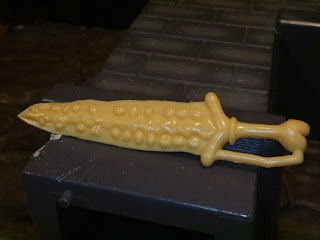 * Mer-Man's second weapon is his famous "corncob" sword. I assume it's made from coral or fish bones or something. It's much sharper than the vintage toy's sword, though. It can actually deliver a pretty mean wound! 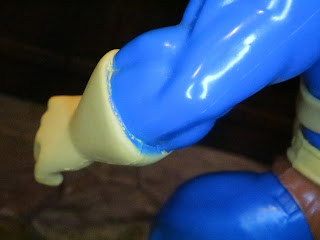 * My only complaint is that there's definitely some paint slop on the edges of the gloves. Stuff like this just stands out more on a figure with a much simpler paint job like Mer-Man here. 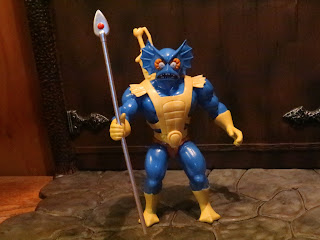 Of all of the neo-vintage Masters of the Universe figures from Super7 thus far, I'm pretty sure that Mer-Man is my favorite thus far. He has a perfect headsculpt, two very cool accessories, and just feels like a very solid, very well made toy. He's a Great and 1/2 figure and well worth checking out. If you're a MOTU fan who digs the vintage aesthetic of these guys, Mer-Man is an excellent figure to test out. This series has some other really cool figures, though, so we'll have to see if Mer-Man stays in his position as the premiere figure in the line once I get around to opening Prince Adam, Orko, and Trap Jaw.

If you're a fan of Mer-Man, the guy who made talking to fish cool, then check out my reviews of the M.U.S.C.L.E. standard Mer-Man and green Mer-Man figures, the Loyal Subjects' Mer-Man, and the ReAction Mer-Man (Carry Case Color).

For more Masters of the Universe figures from Super7, check out the following:
Beast Man
Man-At-Arms
Possessed Skeletor
Robot He-Man
Teela
Posted by Barbecue17 at 10/05/2019