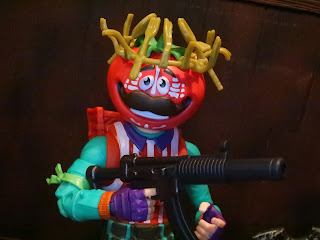 Series 2 of Jazwares' Fortnite: Legendary Series figures began shipping early last month and, oddly, not every figure seemed to be released at the same time. DJ Yonder came out first with Tomatohead and Leviathan shortly after. Jonesy and Abstrakt showed up near the end of September/ early October and, as of now, Valkyrie is nowhere to be found. Weird, huh? I've been seeing cases at Wal-Mart that have DJ Yonder, Tomatohead, Leviathan, and Jonesy, but no Abstrakt. Anyways, Tomatohead. Yup! These guys just get stranger and stranger. Apparently an employee of a pizzeria (maybe a delivery person?), Tomatohead's real name just might be Uncle Pete. He's well armed for sure, and makes another really out there figure for this collection. Ready to check him out? Then join me after the break... 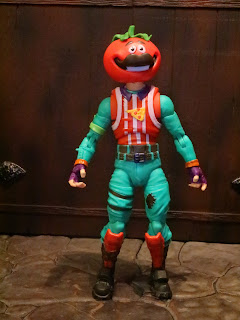 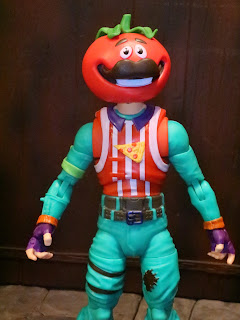 
* Tomatohead has a tomato for a head. Seriously, this is one crazy looking guy with a very, very flamboyant outfit. Seriously, the Joker called and told this guy to tone it down a bit. I love how bizarre the outfit is at the colors clash but in the best possible way. There are stripes, a pizza on the front of the shirt, purple gloves, green sleeves, random green armbands. Heck, Tomatohead has even got two belts on. This guy's a hot mess and he revels in it. He'll fit right in with the Imaginext Pizza Chef (though that guy's really short) Pizzaface from Teenage Mutant Ninja Turtles (who's short but not that short). 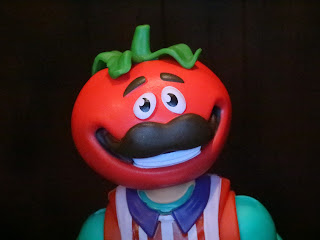 * The standard head is a giant tomato head. Tomatohead definitely looks like the mascot for a pizzeria chain, especially with the cheesy grin and the giant mustache. The head is big enough that you can really imagine someone's head is actually inside there, too. You know, since it's the helmet for a costume. 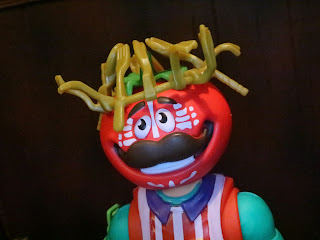 * The second headsculpt features the same sculpt but it has makeup on Tomatohead's face and a crown made of bent utensils. Apparently this is what you unlock if you finish the Season 5 Tomatohead challenges, so it's pretty cool to get this for fans of the game. These are actually swappable heads, and not face plates like most other figures in the line. They swap easily, though, as the head sits on a true balljoint. 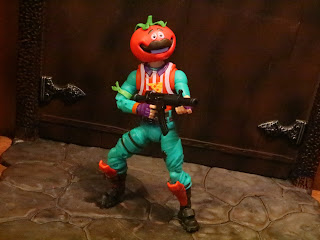 * The articulation on these guys have all been incredible so far, and Tomatohead is no exception. He feels sturdy, durable, and has articulation that feels like it could give Toy Biz's Marvel Legends line a run for its money. The inclusion of things like toe joints, lots of swivel hinges, double hinged elbows and knees, and butterfly pecs allow this guy to take some crazy poses and uses two-handed weapons with ease. 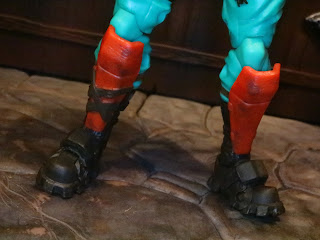 * Check out his armored boots! You know he'll need these when he goes out to pass out balloons or work the cotton candy machine at the pizza parlor! Those kids like to beat up on mascots for some reason. 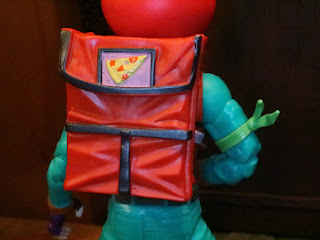 * Tomatohead's "Back Bling" is called the Special Delivery. It's a simple backpack that plugs into his back and looks like one of those pizza carriers delivery drivers use. It looks like a TMNT accessory as it features a lovingly sculpted slice of pizza though there are more paint applications on this accessory than on nearly any toy Playmates has ever released. 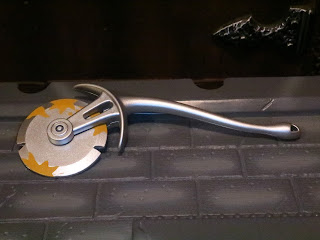 * This is the Axeroni. it's a giant pizza slicer that actually spins. It's covered with what be cheese, as well. Would this really work well in a fight? I mean, it looks awesome, but how much damage would it actually do? A lot? Hardly any at all? I've always thought a pizza cutter would be a cool melee weapon. 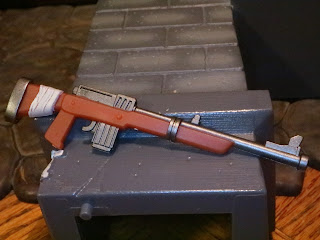 * Tomatohead comes with two firearms, but they're not wacky or anything. They're just regular guns. First up is the Bolt Action Rifle, one of the standard sniper rifle type weapons in the game. This is a really cool looking rifle with a wrapped stock, gunmetal gray mechanics, and a wood body. I love the look of this one! 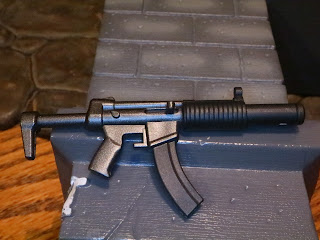 * The second firearm is the Suppressed Submachine Gun, which looks quite a bit like a silenced MP5. These weapons still remind me of the in-game models from GoldenEye 007 on N64, and that's still a good thing! Seriously, does this not remind anyone else of the silenced D5K? 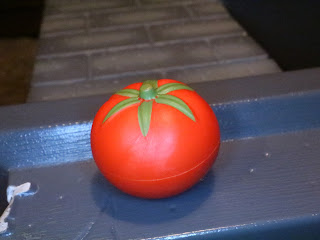 * Tomatohead comes with... a tomato! Yeah, it seems like an oversized, but fairly standard tomato. It even has a slit in the back so the figure can hold it. Maybe Tomatohead is going to the Renaissance Fair to toss vegetables at some trash talking jesters? 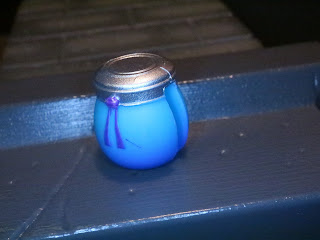 * Last, but not least, is the Shield Potion. The Skull Trooper had the same accessory, just FYI. 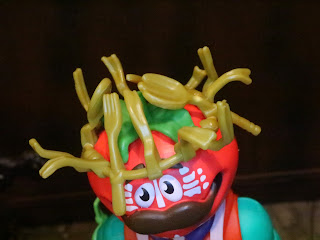 * Take this as more of a warning rather than a criticism: it's very tough to get the crowned head on the figure without putting pressure on the utensil's on Tomatohead's crown. I'm concerned about breakage but I did see a stress mark or two. Be gentle! 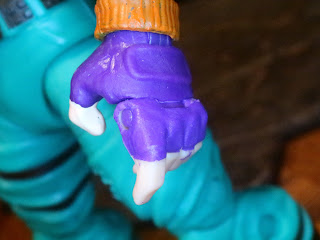 *  My biggest complaint with this line is that Jazwares went with hinged fingers. The fingers move with one hinge and while they're not as problematic as the fingers on older Marvel Legends figures, I still don't like them that well. They have a fairly tight grip, but sometimes they're still tough to us, especially for thinner accessories like the melee weapon or a gun grip.I will say that the series 2 figures seem to have even tighter grips though, so maybe these eventually won't be much of a problem. 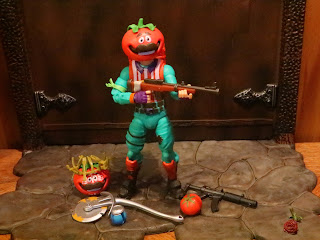 Some folks might think I'm being overly generous with this line but I'll ask: When is the last time you got a uniquely sculpted action figure with this much articulation, insanely good quality and durability, multiple portraits, and six accessories? It just doesn't happen these days. Jazwares is definitely one of the companies who is going to the top in 2019 and I'd love to see what other licenses they might pickup and do justice to. Tomatohead is another Epic figure who is fun to play with and pose and comes loaded with accessories. These are some of the best action figures on the market right now, so check them out!