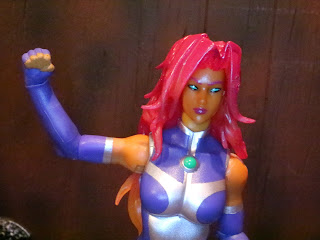 I know that I've been making my way through the most recent (and final) series of DC Comics Multiverse figures lately but I am going to take a brief detour and check out a couple figures that were released earlier this year. Starfire is from the Ninja Batman Collect & Connect series which ended up being rather difficult to get a hold of due to the poor distribution this line has suffered for the past few years. Starfire was a must buy for me, particularly because Mattel's DC Universe Classics release was pretty disappointing. This one's a lot better though and while it doesn't feature Koriand'r's classic costume, it does feature her modern costume which is really, really nice. Honestly, I'm a big fan of this look. My daughter was really into the DC Super Hero girls line which used a similar outfit, so I've wanted this look for Starfire in my preferred DC line for a few years now. I actually preordered Starfire through Amazon months ago but she finally showed up at the end of September. Let's take a look at her after the break... 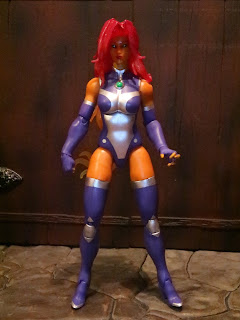 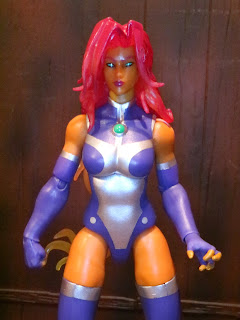 * Starfire is a pretty nice looking figure. Like so many of Mattel's DC figures, Starfire does use a pretty standard body without too many specific details (the green gem on her chest is a sculpted part of her torso) but the paintwork handles most of the details. The paint apps are pretty neat and clean and the colors are just right. Between her bright orange skin and her silver and purple outfit, Starfire will definitely standout on your shelf. 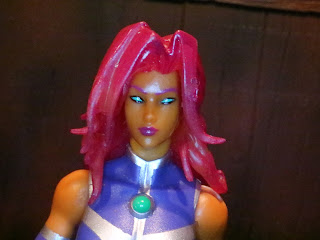 * The headsculpt is pretty nice, too. Solid paint applications and some seriously great hair. Kori's hair is molded in translucent plastic which gives it a very dynamic look. In fact, it gets even better... 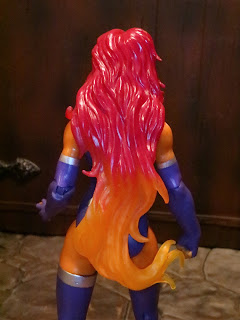 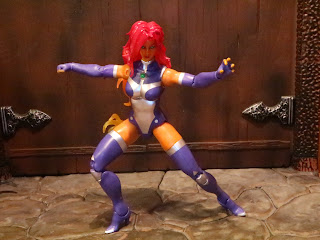 * Mattel has improved the articulation over the past couple of years on this line and Starfire takes full advantage of the new body. It looks great and moves pretty well, particularly due to the double hinged knees and balljointed hips with a wider range of motion. 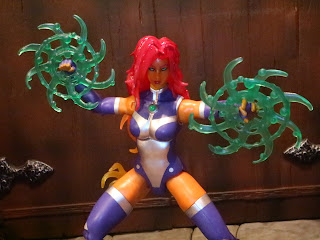 * Starfire includes two starbolts, which remind me a lot of the energy effects from the Marvel Legends line, but these are actually molded from a very flexible plastic that makes them nice and pliable. They work great with no fear of plastic breakage and they look fantastic on Starfire's wrists. Seriously, she's a very cool, very colorful figure in person. 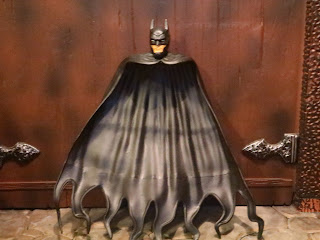 * I really liked Batman: Ninja but it was kind of an odd choice for Mattel to make that version of the Caped Crusader a build-a-figure for the DC Multiverse line. Starfire comes with the cape and head for Ninja Batman and while I may not be planning to build the figure, I presume I can always trade the parts off or sell it. Adding in the Collect & Connect parts is always a plus, still. 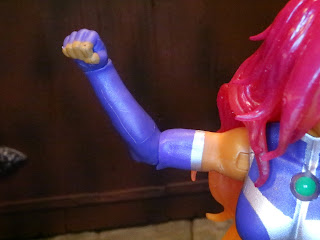 
* My only complaint with Starfire's articulation is that her elbows have a very limited range of motion. Seriously, not even 90 degrees. That's kind of lame, right? 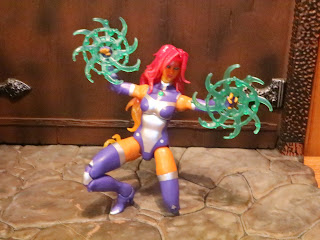 I'm really glad that Starfire made it out before Mattel lost the DC Comics license. Her last figure just wasn't that fantastic and this one is a great, modern improvement. She really is a fantastic looking figure who is bright, colorful, and really fills in the ranks of the Teen Titans nicely. I'm not planning to build Ninja Batman, though, so if anyone is interested hit me up and we'll work something out. I'm keeping Starfire, though, as she's a Great figure and an excellent addition to Mattel's DC line. Sadly, just as Mattel's figures have gotten back to the level where they once were, the line is ending. Darn.