The Scream of 31 Days of Toy Terror: Freddy Krueger from Toony Terrors by NECA 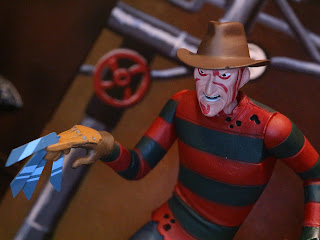 Guess who's making an appearance today for The Scream of 31 Days of Toy Terror?  That's right: Freddy Krueger from NECA's new Toony Terrors line! Easily one of the most recognizable of the modern movie monsters, Freddy Krueger definitely transcends the films he is in and has become a bona fide pop culture icon. Seriously, despite the fact that it's been almost a decade since the remake and 16 years since the last film in the main series, Freddy Krueger is probably still recognizable to most kids, even those who haven't seen any of the films. I grew up surrounded by Freddy Krueger despite never having seen any of the movies until at least my late teens. Still, we had Freddy on random kids toys, Freddy on television, Halloween costumes galore, and even Freddy hawking 1-900 numbers to tell you scary stories. Yup. Anyways, despite really only liking the third and first movies in the series, I've always had a soft spot for the character and I was intrigued by NECA's Toony Terrors line. The idea here is to take the modern movie monsters and design them in such a way as to make them look like they were part of a 1980s Saturday morning cartoon. Imagine Freddy, Jason, Michael Myers, and Chucky all running around and... I don't know, solving mysteries or something. Seriously, how crazy would that have been? Considering the number of cartoons based on R-rated properties we had back in the day, I can't believe it never happened. Anyways, let's check out NECA's Toony Terrors Freddy Krueger after the break... 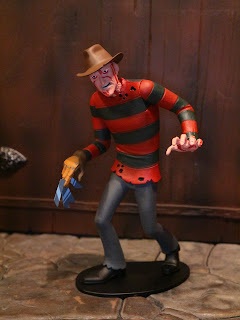 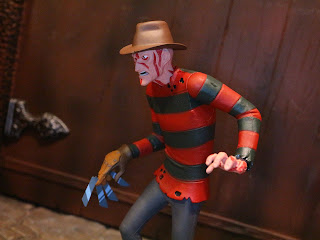 * I like the design of these. There's something very eye-catching about seeing a character like Freddy Krueger redone in this style. We've seen lots of stylized figures over the years such as Funko POP! and ReAction figures, but this is the first that really takes this animated route. The figure has a very smooth appearance, exaggerated, lanky proportions, and a nice amount of detail that gives some character but still keeps him looking simplified and stylized. 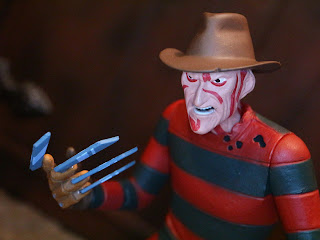 * The headsculpt is pretty good and easily recognizable as Krueger. There's definitely some lightly sculpted burn marks on Freddy's face but the darkened red lines rally help convey the damage done to Mr. Krueger. There was a fantastic magazine called Cereal: Geek that was focused on 1980s animation and in it they would take various 1980s properties and redesign them in animated styles. Having read many of their articles about the design process, it seems like NECA really used some of those same principles to believably recreate how an 80s cartoon Freddy might have looked. 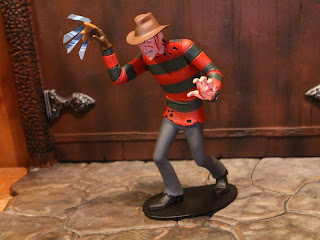 * This line isn't well articulated, as they're more like older NECA and McFarlane product, or even miniature statues. That doesn't mean NECA didn't squeeze some joints in, however, giving you some options for displaying ol' Fred. He's got swivel shoulders and swivel wrists to help convey different poses, and a balljointed neck goes a long way to allowing for far more expression than you would think. 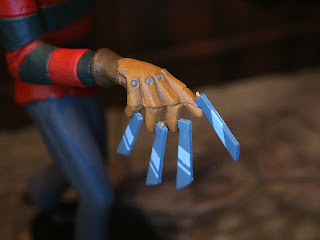 * I love the design of Freddy's clawed glove! It's simple but the blades have a bluish/ gray color scheme with little streaks of reflective light painted on them. It's very evocative of an animated design and yet the little streaks make the figure feel so much more dynamic. 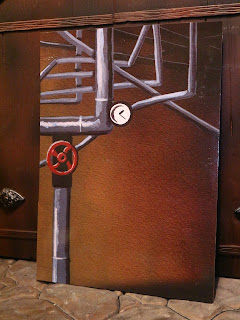 * Freddy Krueger comes with a cardboard backdrop that is actually the back of the package. It shows off some of the boiler room set, a key locale for Freddy, and definitely looks like it could be the static background from a cartoon. It's kind of a fun touch that reminds me of the cardboard backdrops that came with various toylines of the late 80s and early 90s, such as Monster Force. 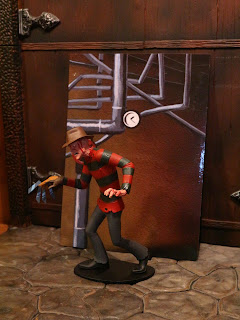 
* I like the backdrop concept but there are a couple things about it that get me down. For one, you actually have to cut it out from the back of the card. Why not just make it a separate piece of cardboard and stick it in the package? For another, there's really no way to use this but to lean it up against something. I really would have liked if Freddy's base had a slot or something to hold the backdrop upright. 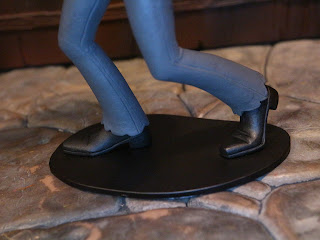 * Freddy Krueger does have a base to keep him standing, which is a good thing as he absolutely needs it to stand. Unfortunately, it was really a pain to get him on the base. The legs are one solid piece and they were warped. I had to really work them to get them apart enough to get him attached to the base. For such a simple piece, I'm not sure why they were so warped out of shape. 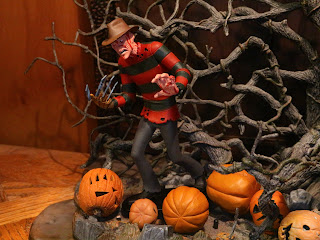 I was at Target back in August and stumbled upon most of the first series of these guys (Jason Voorhees was nowhere to be found). The Pennywise figures were cool, but Freddy was the one that appealed to me. I really like him, despite him being a pretty simple figure. I'd love to see NECA improve the bases on these, maybe giving them a bit more character and a better way of displaying the backdrop. The sculpt and paintwork is excellent, though. I don't plan on getting all of these but I'm definitely in for Michael Myers and Jason. Freddy's a Good figure and, for the right fans, he'll be a fun addition to your horror collection or Halloween display. Sweet dreams!