The Scream of 31 Days of Toy Terror: Lock, Shock, & Barrel from The Nightmare Before Christmas by Applause 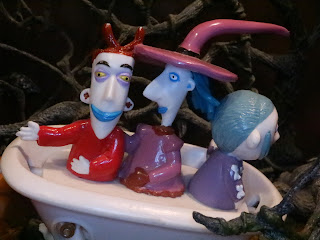 Back in 2017 I checked out Applause's Zero from The Nightmare Before Christmas and today I'm checking out Lock, Shock, and Barrel from the same line. This is an item that is one of my original childhood toys. I loved The Nightmare Before Christmas when it came out and since I never could find the Hasbro set of Lock, Shock, and Barrel I ended up with this set from a Suncoast video. Remember those? The same company that owns/owned them now owns FYE, so maybe Suncoast video stores just morphed into FYE? They are very similar! Anyways, they stocked a lot of Nightmare Before Christmas merchandise when the film came out and I distinctly remember my mom buying this for me back in 1993. The figures are a little small scale-wise when compared to Hasbro's but it was the first chance I can ever recall to get Lock, Shock, and Barrel's walking bathtub. This is a fun toy that's a bit nostalgic for me, so it's great for the week of Halloween. Mine does have a piece broken off, a small pipe in the back, and while I usually don't review my older toys that are missing pieces, this one gets a pass. Chalk it up to nostalgia and the Halloween season! Let's check these three rapscallions out after the break... 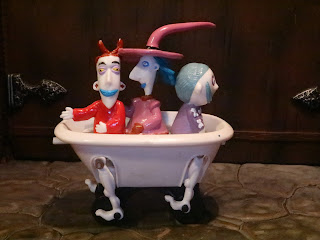 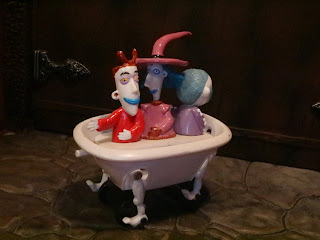 * Just being able to have Lock, Shock, and Barrel together in their walking bathtub was a big deal back when I got this. It's a cool toy that while not unlike a McDonald's styled toy, definitely feels like it's of a higher quality. It's made from a very durable plastic and the  non-removable figures are similar to other PVC figures of the era. 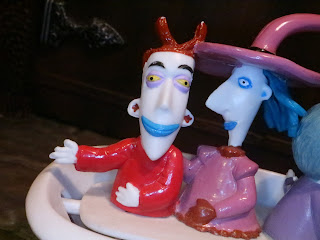 * Lock's at the front! The paintwork isn't the best on these but for a PVC figure sold loose, it's not bad. It's definitely recognizable, particularly with his horn like red hairdo and bright blue lips. What's he doing? Lock is definitely gesturing, so maybe he's in mid song? 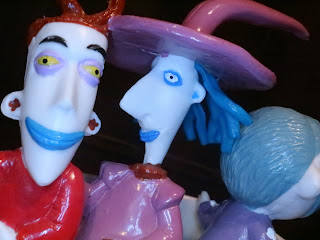 * Shock's in the middle. She's looking towards the front of the tub which makes me realize that everyone is looking in a different direction. It's kind of like a band on the front of an album cover. Her hat is massive, her hair is blue, and she has her hand on Lock's shoulder. 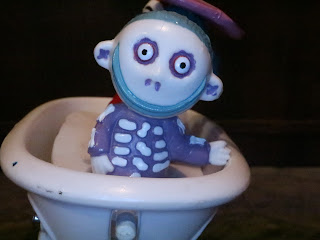 * Barrel is at the back with a massive grin on his face. Interestingly, the bones on his costume are actually separately sculpted details. That's kind of cool, right? 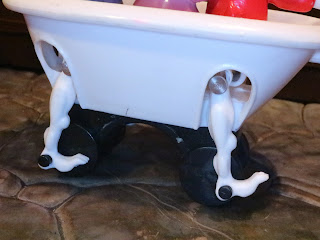 * The bathtub has a little gimmick: When you roll the wheels that the legs are connected to, the legs move as if they're walking and the trio rock back and forth. 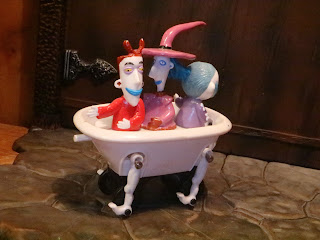 * The rocking feature doesn't work perfectly, though. It's a cool idea but it just never has worked very smoothly. 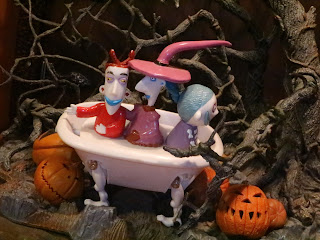 
For more of Lock, check out Lock from the Nano Metalfigs 20-pack.

For more Shock, check out the ReAction Shock and Shock from the Nano Metalfigs 20-pack.

For more of Barrel check out Barrel from the Nano Metalfigs 20-pack.

For more reviews from Applause's The Nightmare Before Christmas line, check out the following:
Zero
Posted by Barbecue17 at 10/27/2019