The Scream of 31 Days of Toy Terror: Cracked Tusk from Predator by Kenner 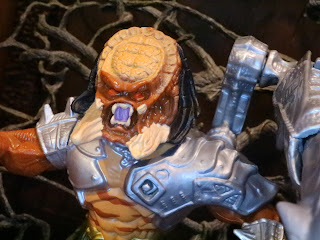 I've been pretty strict with keeping to the movie based theme of 2019's The Scream of 31 Days of Toy Terror so I hope you'll indulge me by allowing Kenner's Cracked Tusk Predator figure on the list. While he's not an exact copy of one of the Predators from the films, he definitely was based on the films at the time. You know, just given the ol' Kenner movie toy makeover. I've long shared my love of this toyline and I'm really excited about NECA's upcoming Kenner styled figures. Yeah, NECA has made plenty of Kenner tribute figures but now they're actually making figures in the 90s Kenner style. I can't wait. Today I'm checking out the first Predator figure I had and, during my childhood, one of the only two Predator figures I owned from the line: Cracked Tusk! Like so many of my childhood Alien Vs. Predator memories, it involved my childhood friend Freddy. I distinctly remember my friend Freddy bringing this toy over my house to show it off. It blew my mind then and I still think it's a pretty incredible monster toy. Let's check out Cracked Tusk after the break... 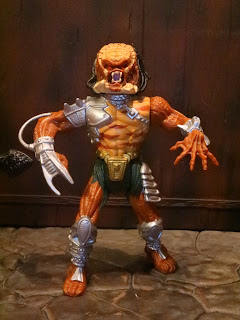 Accessories: Mask, chest harness with cannon, and a missile. 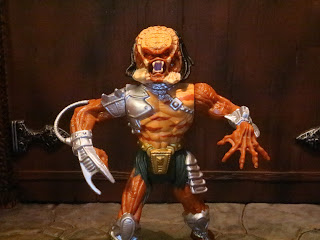 * To paraphrase Dutch from Predator upon seeing the titular creature, "You most definitely are one rather unpleasant looking bloke, fellow who is suffering from an oedipal complex!" Yeah, Cracked Tusk is not a pleasant looking guy, which probably made him so appealing as a kid. He felt dangerous! He was definitely more intense than a Teenage Mutant Ninja Turtles figure and seemed like maybe he was something that I shouldn't have been playing with yet. 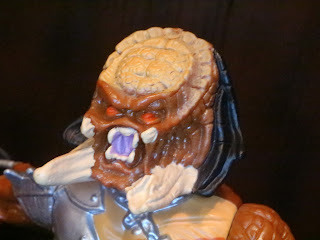 * The headsculpt is pretty cool. The Predators obviously have fairly complex portraits and Kenner did an admirable job of translating the general appearance of the film characters into an action figure. He's got dreadlocks, lots of different skin and bone textures, and his namesake bottom left cracked tusk. 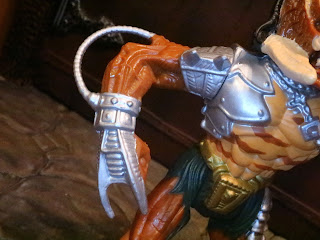 * While Cracked Tusk didn't come with any handheld gear, he did come with a cool metal claw that was a permanent part of his right arm. It's pretty awesome and, honestly, it's far better than most other weapons that were packaged with the Predator figures in the line. It's insanely menacing. It was like Wolverine claws on steroids. 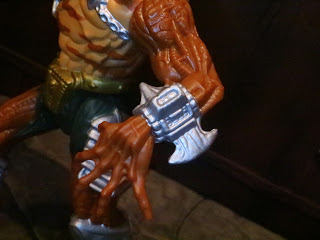 * On his left arm Cracked Tusk is sporting a really nasty ax like weapon of sorts. Imagine him using this to bisect a Xenomorph! This is seriously a very, very nasty looking tool! 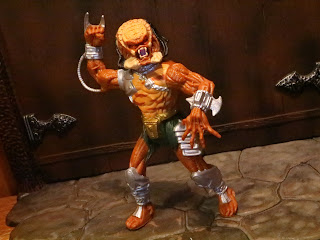 * Like the Space Marines and many of the Xenomorphs, Cracked Tusk is sporting the Kenner 5: Swivel hips, swivel shoulders, and a swivel head. He's a durable, sturdy toy who is incredibly fun to play with even with the limited articulation. 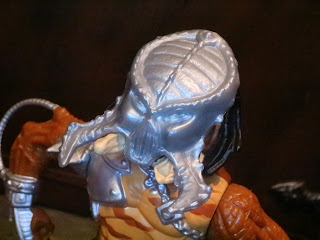 * Cracked Tusk has a removable mask to protect him during battle. It's really pretty cool looking and it stays on his face pretty well. 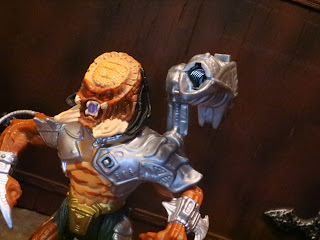 * Cracked Tusk also comes with a weapon that's kind of like the Predator's standard shoulder cannon. It attaches to his left shoulder and features the cannon mounted on a post, giving it two swivel joints so it can be aimed. Without the missile in it, it makes for a pretty cool looking weapon. 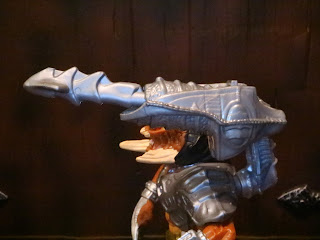 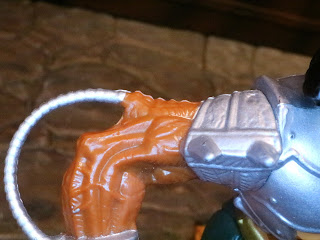 
* Why does the cord for the Predator's claw go into his arm? Wouldn't it make more sense for the cord to connect to his shoulder? That's kind of weird and it bothers me for some reason. 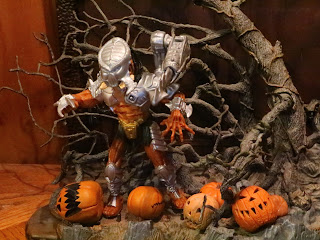 The Cracked Tusk Predator might be inaccurate to the films but you know what? It was a pretty cool toy! While Coleco maybe pulled it off first with their Rambo and the Forces of Freedom line, Kenner made quite an impact by taking R-Rated properties and peddling them to kids. It sounds horrible when you put phrase it like that but Kenner took the cool concepts for movies, stripped away the stuff that wasn't for kids, and left us with stuff that was pure imagination fuel. Terminator, RoboCop, Aliens, and Predator were all parts of my childhood not because of the films but because of the toys and the general story! Cracked Tusk is an Epic figure and one of my favorites.

If you're a fan of the Predator, I've also reviewed some other Predators including the ReAction Predator (Thermal Vision), NECA's Jungle Hunter and City Hunter Predator 2 pack, and Kenner's Alien versus Predator 2 pack.