The Scream of 31 Days of Toy Terror: Bossk from Star Wars: The Empire Strikes Back by Kenner 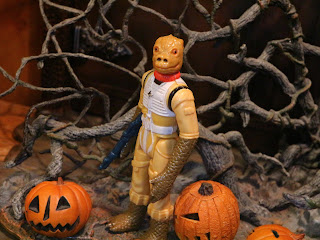 While most of the entries for The Scream of 31 Days of Toy Terror are based off of your standard movie monsters, both classic and modern, I always like to throw some twists and turns into the mix, too. While you may not think of the Star Wars films immediately when you think of horror films, there certainly are plenty of frightening creatures in the series. While I wasn't born until 1983, I definitely remember having Star Wars book and records sets that I was frightened of and of seeing the various clips from the series used for frightening effect in Muppet Babies, so when I was little Star Wars was definitely a little bit frightening. Creatures and aliens always make for good Halloween fare, no? Today I'm checking out a vintage Kenner Bossk from The Empire Strikes back. Bossk is one of my favorites and the Kenner figure has always been one of my favorites from the vintage Star Wars line. He's just such a cool figure and as one of the first figures from Kenner's The Empire Strikes Back line, he really shows off the advancements in sculpting and paint Kenner made during those early years. Let's check out this Trandoshan Bounty Hunter after the break... 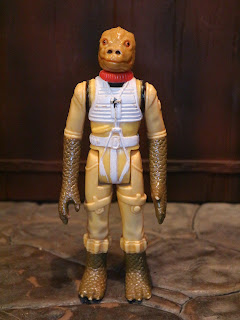 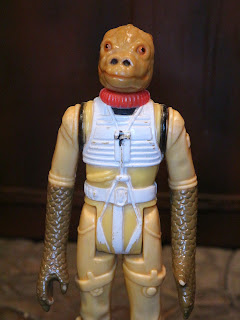 * I love Bossk. Love him, love him, love him! What's not to like? He's just incredible cool and Kenner did a great job on this guy. While the vintage Star Wars line definitely had some gaps in it, Kenner was always really good at finding interesting looking background characters to make toys of. While Bossk isn't quite a blink and you'll miss him character, he definitely was a figure Kenner clearly added to the line simply because he's so darn cool. 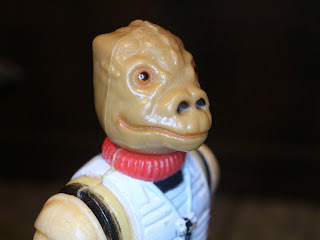 * The headsculpt is great on this guy. His reptilian features certainly helped him stand out from the crowd and the paint applications on his mouth, eyes, and nose, while minor, really help sell the character. He's so darn charming as a toy. 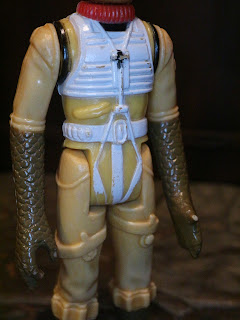 * Compare Bossk's outfit to nearly any figure from the 1978 Star Wars line and you'll immediately notice how much more impressive the detail is. Bossk's High-Altitude Windak Pressure Suit (which was used in a 1960s Doctor Who episode) is captured rather faithfully for the time. 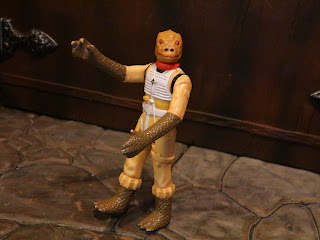 * Like nearly any figure from this era, Bossk has swivel joints. He's insanely durable, thought. Consider that he's nearly 40 years old and still a durable, well made toy. Seriously, my kid could still play with this and I wouldn't expect any breakage. 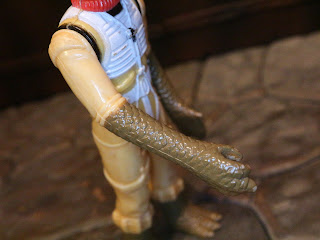 * The texture on Bossk's leathery, reptilian skin is excellent. I love the elongated arms, too. And the claws. Man, this guy is just one heck of a toy. This isn't really a review as much as me just talking about how great Bossk is. That's OK. 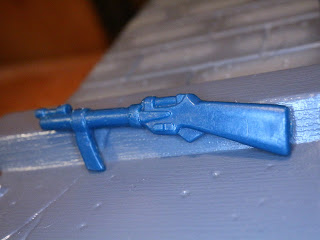 * I even love Bossk's blaster rifle. It's not only one of the most unique accessories from the Kenner era but it actually is fairly faithful to Bossk's Relby-v10 mortar gun. I like that Bossk can easily hold it by the forward handle or from the back, like an actual rifle or shotgun. 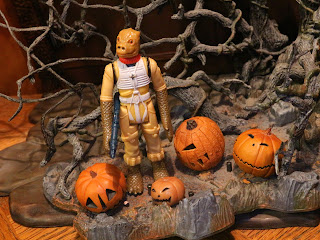 Oh Bossk! You just knew you were getting an eerie Epic rating, didn't you? Yes, of course you did! Bossk is one of my favorite Star Wars characters and one of my favorite Kenner figures. Maybe he's not as spooky as most other folks on this list but he definitely represents space creatures well. Star Wars has always had some excellent creature designs and Bossk is one of the very best. He's just so darn cool. I love you Bossk!!!

If you're a fellow Bossk aficionado then you may be interested in my reviews of the Black Series Bossk, the Hero Mashers Bossk, the Micro Machines Mini Heads Bossk, Bossk from the Bounty Hunters set, and Bossk's background appearance in the 4-LOM Mini Heads set.