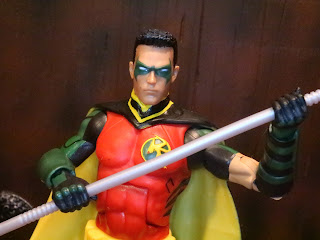 Today I'm checking out the fifth figure in Mattel's final series of DC Comics Multiverse figures and this time it's Tim Drake in his Red Robin Disguise. Having worn the tights since 1989, Tim Drake was Robin when Mattel began releasing DC Comics figures in 2003 (though Stephanie Brown took on the role for a while in 2004) and he held the title until 2009 when he became Red Robin after Battle for the Cowl (Damian Wayne stepped in as Robin at that point). When Mattel released Robin for the first time in DCUC, it was Tim in his then recent red and black outfit and in 2012 they released him in an earlier Red Robin costume. This is his most recent look, however, and makes for a great figure to further fill out the batfamily. While Mattel has neglected lots of older teams like the New Gods, the JSA, and previous Justice Leagues, they've been good about filling out the bat-family over the past two or three years. Let's check out Red Robin after the break and see how he stacks up among the other figures in this series. 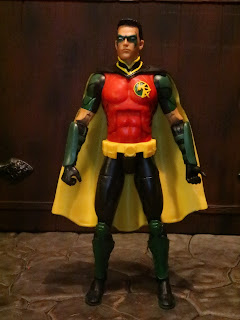 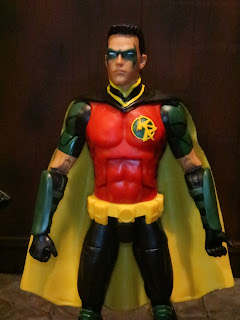 * Red Robin is an excellent looking figure. Overall, the costume design is fantastic and the colorful paintwork definitely brings everything to life. There seem to be a lot of unique parts here and everything fits together brilliantly. Again, seeing a figure this good just makes it all the more of a shame that Mattel won't be continuing this series in 2020. I'm hoping for good things from McFarlane, as their Fortnite figures have reportedly been quite good, but I have serious doubts that we'll see any kind of deep character selection nor figures that fit in with Mattel's releases. 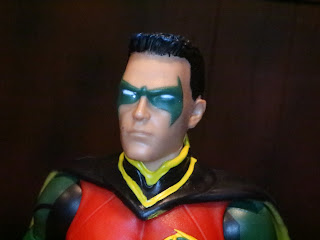 * The headsculpt is excellent. The hair looks good, the paintwork is clean, and the domino mask has the comic accurate white eyes. 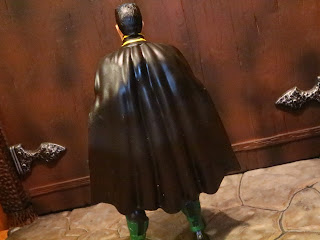 * Red Robin has a plastic cape rather than a soft goods cape but it's molded from a fairly flexible material that is quite rubbery. It's black on the outside, yellow on the inside, and it fits the figure perfectly. 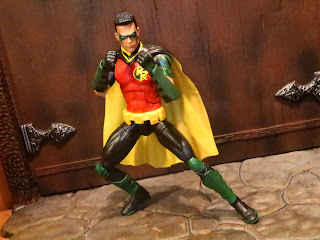 * Tim Drake has some of the best articulation Mattel has put into a DC comics figure. With a nice range of motion everywhere and double hinged elbows and knees, Red Robin moves like the master martial artist he is. This is really one of the nicest figures Mattel has put out. 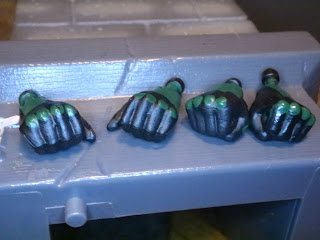 * Tim Drake includes two sets of hands: One for punching and one for gripping his bo staff. They swap easily and have green paint applications that match the red of Red Robin's costume. 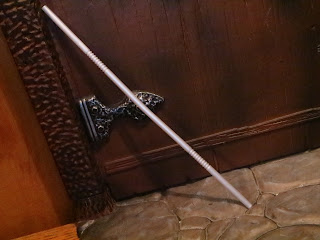 * Tim Drake usually uses a bo staff and this figure comes with one. It even has grips sculpted into the shaft to allow for better holding of the accessory. 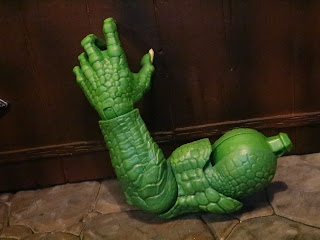 * Tim comes with Killer Croc'sleft arm as his Collect & Connect piece. I'm really excited to build this guy. As of this writing I now have all of the figures in the series, so I'll be getting to Killer Croc soon. Croc seems like he's going to be a really good figure. It's been a long time since Mattel's last comic based Croc (well over 10 years) so this guy is a welcome addition. 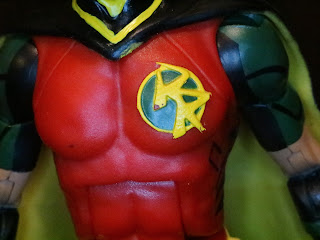 
* There are a few sloppy paint apps on Red Robin's chest, particularly on the "RR" logo and on the mantle of his cape. It's a small QC issue, but it does affect the overall look of the figure. 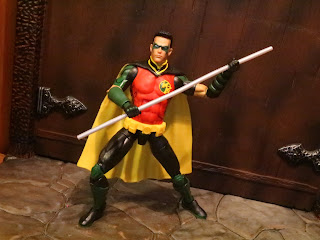 I was quite surprised by how much I like Red Hood. Seriously, he's one of the best DC Multiverse figures that Mattel has put out. The articulation is incredible, he has a relevant accessory, and he's quite faithful to his comic counterpart. Other than the paint slop on his chest, Tim Drake is perfect example of what is capable of with this line. I'll never complain about getting to fill out the bat-family or Batman's army of villains, so Red Robin is another his. He's a Great and a 1/2 figure and should definitely not be a figure you miss in this series.

I've reviewed a few other Tim Drake/ red Robin figures including the at the Lego Arkham Asylum Breakout which included a Tim Drake Robin as well as the Nano Metalfigs Robin that comes with the Batcave playset, the DC56 Robin- Tim Drake, and the DC102 Robin from the Series 4 20-Pack Figure Collector's Set.