The Scream of 31 Days of Toy Terror: Saurod from Masters of the Universe by Mattel 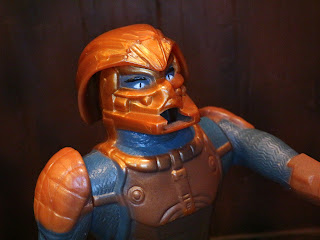 Most folks would not consider 1987's Masters of the Universe to be a standout in horror cinema. Or sci-fi cinema. Or any cinema, really. Yeah, the movie just ain't that popular. It has flaws, no doubt, but I do really like the movie. It scared me as a kid, however. Skeletor really did. Frank Langella is awesome in the movie and, fortunately, Super7 is finally working on an action figure of the character for the Masters of the Universe Classics line. There are some other cool creature designs for the film, too, and one of those is Saurod. Played by Pons Maar, Saurod is one of the new Evil Warriors introduced in the film (part of the "Curious Quartet") and one of the few figures from the film to get an action figure in the vintage MOTU toyline. For being a movie made for the purpose of selling toys, Mattel sure didn't put a lot of effort into giving the film a robust toyline. Blade, Gwildor, and Saurod were all we got. Since I like the movie, love MOTU and Saurod, and love going off the beaten path for 31 Days of Toy Terror, today we're checking out my original childhood vintage MOTU Saurod figure. Enjoy! 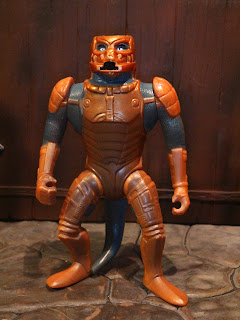 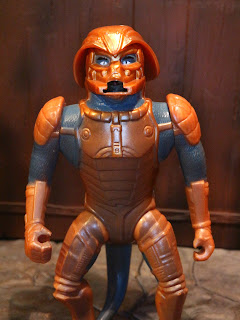 * I've always liked Saurod. He's not one of my absolute favorites or anything, but he's a cool looking toy who was fairly mysterious. While Mattel released a MOTUC version of Saurod that was faithful to the film design from William Stout, the toy version isn't too far off for being a toy from the mid-late 1980s. I like his copper armor. I stands out in the MOTU line, as I can't really think of another character offhand who had this color scheme. There's quite a bit of detail in the sculpt and the metallic sheen on the armor is impressive. 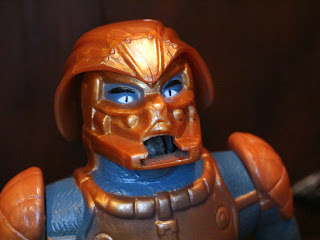 * The headsculpt is pretty impressive too. It's a hard plastic head that features Saurod's massive helmet. Honestly, it wasn't until rewatching the movie again in the mid-2000's that I realized Saurod is wearing a helmet and that his eyes are peeking out from underneath the helmet. I always thought he was just a weird, lizard-like alien as a kid. My helmet was always removable but it seems other Saurod figures have there helmets glued on quite firmly. If you pick one up used, make sure you get a helmet as it'd be a pain to track one down. 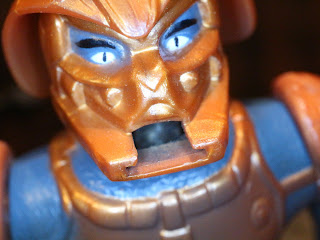 * I really couldn't capture the best part of this figure on camera but Saurod actually shoots sparks out of his mouth. No, he doesn't do that in the film (he was supposed to spray venom or something at one point but like so many other things planned for the film, it never happened) but do you need an excuse for a figure to shoot sparks? 32 years later and my figure still shoots sparks like crazy! I love it! I love the smell, too. I can't explain why. 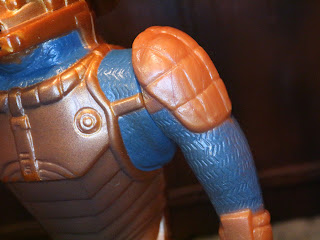 * I believe Saurod is supposed to be wearing chain-mail armor of some sort over his reptilian skin and, if you look closely, you can see how the sculptor attempted to capture the layered look of Saurod's armor. 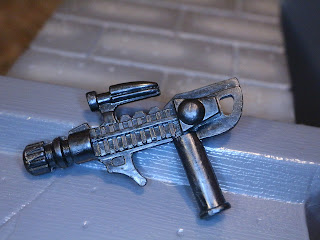 * Saurod's pistol isn't one of the most expensive MOTU accessories but it's definitely not an easy find. Fortunately, I've had mine since childhood and it is still in lovely shape. It's a really cool pistol with lots of neat details. It fits easily in either of Saurod's hands and just makes him seem that much tougher of a dude!

*I don't own it anymore but Saurod did include a minicomic, "The Cosmic Key," which also came with Blade and Gwildor. 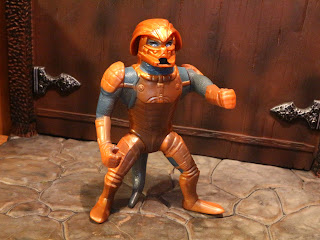 * Saurod has less articulation that most MOTU figures in the vintage line (he's missing the swivel waist and swivel head) but he does have a sleeker build, which helps him to standout among the typically more muscular barbarians. This is definitely more fitting based on his movie appearance. It also kind of makes him fit in with the Snake Men if you think they need another member. 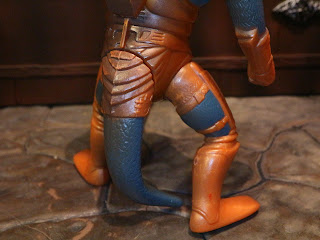 * Saurod's tail always seemed a little awkwardly placed. I wish it curled back, so he could rest on it to help keep him standing. 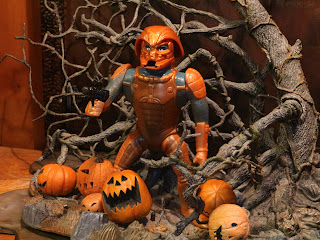 If you think I'm going to give most vintage Masters of the Universe figures anything less than an Epic rating, well, you're quite wrong. Coming out related to the movie and near the end of the line, Saurod was definitely not a very popular figure. He's not a super common figure but he's not quite a "grail piece" yet, either. He's pretty cool, though: A spark shooting reptilian bounty hunter in metallic armor. Who wouldn't dig that? Maybe he's not as spooky as some other figures on the list but he's still a great monster for The Scream of 31 Days of Toy Terror!


If you're a Saurod fan, check out my review of the Masters of the Universe Classics Saurod as well.