The Scream of 31 Days of Toy Terror: Transforming Action Set from Micro Machines: Aliens by Galoob 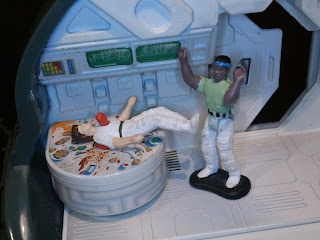 I'm very, very excited about today's installment of The Scream of 31 Days of Toy Terror as it combines two things I love: Micro Machines and Aliens! Yes, today I'm checking out the Xenomorph shaped Transforming Action Set from Galoob's Micro Machines: Aliens line from 1996. Galoob had amazing success with Star Wars and a moderate success with Star Trek, so they were definitely exploring for another big property. With a renewed interest in science fiction, between 1996 and 1998 Galoob tried to launch multiple successful lines started from a number of properties: Men in Black, Predator, Starship Troopers, Babylon 5, The Terminator, and Aliens. Aliens was definitely my favorite of those properties at the time of release and while I never managed to track down the Action Fleet scaled vehicles, I did manage to get all three of the regular packs and the transforming set. The regular sets probably came out in the summer of 1996 but I definitely got the Transforming Action set in late 1996 or very, very early 1997. I know I got it from a Toys 'r Us and I played with this thing non-stop. While the Micro Machines line didn't contain the entire cast, I drafted various Star Wars: Action Fleet and Jonny Quest figures to fill in as the missing crew. Based on the original Alien, a masterpiece of science fiction and horror, this Micro Machines set is sure to deliver thrills and chills! Let's check it out after the break... 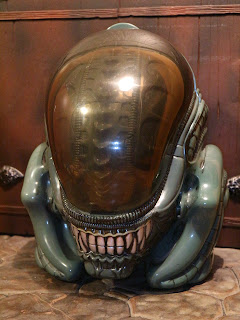 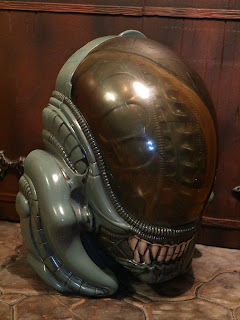 * The thing I've always loved about Galoob's Transforming Action sets is that they look almost as cool when closed on display as they do opened up. As a pre-teen/ young teenager, these things just seemed really, really classy and having a bust of the Xenomorph seemed both edgy and classy. It's a cool sculpt, complete with excellent detail on the Xenomorph's hideous teeth and some nice sculpting on the dome. The smoky dome cover is removable, so if you purchase one of these loose make sure it's not missing. It looks more like a Xenomorph from Aliens rather than the Big Chap from Alien, but I never really cared about that as a kid and I'm not going to start now. This thing is absolutely wicked! 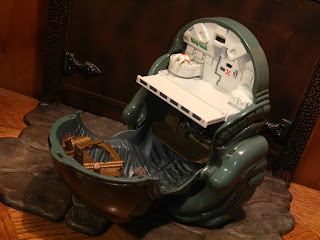 * Over the years Galoob experimented with different design schemes for the Transforming Action Sets but the Aliens set features the classic method of having the face fold down to expose the small universe inside. It works really well and the base is heavy enough to keep the playset from falling over. The set opens up to reveal two scenes from aboard the Nostromo and the surface of LV-426. 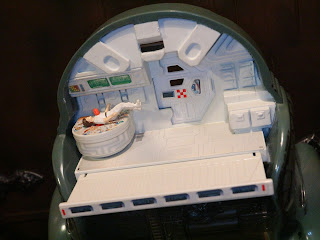 * On the upper floor is a recreation of the dining room, these setting for one of the best movies scenes in history. You've got a dining table, lots of white, sterile looking cabinets and such, and a pull out floor. Yeah, the floor pulls out to give you more space here. It's a nice feature and it helps keep everything from feeling too cramped. 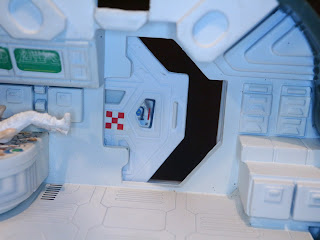 * There's a door at the back that slides open and closed. There's nothing back there, though with some ingenuity it could be attached to another playset of any sort. The labels look great on this set and really help bring things to life. 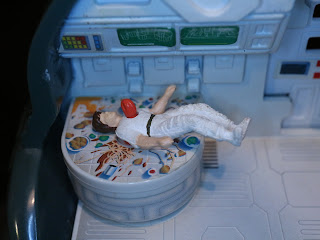 * Oh, did you notice Kane atop the dining table with an alien chestburster coming out of his torso? Yup! Galoob really went there! Kane is removable, although he doesn't stand on his own, plus he has a giant hole in his chest. He's made to lay across the top of the table over the chestburster. The table has a great sticker on it with all kinds of spilled food and such. Even better: There's a dial around the back of the set that makes the chestburster rotate and Kane convulse wildly. This is one of the coolest things Galoob ever did! 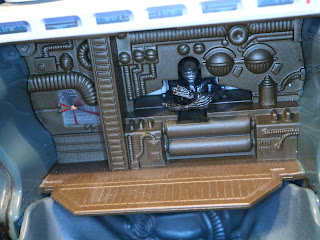 * The middle layer of the set shows off the innards of the Nostromo. It has a distinctly different look from the kitchen, as it's much less terile and inviting and far more mechanical and claustrophobic. It's just a sticker, but the left side does show of the many passageways running throw the bowels of the ship. There's plenty of random mechanical stuff here, too. But wait... what's that in the middle? 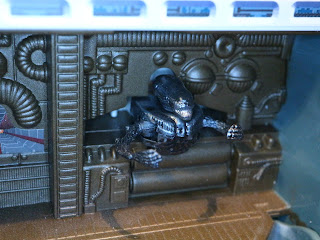 * Yes! Push a button on the back of the set and the Big Chap Xenomorph leaps out of the machinery to grab an unsuspecting figure! As you push the button his arms swing out from the body so that when you pull him back he can grab hold of a his victim. It's pretty cool and definitely a fun feature for an Alien themed set. 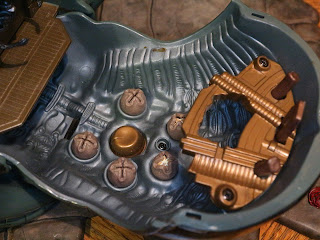 * The bottom floor is the largest. It's designed to look like the interior of the derelict ship with lots of H.R. Geiger styled eeriness, random platforms, and a small nest of Xenomorph eggs. 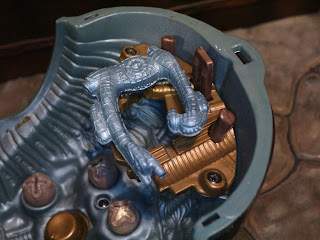 * The Derelict Ship is shown on the back of the box parked atop this small platform. It's a cool space to store a ship or to have the microfigures included with the ship descend down from. 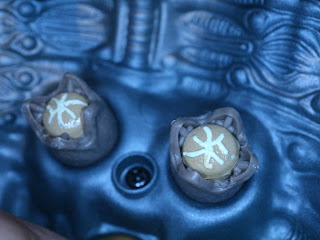 * The Xenomorph eggs actually hatch! Push the copper colored button and two of them will hatch open. The egg shells are made from a cool rubbery material that has still held up well after all of these years. 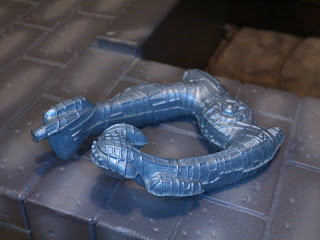 * The Derelict Ship is a cool looking alien design for a vessel, although the ship did come with one of the standard packs of figures and vehicles. Like most other Micro Machines flying vehicles, there's a hole on the bottom for placing a display stand (which wasn't included in this set). 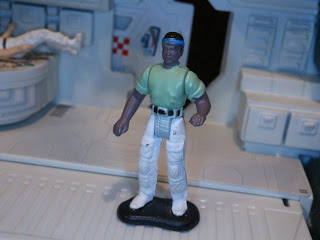 * Dennis Parker is the chief engineer of the Nostromo and thus he spends a lot of time down in the ship's inner workings. The figures in the Aliens line are larger than the standard Micro Machines figures and even larger than the Action Fleet figures. They're articulated like the Action Fleet figures, although they have bases. In that respect they're much like the Jonny Quest and Predator Micro Machines. 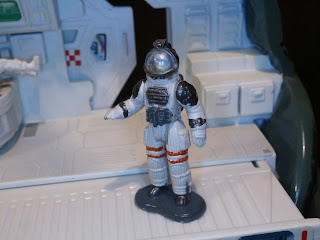 * This could really be anybody but the packaging calls this Dallas. Dallas is the captain of the ship, so I guess he deserves a figure, right? He's really nicely done with quite a few intricate paint details on such a small figure. Heck, even check out how cool the translucent visor on his helmet is! 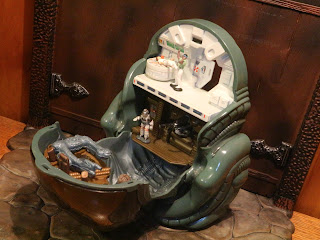 Epic!  This isn't just one of my favorite Micro Machines sets, it's probably one of my favorite toys of all time! I cannot tell you how many evenings I spent using this and the Micro Machines Millennium Falcon to reenact my only Aliens stories. Galoob was one heck of a toy company and nearly every Micro Machines product they released was full of impressive play features that really stimulated the imagination. It still disappoints me that Hasbro has the Micro Machines license and squandered it. With the popularity of small toys and the rising cost of plastic items, now seems like it would be a perfect time for Hasbro to revive the brand and start courting classic and modern properties.

If you're interested in more of Arthur Dallas, I've also reviewed the M.U.S.C.L.E. Dallas minifigure from Alien: Pack D.

For more of Dennis Parker check out my review of M.U.S.C.L.E. Pack B with Parker.