The Scream of 31 Days of Toy Terror: Michael Myers from Halloween: Mezco Designer Series by Mezco 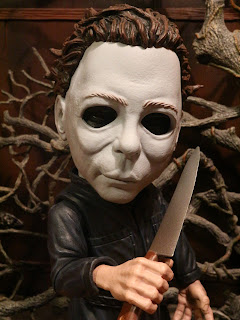 There's someone who usually makes some sort of  appearance during 31 Days of Toy Terror: Michael Myers! Michael may show up more than once this year as well, if things work out according to plan! For today's installment of The Scream of 31 Days of Toy Terror I'm checking out a very cool new Michael Myers figure from the Mezco Designer Series. I actually reviewed the Sam in this style back in 2017 so I was familiar with the line. I really liked Sam, but let me tell you: Michael Myers is even better! Mezco has definitely added in more articulation here making him even more fun to play with and display. Michael Myers is one of the undisputed Halloween icons (I put him up there with Sam, Jack the Pumpkin King, Elvira, and David S. Pumpkins) and this is his season, so let's let him loose, shall we? More after the break... 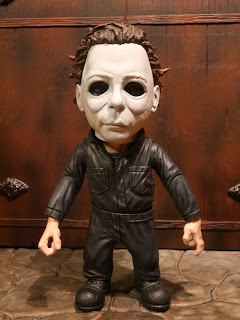 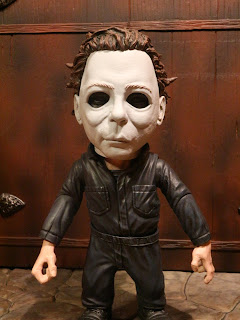 
* I really like the style of these. While they're not at all "cutesy" or chibi, they do have shorter legs, longer arms, and a head that's at least twice as large as it should be. That being said, it looks really cool and definitely has a designer vinyl feeling to it rather than feeling like a POP! or something similar. This is absolutely Michael from John Carpenter's 1978 classic, and not based on any of the sequels or remakes. Don't get me wrong, I like some of those films, but Michael definitely looks the best in the original film (though I love his look in the 2018 film, too). 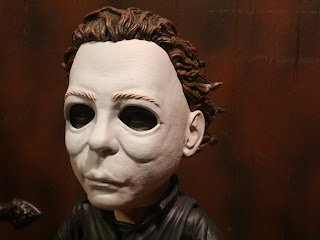 * The headsculpt is incredible. Seriously, despite being oversized the mask doesn't look stylized at all. It looks very authentic and true to the film. Heck, it might be one of the best renditions of the Shape in plastic I've seen. There's a vinyl molding line down the right side which actually even looks like part of the mask. That's gotta be intentional, right? Even the texturing looks like a real latex Halloween mask. 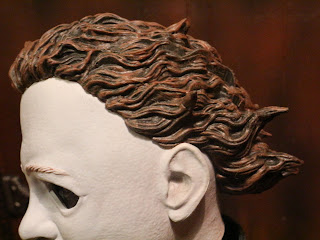 * The hair is superb Seriously, this is really, really good sculpting on the hair. It's full of detail and looks just spot on. 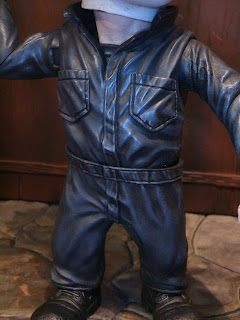 * Michael's boiler suit is one of those mysteries like the Xenomorphs from Aliens or Han Solo's coat from The Empire Strikes Back: In reality it was probably a different color but, with lighting, it looks dark blue. Michael Myers is typically always depicted as wearing dark blue and this suit looks excellent. There are different colors present that blend together nicely and the detail work on the various wrinkles and such are perfect. 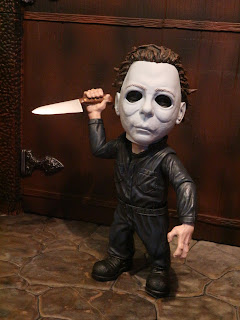 * Michael Myers has limited articulation, but that doesn't mean you won't get some cool poses out of him. His balljointed head has an incredible range of motion which is so, so important for Michael Myers. He definitely is a character who expressed himself through how he tilts his head and it's fun to give him different expressions that way. He also has those weird elbows that swivel from a straight position to a 90 degree angle. I haven't seen those for awhile, have you? They work well here, though, so I'm good with them. 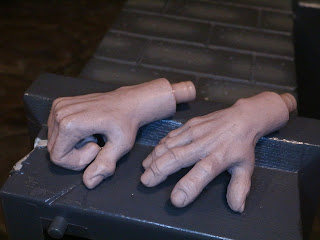 * Michael Myers has two right hands that swap out easily: One for holding his butcher knife and another open, perfect for just standing around starting or for holding the jack o'lantern he comes with. 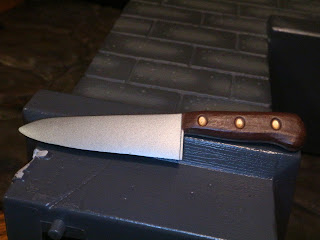 * Michael always has to come with his knife, doesn't he? This is a great accessory with a nice wood colored handle complete with painted rivets. He looks very menacing holding it! 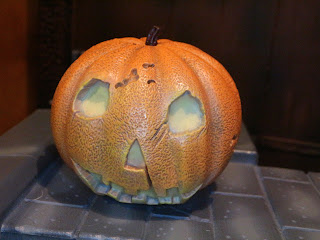 * Michael also comes with the classic Halloween jack o'lantern. I love the look of this pumpkin! The paint work is awesome and the sculpt is so, so good. I love how you can even see the knife slit where the nose was carved. 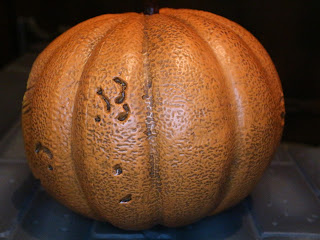 * Turn this beauty around and you'll see that the pumpkin has some excellent texturing, very pronounced ribs, and even some wear and tear either from pests in the pumpkin patch or wear and tear from traveling to the market. Beautiful work! I now want to write fan fiction about this pumpkin, telling the story of Halloween from its perspective. 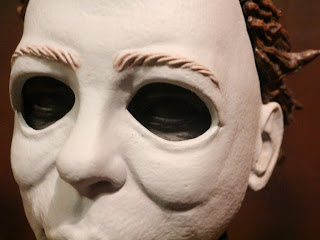 * There's one thing about this figure which I'm not sure how I feel about and it is Michael's eyes. Inside his mask are definitely some sculpted eyes, but they're simply cast in black. Yes, you can see Michael's eyes in Halloween, but I'm not sure I prefer this way of making them look shadowy versus just leaving the eye holes of the mask recessed, but still flat and shadowy. It's a good effort, but I'm not sure it's the best solution. 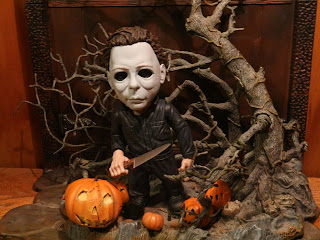 I love this guy. Honestly, he's one of my favorite Michael Myers figures in my collection. The design is really unique and stands out from so many other offerings and he's equally fun to pose and just have on display. While he's not a straight up action figure like Mezco's One:12 Michael Myers or one of NECA's offerings, he's nearly as fun as those figures. For years Michael has been neglected when it came to collectibles but over the last year or so he's finally getting his revenge. This is an Epic offering and a real treat for fans of the film.