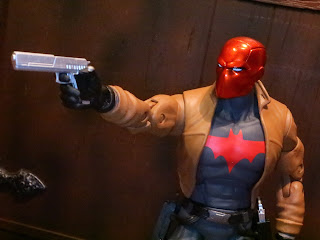 Today I'm reviewing an action figure from... DC Collectibles? Yes, that's right: DC Collectibles? Man, where have they been? The last time I reviewed a DC Collectibles figure was January of 2019. If you looked at the toys I had on preorder a few years ago you would probably have seen a huge percentage of it was from DC Collectibles, but over the past few years they've been marching towards irrelevancy. Over the past few years they've cancelled way too much of the product they solicited and now they're mostly releasing their DC Essentials line. The DC Essentials line has been out for a couple of years now but it's mostly been characters who have had multiple releases. Of course, when I saw that DC Essentials was putting out a Red Hood I had to preorder him. Jason Todd is one of my favorite DC characters (he's easily my favorite "Robin") and there was never a great standard Red Hood. The Red Hood and the Outlaws figure was pretty good but he had those weird arm blades that Red Hood barely ever wore in the comics, and the Arkham Knight Red Hood is incredible but he's definitely not a traditional version of the character. This guy was going to be my stand in on my Mattel shelf...but guess what? Mattel went and released an actual Red Hood in the last series of DC figures they're putting out after having the license for 19 flipping years (they released this version, too, but it's not his most well known look). So that's how I ended up with two Red Hood figures within one week. We'll start with checking out DC Collectibles' Red Hood, and I'll probably get to Mattel's later this week or early next. Let's check out how ol' Jason is faring after the break... 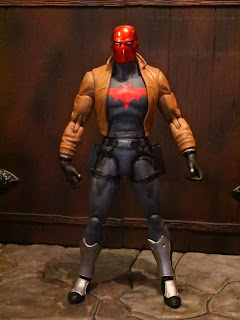 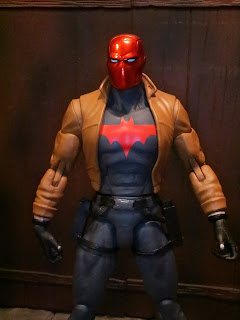 * This is my first DC Essentials line and I really like the very clean, very neat style of it. This is definitely a DC Rebirth version of Jason Todd/ Red Hood, but it doesn't have a particular artists' touch to it or anything (so far as I can see at last). The paintwork is neat and clean and the jacket looks really good. The coat is a separate piece over the torso, though taking it off wouldn't do any good as the sleeves are sculpted as part of the arms. In case you haven't picked one of these up yet, Jason Todd is just an 1/8th of an shy of 7 inches, so he definitely is taller than Mattel's DC figures. He'll fit most other DC Collectibles lines, however, (but not the shorter DC Icons). 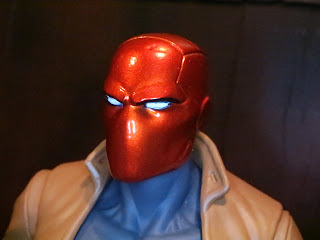 * The headsculpt is awesome. Jason's helmet looks phenomenal and has a great metallic sheen to it. There's some techy details on the sides (not unlike an Iron Man helmet) and some very striking white eyes. 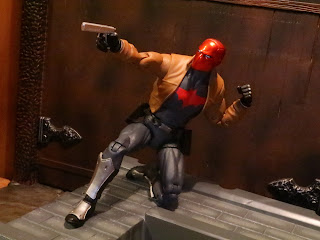 * If Jason Todd is representative of the entire DC Essentials line, then this is a very high quality action figure line. For the most part the joints feel extremely sturdy and well designed with an excellent range of motion. Red Hood is incredibly fun to pose and play with and he feels way more durable than nearly any other toy I've ever purchased from DC Collectibles. I believe they reuse a lot of base bodies in this line but if it helps keep the figures up to a higher standard than I say got for it. 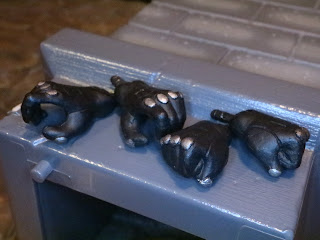 * Jason Todd comes with two interchangeable pairs of hands: A pair of fists for punching and a pair of pistol grips for pistol gripping! Yeah, he's gotta have gun grips since that's what he likes to use against his foes! They swap easily, feel sturdy, and give you some versatility when posing this guy. 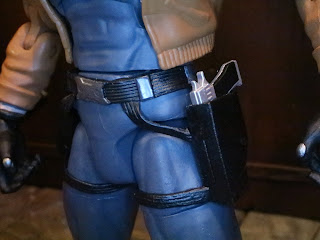 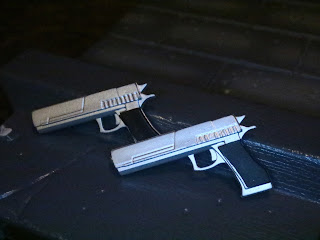 * Jason Todd comes with two pistols. The sculpts are excellent and the paintwork just enhances that. He holds them well and looks great wielding them in a variety of poses. 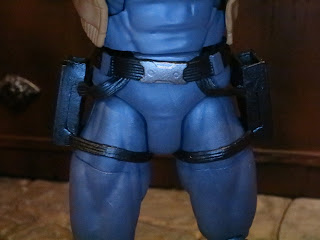 * My only complaint with the figure is that the holsters are a separate piece made from a rubbery material. That's not a problem in and of itself, but the straps feel like they're being taxed every time you put Red Hood in a stance that involves moving his hips. I'm fearful that one day they'll snap. Be careful! 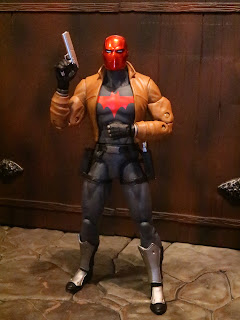 This is my first DC Essentials figure and I'm quite satisfied with it. I do wish we'd gotten more accessories and perhaps an alternate unmasked head, as you're paying around $23-$26 dollars for this guy. Think about what companies like NECA include for that price and you'll definitely wish Red Hood has another extra item or two. Still, he's a very solid Red Hood figure and this gives me some confidence that these guys might be worth picking up in the future if the character selection continues to expand. DC Collectibles has released over 20 figures in the series (Red Hood is #18, but I don't think that counts 2-packs and such) so hopefully they're trying to stick with this line. Of course, who knows what McFarlane's DC Comics toys will look like? Not since DCUC have DC fans had a long running, consistent toyline to rival Marvel Legends, but DC Essentials at least seems like DC Collectibles is back and trying again. This Red Hood is a Good and a 1/2 figure that should satisfy fans of the character jonesing for someone to pal around with Bizarro and Artemis.